Hopdoddy isn't messing around this 4/20. The High Roller burger special comes with a spoonful of cookie dough on the side. courtesy Hopdoddy
Somewhere along the way, what started as a jokey counterculture half-holiday for stoners has become a mainstream, commercialized faux-holiday in the vein of the now-ubiqitous national ____ days. Just as we see restaurants creating specials and hosting events for National Macaron Day or Pi Day on March 14, brands are cashing in on the pop culture parody of 4/20 — even in states like Texas, where marijuana is illegal.

Every year, there are more emails from PR reps advertising 4/20 specials for stoners. In one press release, major national burger franchise Hopdoddy advertises an over-the-top burger made with Flaming Hot Cheetos as great for "stoners and adventurous eaters." It's hardly tongue in cheek anymore; brands such as Pepsi, Carl's Jr. and Totino's Pizza Rolls have all used 4/20 advertising targeting stoners. MarketWatch reported on the commercialization in a 2016 trend piece:

"This type of recognition is helping the industry overcome one of its greatest obstacles: legitimizing a previously black-market trade.

“'The increase in tongue-in-cheek advertising really runs hand-in-hand with overall acceptance of the industry and the emergence of this business from the shadows,' says Aaron LoCascio, chief executive of VapeWorld, a vaporizing product wholesaler and retailer."


There's a sad irony in celebrating the holiday in a state that's cracking down on CBD oil products despite the fact that they contain no THC. Some pot users may feel like celebrating Dallas' new cite-and-release policy for marijuana possession, but the Dallas Police Department's first stats on the new policy showed that, of the 23 people cited for possession since it went into effect Dec. 1, every person cited was black or Latino. Studies consistently show that white people use marijuana just as much as blacks and Latinos do.

The bottom line: Just because marijuana is illegal doesn't mean people are going to stop consuming it. That's never more evident than on 4/20.

Whether you use pot or just like an excuse to eat as if you do, we've rounded up a few 4/20 specials and some of our favorite dishes to eat while (responsibly) stoned off our gourds.

Hopdoddy's High Roller
Locations in Uptown, Preston Center, Fort Worth and Addison
This one-day-only 4/20 special "encompasses various flavor cravings," according to a press release. The burger, seasoned with taco seasonings, is topped with pepperoni and mozzarella, Flamin’ Hot Cheetos ketchup and cool ranch fries served between two hemp seed buns. Just to drive the point home, it's served with a spoonful of cookie dough on the side.

Zalat's chicken and waffles pizza.
courtesy Zalat
Zalat's chicken and waffles pizza
Locations in the Cedars, on Fitzhugh and in Plano
With creations like a loaded baked potato pizza and another pie covered in elotes, Zalat knows its target audience. Every year, the restaurant creates a specialty pizza available starting at 4:20 p.m. on 4/20. This year, it's a chicken and waffles pizza with a maple syrup base, mozzarella, crushed red pepper, bacon and fried chicken tenders and topped with a maple syrup swirl. The 14.2-inch pizza costs — you see where this is going — $14.20. "You would be salivating if your mouth wasn’t so dry," Zalat posted on Facebook.

Nothing says "I am very sober" quite like eating spoonfuls of cookie dough.
courtesy Dough Dough
Just straight-up cookie dough at Dough Dough
5915 Forest Lane
In case you missed the memo, Dallas recently got its first restaurant specializing in cookie dough. Order flavors like Brownie Batter Up and Birthday Party, and top your scoops with a bevvy of toppings like candy, pretzels and sprinkles. Ever get so high you eat a 27-pond gummy bear filled with regular gummy bears?
courtesy IT'SUGAR
A 27-lb. gummy bear at IT'SUGAR
2401 Victory Park Lane
It doesn't seem so coincidental that a candy store selling giant novelty sweets would open its doors on 4/20. The new Victory Park store opening Friday sells everything from "over-the-top indulgences to ridiculously funny specialty items — like an all-marshmallow cereal box, IT’SUGAR’s exclusive line of Saturday Night Live Candy, the World’s Largest boxes of Nerds, Sour Patch Kids and an upcoming giant box of All Pink Starbursts," according to a press release. It specializes in giant candy like a 27-pound gummy bear filled with regular-sized gummy bears and a 2-pound Rice Krispies treat. 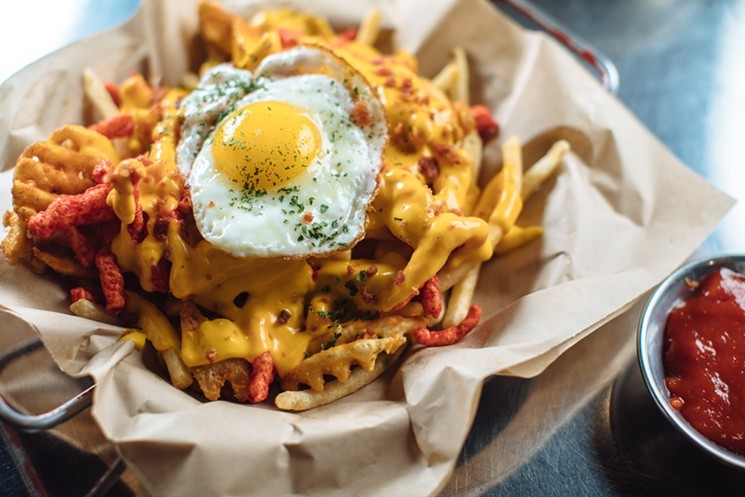 We feel stoned just looking at this Ddong Ggo dish.
Kathy Tran
Nacho Cheetos French Fries at Ddong Ggo
With a name that translates to "butthole" and a $25 dish called Cheese Island — featuring fried chicken and french fries served atop a lake of gooey melted cheese — Ddong Ggo is made for days like 4/20. Try the Nacho Cheetos French Fries, a pile of fries and Flaming Hot Cheetos topped with nacho cheese sauce and a fried egg.