Urban8 Brings the Food Hall Trend to the Colony

Forthcoming food hall Urban8 will house seven restaurants and one bar. Kristen Collie Photography
Five miles from Plano’s Legacy Hall, a new structure sits in the Colony off Highway 121. Inside, the sounds of pounding and power drills can be heard reverberating off the walls as it nears completion. It is the site of a new free-standing food court called Urban8, part of the food hall trend sweeping DFW.

The food court will consist of seven chef-driven restaurants and a cocktail bar, hence the name Urban8. The building is 8,500 square feet and can seat 220 people inside, with space for 60 additional people on the patio. The space celebrates its grand opening Aug. 9. It's smaller than the typical food hall, but convenience and quickness will be a defining factor, Rose says. According to the website, Urban8’s roster has everything from pho to Tex-Mex:
“Chef-driven, to me, means that the person that created the brand and that created the food menu is in direct, daily contact with people serving the food,” Rose says. “They care more than a franchisee might or a big national company.”

The idea for this new concept came from a sketch drawn on a Jason’s Deli napkin in Colorado Springs, Colorado. Rose says he was driving by a mall one day after helping his son get set up for college. He was hungry.

“I didn’t want junk food, and there’s junk on every corner,” Rose says. “I thought, ‘Man, why doesn’t someone just build something like this where I can just pull in, have choices and convenience and then leave?’”

Like any entrepreneur with a good idea, Rose needed some money. Month by month, he attended financial seminars, pitched his idea, and was shot down left and right. Eventually, Rose came across an 83-year-old man named Weldon Wilson, who runs a family investment firm out of California called Kramer Wilson Co. Although it took Rose four tries to garner Wilson’s interest in the project, the investor and his firm were finally on board.

The price for land in Colorado, where Rose had the idea, was cost-prohibitive, he says. His cousin, a commercial realtor in Dallas-Fort Worth, convinced him to go to Dallas.

To find the restaurants Rose would involve in the new food hall, he enlisted the help of his search engine optimization company, Cixx Five. It was a kind of scientific method, he says. If he was interested in involving a Mediterranean restaurant, he asked the SEO company to find out how many people were searching for that kind of food locally on Google, Bing and Yahoo. If they were not searching for it, he did not go for it, he says.

“I also hired a guy to cold-call restaurants who had a four and a half or higher rating with Yelp and Google, and that’s a pretty good indicator that people are liking their food,” Rose says. “If they had a good track record at multiple locations, I would let them interview.” 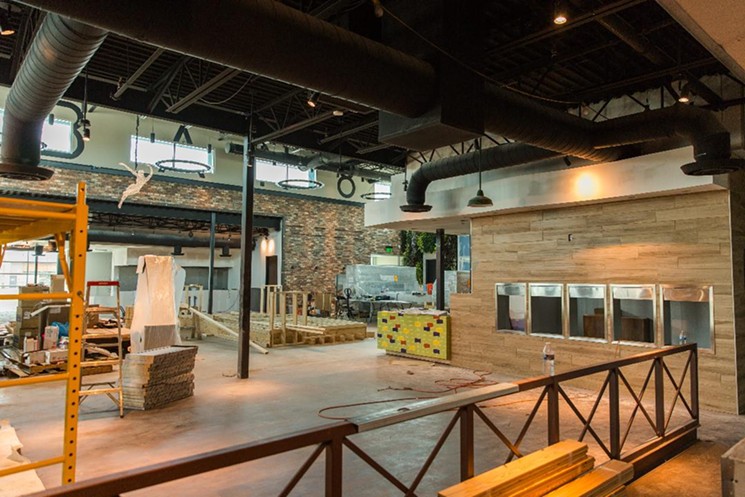 The interior at Urban8.
Kristen Collie Photography
Rose says it's not a secret that sit-down restaurants are struggling. People want communal dining with choices, convenience and affordability. People want to feel like they are a part of something, he says. That’s the trend.

“If somebody wants more hours, no problem,” he says. “We’re all a family. Our collective success is our individual success, and their success is my success.”

One might think Legacy Hall, a few miles away in Plano, could threaten Urban8’s business. Rose isn't concerned. Parking at Urban8 is nothing compared to Legacy Hall, he says. People can pull in, park easily and order within five minutes, he says. He's also planning events at the forthcoming food hall.

“They have live music, but they’re not gonna have UFC fighters coming in for autograph signings. They’re not going to have dueling pianos,” he says. “I’m not dissing [Legacy Hall]. It’s awesome. It’s just a different experience.”

Cathy Green, Urban8's vice president, says she spends a lot of time going door to door and spreading the word on social media. The plan is to continue branching out until Urban8 becomes a national brand. The next location Rose has in the works is in the Allen outlet mall.

“We were selling a dream before,” Green says. “Now, people are reaching out to us saying, ‘We want in the location,’ and we’re not even open yet.”
KEEP THE DALLAS OBSERVER FREE... Since we started the Dallas Observer, it has been defined as the free, independent voice of Dallas, and we'd like to keep it that way. With local media under siege, it's more important than ever for us to rally support behind funding our local journalism. You can help by participating in our "I Support" program, allowing us to keep offering readers access to our incisive coverage of local news, food and culture with no paywalls.
Make a one-time donation today for as little as $1.