With Classic Burgers and Pie Milkshakes, Scrumbscious Burgers & Pieshakes Is Worth the Drive 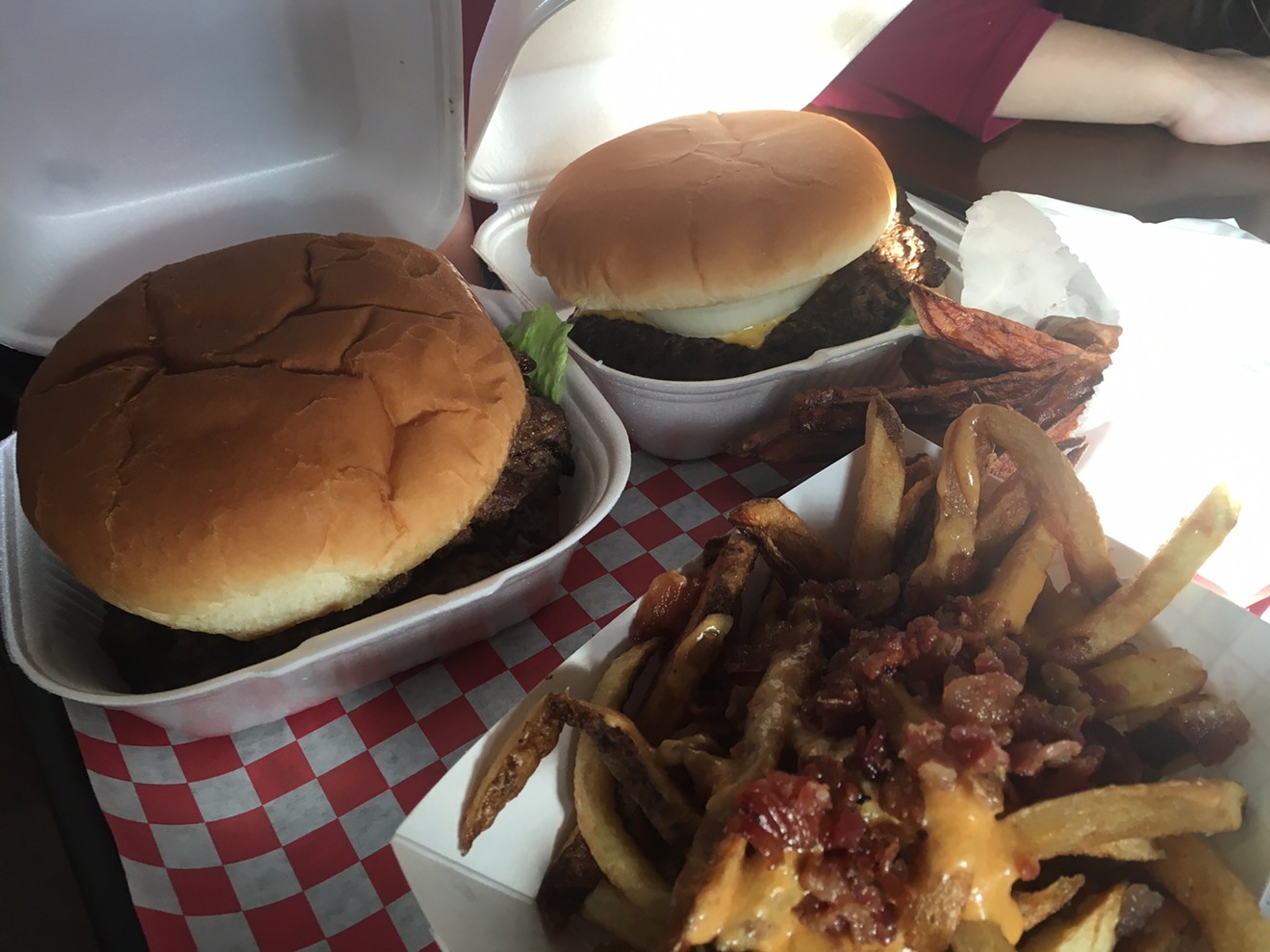 The burgers at Scrumbscious are simple and straightforward, no strange toppings or special plating — or even plates, for that matter — required. Tim Cox
Mesquite is not a diner’s paradise. For all the hungry Mesquite residents and anyone willing to suffer through Interstate 30 traffic, however, there is a place worth making the trip: Scrumbscious Burgers & Pieshakes.

Scrumbscious started in 2007 as a small, online-only business selling pies made out of the kitchen of founders Sherry and Chris Howard. Initially, the Howards were selling most of their pies to family and friends, but by Thanksgiving 2009, when they had more than 400 orders for the holiday, the family decided it was time to move into their own production space and rented a run-down location in Sunnyvale.

Soon after, Scrumbscious’ hidden weapon was developed. After the holiday, the family was left with 14 pies cluttering their home fridge. Between baking, selling and eating pies, the Howard’s were pied out, but Sherry had an idea. She put some vanilla ice cream in a blender, tossed in a slice of pie and blended up the family’s first Pieshake.

“Everybody loved the Pieshake,” Chris says of that first frozen indulgence. “The building we leased had a very small customer seating area and a drive-thru, so we decided to start making fresh-pressed burgers, french fries and Pieshakes. The rest is history. It was a huge hit. We outgrew that space in less than a year.”

Scrumbscious occupies an unassuming space on East Davis in Mesquite.
Tim Cox
Currently, Scrumbscious operates out of a dine-in/drive-thru space on East Davis in Mesquite where they offer classic burgers, Pieshakes and dozens of different pies out of the simple, stand-alone brick building that was basically ready to go when they moved in. “It even had plates, forks and spoons,” Howard says. “Since we had very little money, we were able to walk in for just the deposit and first month’s rent and start in a real restaurant space.”

This is the first restaurant concept for the couple, who share a love of cooking. Chris Howard grew up in the kitchen with his late father, who taught him how to cook. His father inspired the concept’s name.

“He used the word ‘scrumptious’ often to describe things that he had made,” Howard says. “It was just kind of his word to describe awesome food. So, in 2007 when we were looking for a website name, it was only natural to choose that word.”

Pie options from the dozens of possible varieties are listed daily on this chalkboard.
Tim Cox
When they found out scrumptious.com was taken, they switched it up, adding a play on the word “crumbs” in homage to pie crusts and Scrumbscious Pie Co. was born, later evolving into Scrumbscious Burgers & Pieshakes.

It’s only fitting that the name of the company is a tribute to family tradition, as the business itself operates as a family endeavor. The Howards have eight children ranging in age from 3 to 21 years old, the oldest five of whom either work in the restaurant or have in the past. Each day four or five members of the family — including Chris, Sherry and their progeny — can be found working the cash register, ovens, grills and blenders. The business keeps the family close but has its challenges.

“Well, the restaurant business is difficult and requires long hours, so the family is together a lot. That is both great and challenging,” Howard admits. “Everybody needs down time, and it is hard to come by in this business. There are a lot of sacrifices that my children have made along the way. While all of their friends are coming home after school to chill, play video games, do homework, my kids are coming to help at the restaurant. Naturally, they don’t always love that.”

The fruits of the family’s labors show in their food. The burgers are flat, wide as pancakes and cooked on a well-seasoned griddle. Come hungry if you go for the namesake burger, which boasts double meat and cheese, LTO and “scrumbscious sauce” — a ketchup-mayo concoction that, as a sign on the wall makes clear, has other ingredients that will not be disclosed. You can build your own burger with a generous menu of free add-ons like grilled onions, jalapeños and mushrooms, code-named “messy," “spicy” and “trippy” respectively — and a few that cost extra like “porky,” “Cali” and “birdie” (bacon, avocado, fried egg).

Aside from burgers, the rest of the menu is solid as well, from the hand-battered onions to the fresh-cut fries which can optionally be topped with bacon and house-made queso. Even the salads are better than you’d expect.

But the real star of the show here is the Pieshake, created by adding an entire piece of Scrumbscious pie to house-made vanilla ice cream and blending it into a cold, thick, liquefied pie. Chocolate shake enthusiasts will dig the chocolate cream Pieshake, whose rich, chocolate-pudding flavor blends with the ice cream to create a sweet far richer than the average chocolate shake. Other stand-outs are the banana cream Pieshake and the sweet potato Pieshake featuring a spicy kick courtesy of its ginger-snap crust.

No proper glassware for the Pieshakes; it's what's inside that counts.
Tim Cox
If you simply can’t bring yourself to drive to Mesquite, you can find the Pieshakes on your next trip to the State Fair of Texas as well. After three years of operating their restaurant, the family decided to increase their local exposure by bringing their drinkable desserts to Fair Park. The family ultimately hopes to open several more Dallas-area locations in the near future.

“We absolutely love what we do,” Howard says. “It has been the most gut-wrenching and personally sacrificial process we have ever gone through, but we love it."