The fair saw 49 entries this year, which were narrowed to 33 semifinalists (20 savory, 13 sweet). Ten of those will compete in the final round at 2 p.m. Sunday, Aug. 25. As for the experts doing the judging, we'll see people from the Dallas City Council horseshoe and leaders in local kitchens.

Our new mayor, former state Rep. Eric Johnson, is one, along with new councilman for District 7, Adam Bazaldua, who was also a former chef and DISD culinary teacher.

On the chefs side, food will also be judged by Samir Dhurandhar, corporate chef for Nick and Sam's Steakhouse; Chad Houser, founder, CEO and executive chef of Cafe Momentum; Kyle Noonan, founder and CEO of FreeRange Concepts (The Rustic, Bowl and Barrel); and Anastacia Quinones-Pittman, executive chef at Jose Restaurant.

TV personality and author LeeAnne Locken will also help in these important decisions. 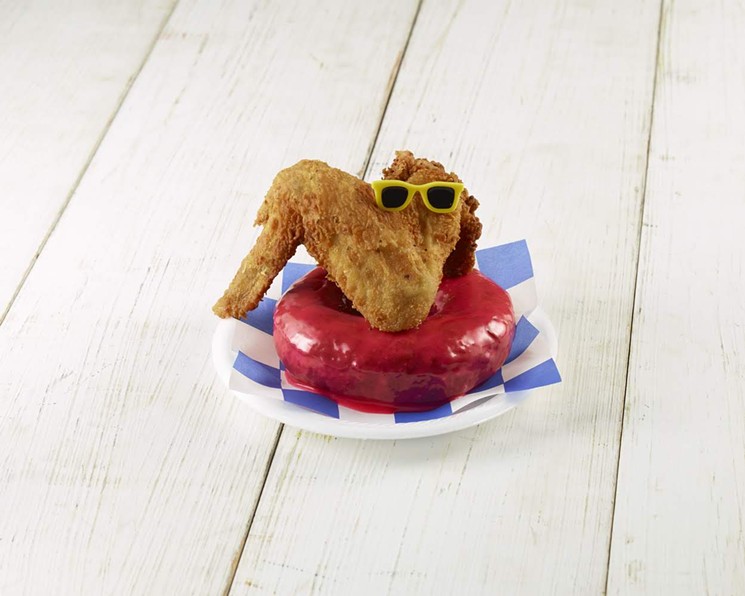 Big Red Chicken Bread: With a doughnut covered in some Big Red flavoring, there's no telling if this will taste great or not. But the chicken wing has sunglasses on it, and that's entertaining.
State Fair of Texas
The finalists were recently announced, and those attending Sunday's event will not only watch the judging go down; they'll be the first to sample these foods that are either creative or outrageous, depending on how you look at them.

Tickets are sold out for the event, where all proceeds will be donated to the Big Tex Scholarship Program.

Don't feel badly if you missed your chance to pay $125 to get in Sunday. A season pass seems relatively minimal at only $45 a pop.

The 2019 State Fair of Texas will run Sept. 27 through Oct. 20 at Fair Park.
KEEP THE DALLAS OBSERVER FREE... Since we started the Dallas Observer, it has been defined as the free, independent voice of Dallas, and we'd like to keep it that way. With local media under siege, it's more important than ever for us to rally support behind funding our local journalism. You can help by participating in our "I Support" program, allowing us to keep offering readers access to our incisive coverage of local news, food and culture with no paywalls.
Make a one-time donation today for as little as $1.