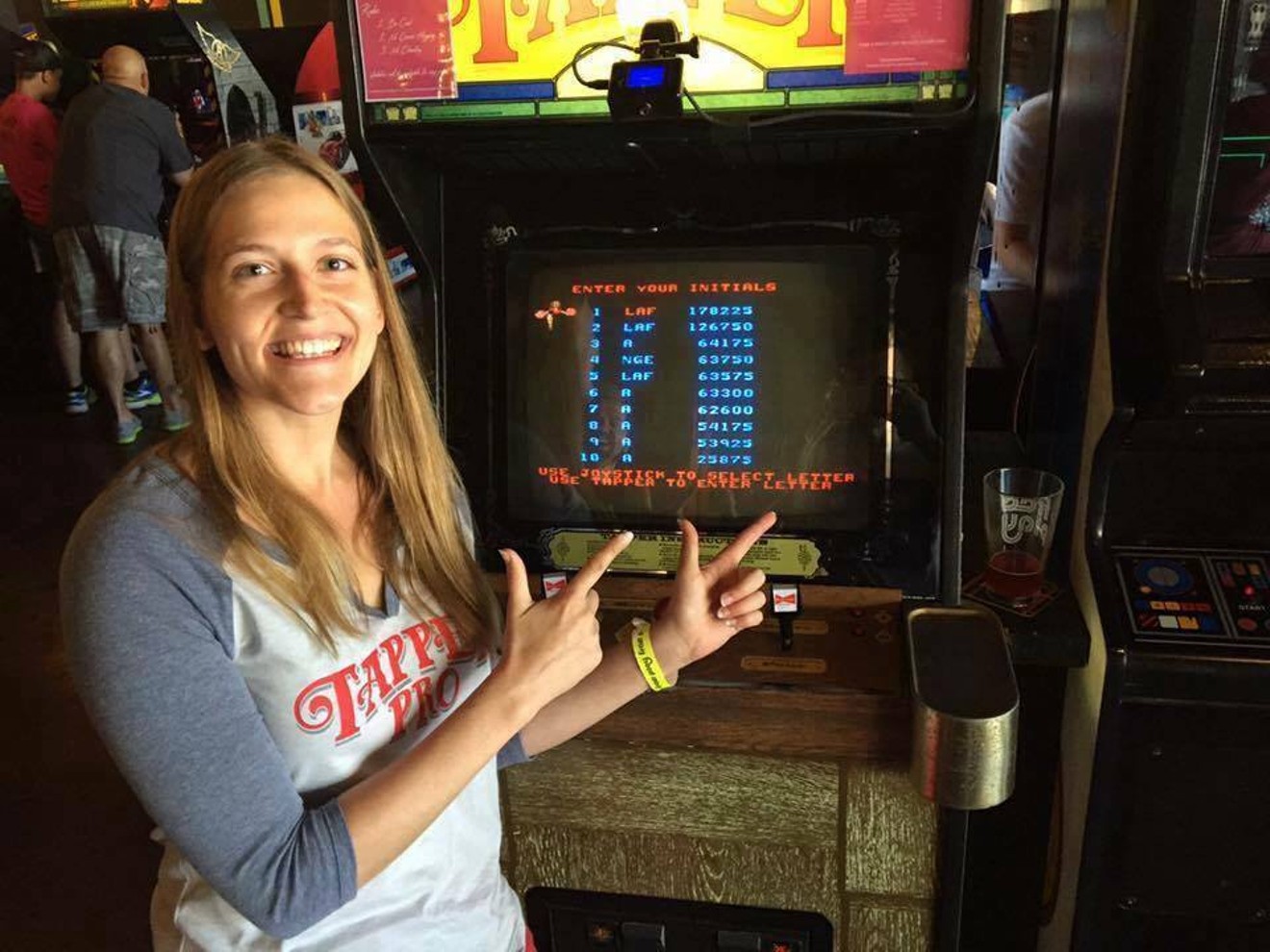 Lauren Featherstone, a yoga and fitness teacher from Plano, achieved a record-breaking high score for the video game Tapper at Free Play Arlington. Courtesy of Free Play Arcade
Most video game arcade champions spend their entire lives trying to master one machine. Lauren Featherstone isn't even old enough to remember arcades' heyday, yet she just smashed the world record for Tapper, one of the most beloved games of all.

Featherstone, 24, first played the beer-slinging arcade classic only two years ago. By day she works as a yoga instructor and is pursuing her pilot's license. She discovered the game during a trip to the Free Play arcade in Richardson. Until then, she had never played an arcade game of any kind.

"When I first went, I tried everything out because it was all new to me," Featherstone says. "There were a few games I associated with the Nintendo, like Mario Bros. and BurgerTime, but Tapper I hadn't seen at all."

Featherstone says she seemed to have a natural knack for Tapper, and since then, she's been practicing on Free Play's machines at the Richardson and Arlington locations in preparation for a world record attempt.


"Everyone was jumping up and down, screaming. I had 10 or 15 people call my phone just from watching the stream. It was really, really cool. People around the world were excited about it." – Free Play owner Corey Hyden

"After a while, it became one of those games that whenever I went to Free Play, I would always play it," she says.

The game seems simple. You control a bartender serving rounds of beer to customers by sliding the glasses along four long bars. The objective is to get them out the door before customers get upset and to prevent returning glasses from crashing to the floor.

Tapper is very challenging. Most people spend about a minute playing the game before they run out of lives, Featherstone says.

"The game never really lets up on you," she says. "You really have to be on your A-game all the time."

"Your eyes have to be everywhere at once, and you're having so many glasses thrown at you and you have to dish out so many that you can't memorize anything," she says. "With some games, there's a pattern, and you can memorize it and do it blindfolded. This one is random, so your reactions have to be super sharp."

Last weekend, Featherstone spent 24 hours playing the machine at the Free Play Arlington arcade, only stopping for bathroom breaks and the occasional snack in her first world record attempt. She didn't just beat the high score of 10,361,550 set in 2015, according to the Twin Galaxies video game record-keeping website; she destroyed it with a final score of 14,000,600 points.

Watch live video from FreePlayArcade on www.twitch.tv
Corey Hyden, the owner of the Free Play arcade chain, says Featherstone started her world record attempt at 4 p.m. Friday and gave herself just 24 hours to beat the record. The arcade had to do some careful planning to make sure she could have an unfettered attempt at the Tapper record.

The day before, the city of Arlington went through several brownouts that cut power to the arcade, so Hyden and his crew brought in backup batteries to run the arcade machine and all of the streaming equipment needed to document the record attempt, including a livestream on the website Twitch.

Hyden says they also weren't sure how the Tapper machine would react to a 24-hour marathon session. When Featherstone reached a new million-point mark, the game would react in different ways. Sometimes the screen would glitch; other times a level would restart.

Featherstone autographs the machine she used to beat the Tapper world record after her 24-hour gaming marathon.
Courtesy of Reddit
"We had all of these little issues to worry about," Hyden says, "so we had all of these plans in place in case anything went wrong."

Hyden says it took Featherstone around 18 hours to beat the world record. However, she pushed through to the 24-hour mark because so many people were cheering to keep going. Crowds watched her live at the Arlington location and on a screen at the Richardson location, and hundreds of people followed the attempt online.

"You could tell around that point that she was really tempted to call it a day because she'd been up for so long," Hyden says, "but she got a second wind and just pushed through it."

The place went wild when she finally stepped away from the machine just after 4 p.m. Saturday.

"Everyone was jumping up and down, screaming," Hyden says. "I had 10 or 15 people call my phone just from watching the stream. It was , really cool. People around the world were excited about it."

The moment picked traction the following morning when Featherstone's husband, Josh, shared a picture of her autographing the machine on the social media sharing site Reddit. The snapshot reached the front page of Reddit.

Feather says it felt "very surreal" when she finally stepped away from the machine as the world's best Tapper player. She was also in quite a bit of pain from sitting and playing the machine for so long.

"My shoulders were just screaming at me," she says.

She adds that she couldn't have done it without the support of the people cheering her on and her crew helping with things like "bringing me food, making sure the bathroom stalls were open and putting in '90s pop music for me."

"I had a really great crew because the hardest thing would have been the boredom and just quiet and tired the whole time," she says. "There was a fine line of them not wanting to distract me, but they also were making jokes and just putting some life into the place, so it doesn't drain you as quickly. They kind of made a little party out of it, which was fun. It's definitely the only way I would have liked to do it."