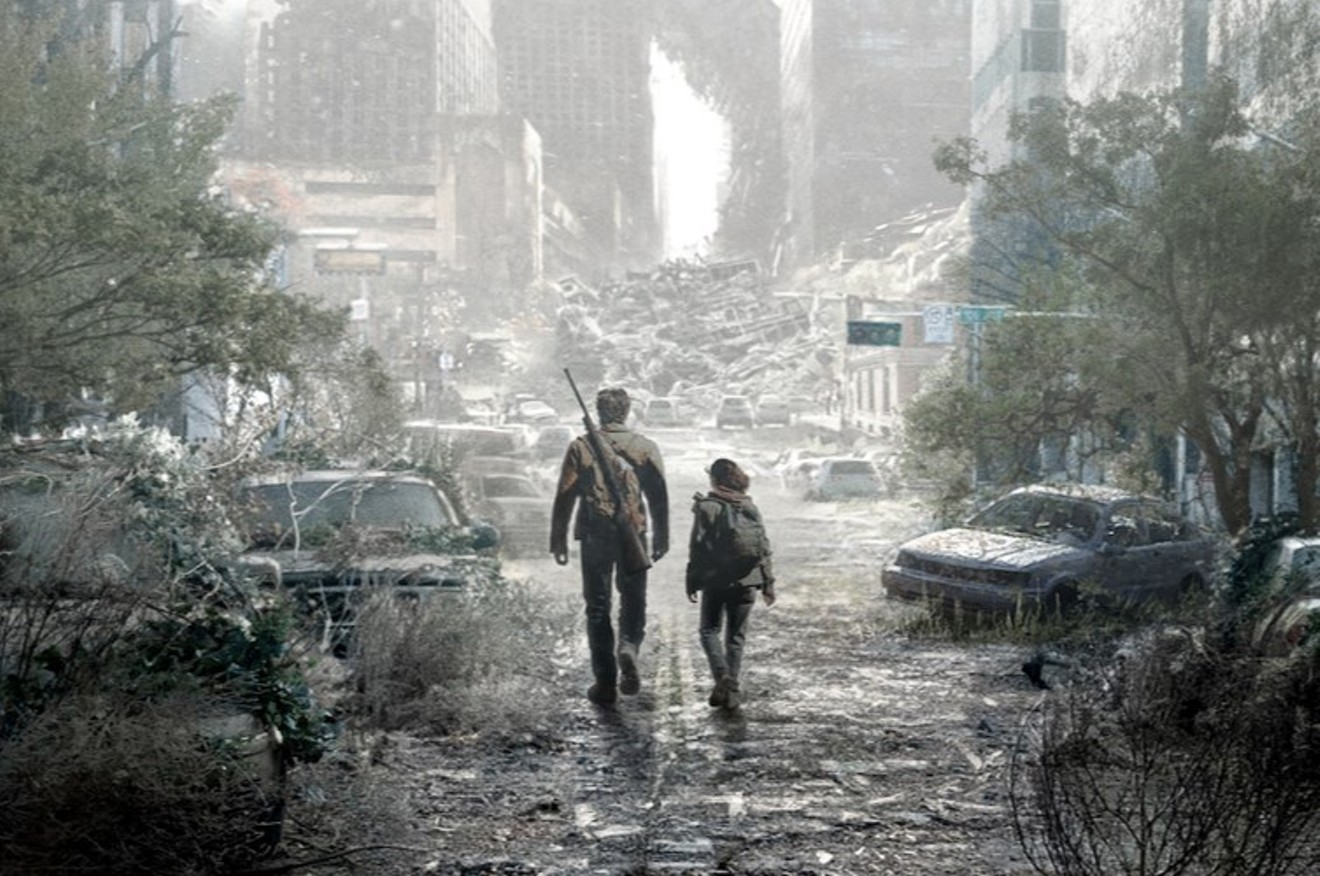 Pedro Pascal and Bella Ramsey star in HBO's adaptation of the apocalyptic, story-driven Sony video game The Last of Us. Courtesy of HBO
Video game characters have had a really hard time making the jump to other media. It all started when someone tried to turn Nintendo's flagship game Super Mario Bros. into a movie in 1993. The first Super Mario Bros. movie failed so spectacularly to capture the spirit of the game in a workable script that Nintendo has been afraid to make another movie since then. You know someone fucked up really bad when they can put the scare into a corporation that owns a chunk of your childhood.

Now we live in a world where games are often better at turning out stories and characters than most mainstream films and shows. Sony's The Last of Us, a bleak, dramatic, post-apocalyptic tale about a grieving father tasked with protecting a girl whose immunity may lead to the cure for a zombie-esque viral outbreak, could be the first successful attempt to bring a video game into a dramatic film or series. HBO premieres the new series based on the game on Sunday, Jan. 15.

The central figures are broken characters who have to depend on one another because they have nobody else, and the emotions from this bizarre relationship play out in believable, real and even moving ways. Honest to God, The Last of Us is the first game that made us cry and care about characters who are more than just pixelated cannon fodder.

If HBO's attempt to adapt a game into a series is as successful as the internet hopes it will be, it could lead to more heavy dramas based on game franchises. We humbly suggest the following as candidates.
1. Alan Wake
Remedy's popular psychological horror game is a brilliant concept that tackled a genre no one in the game industry was willing to even try.

The game's title character is a popular horror writer who travels to a small Northwestern town to get away from his struggles with the world's worst case of writer's block. A supernatural force kidnaps his wife, and the stories he writes seem to be infecting the world around him as a force he calls "The Darkness" tries to end him and wipe out the light.

Dark subjects are not new for video games, but Alan Wake was the first to take the concept of a psychological thriller and turn it into a third-person shooter. The town's inhabitants known as The Taken are enveloped by a possessive force, and Alan has to clean the darkness off them with flashlights and flares and blast his way through. It's tense, thrilling and challenging, and the right writer and director could do something amazing with a narrative form inspired by the game.
2. Control
If anyone suggests that Alan Wake should get the TV drama treatment, it's only fair that Remedy's other insane, sci-fi/horror adventure get the same shot.

Control is really hard to describe, and that fact alone makes it an intriguing narrative concept. The protagonist, Jesse Faden, lost her brother to some mysterious force that drives her to become the head of a U.S. agency called the Federal Bureau of Control. The FBC is in charge of investigating and keeping the fragile fabric of time and existence from ripping apart at the seams. The entire game takes place (or does it?) in the bureau's minimalist headquarters known as "The Oldest House," as a force called The Hiss launches a war on our plane of existence. Control's story weaves in so many inventive and surprising ways that no description can do it justice. You just have to jump in and let its ethereal surrealism take you somewhere you've never been.

Control would make for an addictive, dissectible series. It could explore Nietzsche-ian themes of human frailty and awareness with an adventurous, action-filled narrative. Imagine David Lynch's Twin Peaks if Agent Cooper wasn't afraid to rely on gunfire to solve problems and cases.
3. Max Payne
We know you're itching to scroll down to the comments section or jump on Facebook to the post sharing the link to this feature so you can announce, "Hollywood has already done a Max Payne movie, stupid!" First of all, enough with the name calling. It's cheap, easy and doesn't help you win any argument ... stupid.

Secondly, we know that Hollywood attempted and failed to turn Rockstar Games and 3D Realms' gritty, mob revenge tale into a workable film in 2008 with Mark Wahlberg. The big-screen movie didn't come close to recreating the great, dark, pulpy tale from the game of the same name starring a depressed, chain-smoking cop whose tragic personal loss fuels his reckless drive to bring down a drug-funded, New York mob family. That's exactly why it deserves a turn on the small screen.

Payne's story may sound like a bleaker time in front of a TV than a Black Mirror marathon, but the success of dramatic tragedies like Breaking Bad and Better Call Saul shows it could inspire a great, noir crime story with the style of a John Woo action film, if it's in the right hands. Do we even need to point out the perfect coincidence that Vince Gilligan just finished another great run with Better Call Saul's perfect final season and needs another project to take to TV? We couldn't drop a bigger hint if we tied it to a safe and threw it on your head.
4. BioShock
This underwater, first-person shooter had a lot to say about monarchies, unchecked aggression and the madness that ensues when all a person cares about is how much power they can shore up for themselves.

This 2K Games title takes place in an underwater utopia known as Rapture run by a megalomaniacal business magnate named Andrew Ryan. He discovers a substance known as ADAM that transforms human DNA into a powerful weapon using plasmids to give people the ability to throw fire, summon swarms of stinging insects and even hack electronic systems. Ryan refuses to play nice with the rest of society and builds his own underwater city where protagonist Jack finds himself following a shipwreck. As the city decays and its citizens brutalize each other for whatever ADAM they can scrounge from possessed girls known as Little Sisters (who are guarded by hulking diver monsters called Big Daddies), Jack is tasked with saving the girls while also giving players opportunities to just be selfish even at the risk of human sacrifice.

A TV version of BioShock could have a lot of fun playing out a cautionary tale of unchecked power and the dangers of human aggression in an episodic format. Imagine a story written by Ayn Rand with more self-awareness and less Drake-esque levels of "Fuck you, I got my own" in the characters, and you've got the makings of a great show.
5. Maniac Mansion
Lucasarts Games released one of the first popular point-and-click adventure stories in the 1980s on the Commodore 64 and Apple II with this comic horror tale about a group of stereotypical teenagers rescuing a friend kidnapped by a crazed scientist and his oddball family.

Maniac Mansion did get a TV adaptation in the '90s with SCTV alum Joe Flaherty in the title role, but it played more like a family-friendly sitcom that shared only a name with the game's crazed family. That's why it should get a second shot as a tongue-in-cheek drama.

The original Maniac Mansion is a puzzle game at its core, but it's also fraught with peril and has a wicked sense of humor. A more dramatic version that retains the game's signature elements and sense of fun could also turn an epic rescue tale into an episodic adventure the way that Netflix's Wednesday did with The Addams Family.
KEEP THE DALLAS OBSERVER FREE... Since we started the Dallas Observer, it has been defined as the free, independent voice of Dallas, and we'd like to keep it that way. With local media under siege, it's more important than ever for us to rally support behind funding our local journalism. You can help by participating in our "I Support" program, allowing us to keep offering readers access to our incisive coverage of local news, food and culture with no paywalls.
Make a one-time donation today for as little as $1.