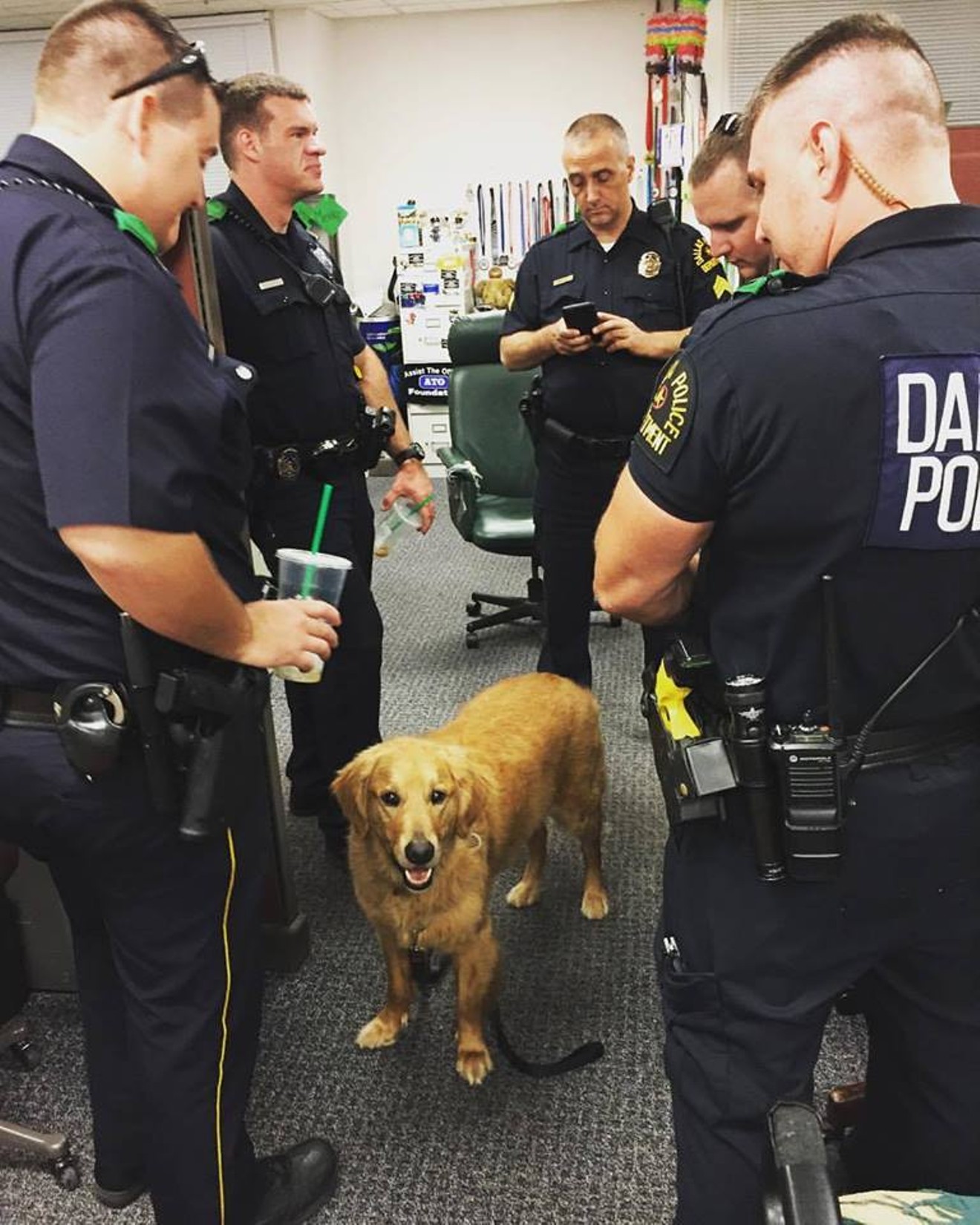 Brisbane is one of 11 therapy dogs who have been coming to the aid of police officers across DFW. Brisy's Bowties

Like many others in Dallas and across the nation, Allison Russell found herself glued to the news on the evening of July 7, 2016. Shots were fired during a protest in downtown Dallas, and her husband Dan Russell was among hundreds of cops on the scene where four Dallas Police Department officers and one DART officer were killed. Dan made it home but, like many other officers, he didn’t get to stay for long.

“It was the most scared I had ever been in my entire life; he didn’t get home until Friday morning, but on Friday night, he had to go back to work again,” Allison says. “I didn’t want to be alone. I was very scared and I didn’t know what to do. I was at a loss.”

Allison wasn’t entirely alone, however. She had Brisbane — Brisy, for short — a then 4-year-old golden retriever. She says she had always intended to get her dog certified as a therapy dog, inspired by the use of therapy dogs after the Sandy Hook Elementary shooting in 2012. Originally she says she imagined Brisy working with children considering his affinity for them, though training had to be put on hold shortly after it began. But on July 8, alone in her apartment, with Brisbane by her side, Allison decided to do something.

“He wasn’t certified… but I just looked at him and I thought, ‘We’re going to the police department,’ and we did,” she says. “That was the moment I knew that he would have a positive impact on the policing world with regard to his work as a therapy dog.”

After finally being certified January 2018, Allison says she’d regularly take Brisbane to her husband’s station to practice his skills socializing. They were a regular-enough sight that it didn’t take long for Brisbane’s services to be tragically necessary, but thankfully available, after the death of Dallas police officer Rogelio Santander.

“When the officer was killed in April, I had my dog there and the sergeant asked if there were any way I could get more dogs, so I reached out to Heather [Gillihan] and her connections at the Zoom Room,” Allison says.

Gillihan is the owner of the Zoom Room in Trophy Club, the training facility where Brisbane and dozens more therapy dogs have been certified.

“We saw a niche and decided to form a team and see if we can do something permanent to help out at the police station," Allison says.

With Gillihan’s support, Allison has coordinated a group of 11 other therapy dogs and handlers that she calls Brisy’s Bowties. The group launched a pilot program at the police sub-station Dan is stationed at over the summer, which provided onsite therapy dogs for police officers two Saturdays a month from June through August. Allison says the response was overwhelmingly positive, and DPD has shown interest in implementing the program on a permanent basis. 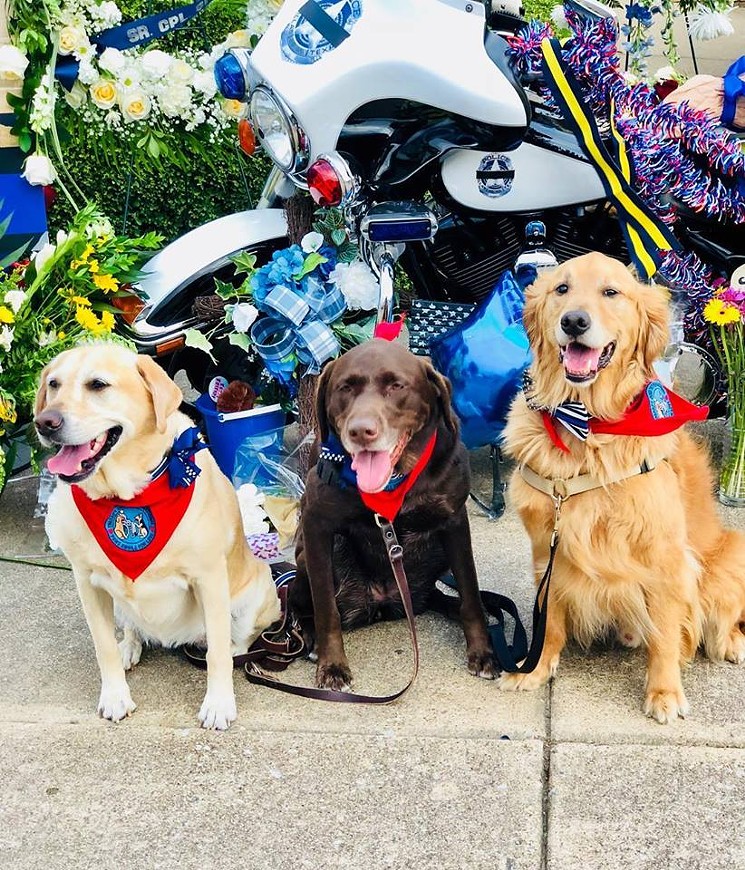 “I see it as an opportunity for us to help bridge the gap between the community and the officers,” she says. “I feel very, very strongly, and I tell everybody, that I firmly believe that if an officer can start their shift and leave the station with a positive attitude and a good head space, then that’s going to trickle down to their next interaction.”

Therapy dogs have been implemented by more and more police stations since the second such compassionate canine was deputized in 2013. The Lubbock Police Department brought on a Bernedoodle puppy named Justice to pull double duty as a resource for police officers and community engagement back in March. And Brisy’s Bowties, a completely free service provided by volunteers, has found even more applications for their group since the end of this summer’s pilot program, sending dogs and handlers to hospitals, candlelight vigils and wherever else they’re needed.

“We’ve just been responding when events come up,” Allison says. “We have a Facebook page and I just share information as regularly as I can whenever I get it and people, if they’re available they volunteer or if they’re interested they step up. Right now we’re just kind of taking things as they come until we can get back on our regular schedule of having therapy dogs at the [police station].”

For more information on therapy dog training or Brisy's Bowties, you can call the Zoom Room at (817) 360-8606 or visit Brisbane's Facebook.
KEEP THE DALLAS OBSERVER FREE... Since we started the Dallas Observer, it has been defined as the free, independent voice of Dallas, and we'd like to keep it that way. With local media under siege, it's more important than ever for us to rally support behind funding our local journalism. You can help by participating in our "I Support" program, allowing us to keep offering readers access to our incisive coverage of local news, food and culture with no paywalls.
Make a one-time donation today for as little as $1.