After Being Robbed at Gunpoint, Chelsah' Lyons Decides To Defend Herself 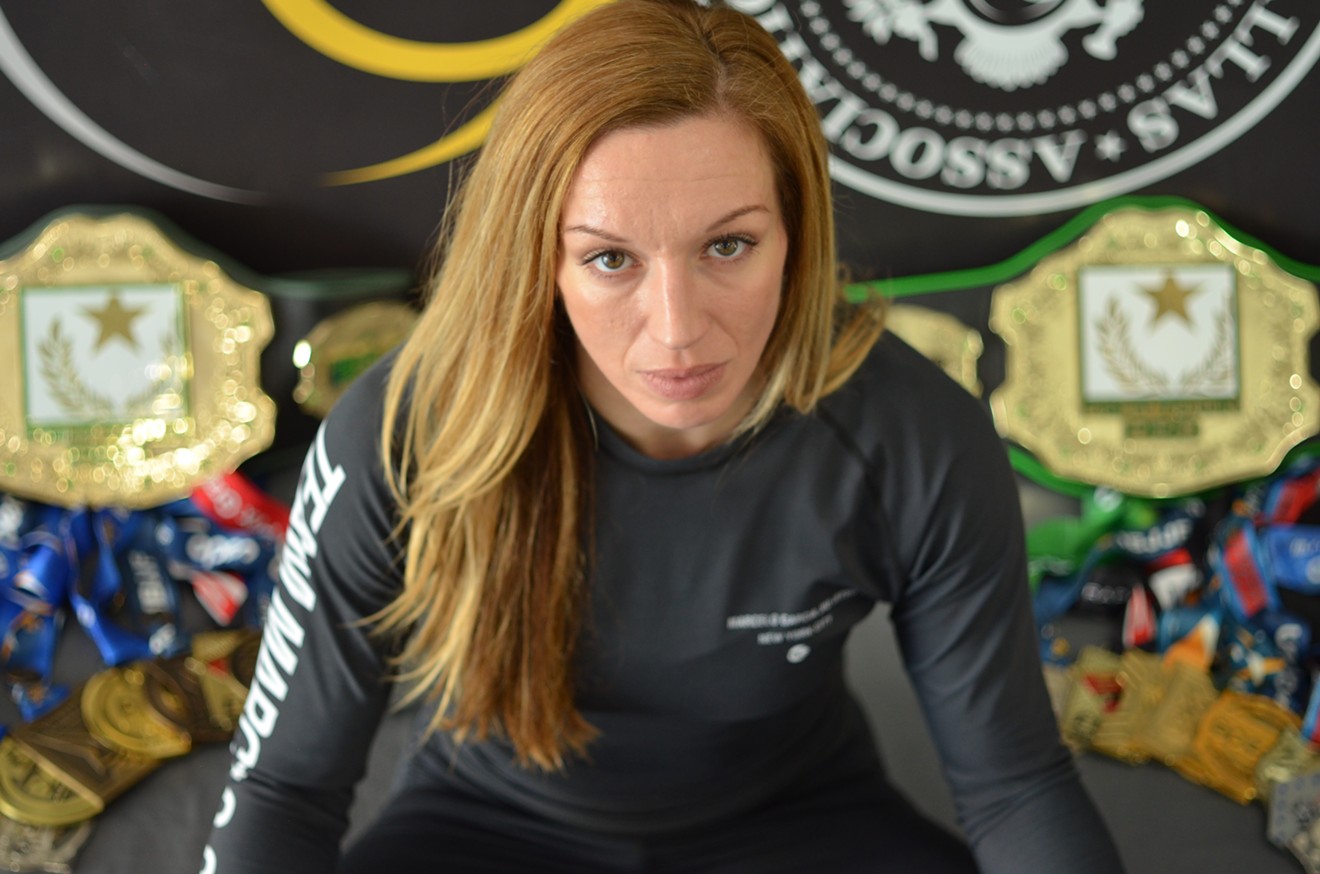 Chelsah' Lyons is now a black belt. Jacob Vaughn
With summer in full swing, the blistering heat continues to come down even onto the sidewalks shaded by tall buildings, like Marcelo Garcia Jiu-Jitsu of Dallas, a martial arts studio. One might think taking a step indoors is the best escape from the dehydrating air that engulfs this sweaty season. Practitioners at Marcelo’s know this is not always true.

At Marcelo’s gym, there is no air conditioning, only fans. A handful are installed on the white-tiled ceiling. Another sits on the floor in front of the entrance. Big, orange and dusty, it attempts to create a breeze throughout the studio.

Chelsah' Lyons, an instructor and world champion Brazilian jiujitsu practitioner, is used to it. She and other longtime students at Marcelo’s have felt worse. When she started attending classes at Marcelo’s, there was an even smaller fan stirring up the air in the studio. It took the help of nearly the entire gym to buy the one there today.

“We just had a box on the desk," Lyons recalls. "Every day, people would put just as much money as they could in there until we all had enough money to buy that fan."

Lyons’ contributions to the gym far surpass pitching in $5 here and there to help buy a new fan. Rob Ables, owner of the gym, says Lyons is the kind of person who leads by inspiration. People see her, he says, and want to emulate her behavior. At one point, however, Lyons was just as inexperienced and new to the art as some of her students.


It began in 2010 at a dry cleaner where Lyons worked. She found a flyer for a local mixed martial arts gym. She had always told herself she wanted to get into martial arts.

One day, while walking up to her apartment, she was robbed at gunpoint. From that moment, she decided to stop talking about the things she wanted to do and just do them. She wanted to know that if something happened, she would know how to defend herself.

She walked into a mixed martial arts gym thinking she wanted to train in muay thai and later become a cage fighter. She ended up dabbling in judo and jiujitsu as well. A couple of months in, she decided she needed to have an understanding of how to handle herself on the ground. This brought her to Star Jiu-Jitsu, a martial arts gym in Carrollton.

“As much as I loved these varying martial arts, I feel like jiujitsu kind of just swept in and was like, ‘Follow me,’” Lyons says. “I just kind of never looked back.”

Her love for the art eventually led her to compete in her first local tournament. There were no other female competitors, so she competed against the men. She was only a white belt at the time.

She faced off with a blue belt and later a purple belt and came in second. As fate would have it, one of the guys she beat was a student of Rob Ables at Marcelo’s.

A friend of Ables' from Star called him one day to let him know Lyons would be training at his place. She brought an amazing amount of energy and willingness to train, he says, regardless of who she was training with. Ables told everyone to treat her as an opponent, not a woman. If they decided not to listen, they would quickly find out why, he says.

“She’s a very strong woman," Ables says. "You have to accept that she’s equal across the board. If you don’t want to accept that, she’ll beat that into you.”

When Lyons started training at a new gym, after she competed in another local competition, she became aware of the world championship the International Brazilian Jiu-Jitsu Federation hosted.

She says she was only brave enough to compete in this competition because she did not know much about it. She went in and won, she says. In her mind, she considers this to be her first real competition. The feeling was so different compared to her previous tournaments, she says.

“Because of where I was years before this, to becoming a world champion, I was like, ‘This is what I’m meant to do. I can be somebody in my eyes,’” Lyons says.

She began talking to her coach, Ables, more in the run-up to the Pan-American Championship, another IBJJF tournament, and he led the way for her, she says. The biggest change in her understanding of competing came with the first tournament where Ables was by her side.

“He let me know if you keep holding people above you, they’re going to stay there,” she says. “I just believed in myself even more as a competitor [and] as somebody who could become an instructor.”

One day, Ables told Lyons he wanted her to start teaching his children's class. The role has become important to Lyons. Even in just a five-minute interaction with a child, she feels she is molding his or her world.

“I think we have a huge responsibility with people, but especially kids, in teaching them this,” she says. “I would like to be that instructor that they feel like they can come talk to and ask me anything.”


“I think we have a huge responsibility with people, but especially kids, in teaching them this. I would like to be that instructor that they feel like they can come talk to and ask me anything." – Chelsah' Lyons

Lyons has conflicting feelings about her most recent competition. During the last IBJJF world championship, she says she performed better than ever. She came out on top during her first bout. However, her second was more of a battle. Near the end, she got caught in an armbar and had to tap.

Ables says watching Lyons grow and being there to support her has been one of the best parts about owning his gym. They have a brother-sister relationship, he says.

“I’ll use the most absurd things for a lesson just because I’m pissed off," Ables says. "She couldn’t park a car one time, and I was like, ‘If you can’t fuckin’ parallel park, how are you ever gonna be a black belt or a world champion?'"

Until recently, Lyons had been a brown belt for about a year and a half. There have been times when she could have easily had her black belt, Ables says. Other times, he questioned how she ever got her brown belt.

“I’ve been holding [her black belt] and thinking of all these things that I want her to be, and then I realized, she already is what she needs to be. It’s not just about the goals that I have,” Ables says.

At the end of Lyons' class June 27, after more than eight years of training, Ables surprised her with her black belt. She did not know how to react. She did not even have time to cry, she says. At times, she questioned if she would ever get it.

After she tied her new belt tightly around her waist, the two hugged it out, and as a right of passage, each black belt in the studio took turns throwing Lyons down to the mat.

“It’s just a beginning,” Lyons says. “We just got to the starting line.”
KEEP THE DALLAS OBSERVER FREE... Since we started the Dallas Observer, it has been defined as the free, independent voice of Dallas, and we'd like to keep it that way. With local media under siege, it's more important than ever for us to rally support behind funding our local journalism. You can help by participating in our "I Support" program, allowing us to keep offering readers access to our incisive coverage of local news, food and culture with no paywalls.
Make a one-time donation today for as little as $1.