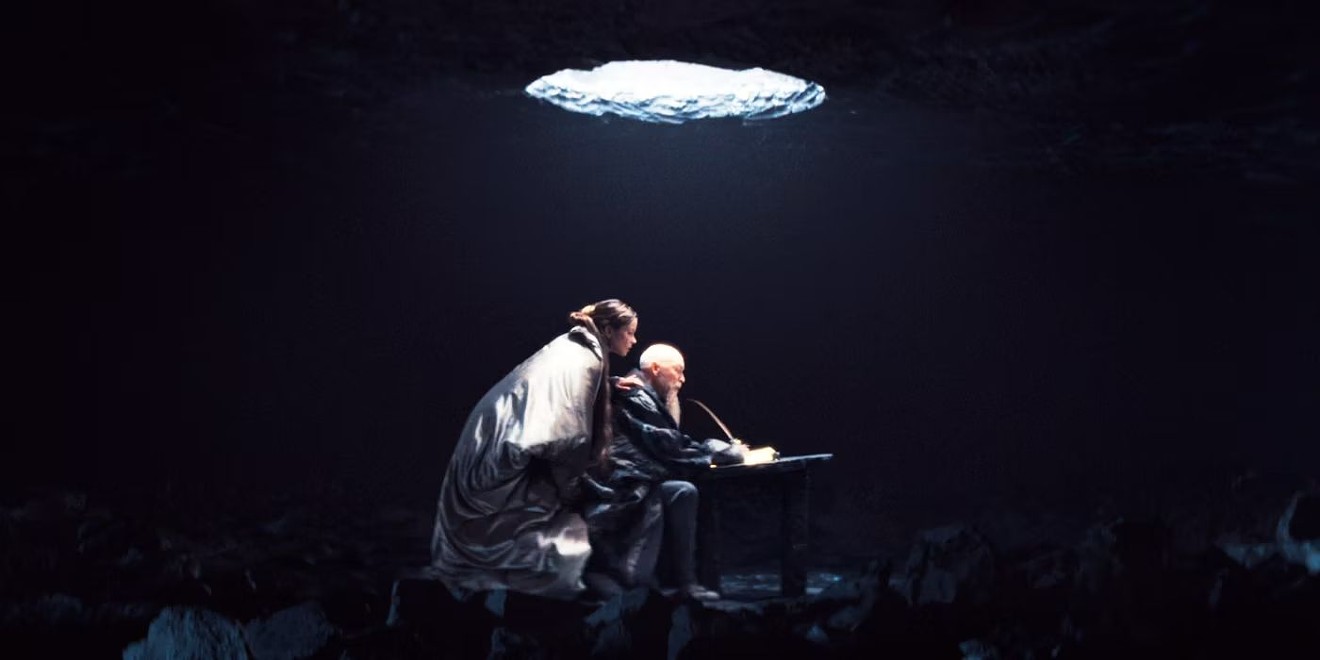 Sylvia Hoeks and Jackie Earle Haley star in David Lowery's short film The Oak Thorn and The Old Rose of Love. Courtesy of A24
Director David Lowery's epic adventure The Green Knight may have been snubbed by last year's Oscars, but it became one of the most discussed and lauded films of the 2021 movie season.

It also fulfilled a lifelong dream for Lowery, who grew up reading the adventures of King Arthur and his knights.

"There's more about them to discover," Lowery says. "I always find there's far more to unpack than I expected. I grew up loving King Arthur stories all through my childhood and into high school. I love those stories. I love tales of knights going on quests, and most of the ones I learned were centered around King Arthur, and by re-reading them, there's all sorts of elements about our history, religion, ethics and morality that I wasn't clocking as a child."

Since Lowery is one of those filmmakers who always has a project in the works, he immediately jumped into his adaptation of Peter Pan and Wendy for Disney following the completion of The Green Knight. But he couldn't resist dipping his toes into the mythical medieval realm just one more time.

The Oak Thorn and the Old Rose of Love is a short film Lowrey shot at MPS Studios in Dallas. It's loosely related to the events of The Green Knight in that both take place in the same literary universe but they're unconnected chronologically. The 20-minute film will be released on a special Blu-Ray edition of The Green Knight coming out on Nov. 25.

"It's connected in that it's based on another story from the canon of Arthurian lore," Lowery says. "While I was researching The Green Knight and all of the legends surrounding that particular story, I came upon so many others, and this one I really liked. When I had the opportunity to make a short film set in the same world, this is the one that came to mind."

Lowery says he also jumped at the chance to work with the short film's principal cast including Jackie Earle Haley, who played Freddy Krueger in 2010's A Nightmare on Elm Street and Rorschach in Zack Snyder's Watchmen, and Sylvia Hoeks, who played the cold and relentless Nexus-9 replicant Luv in Blade Runner 2049.

"I've been a fan of both of these actors for a long time, and we put the movie together very quickly," Lowery says. "There's a very short list of people who I thought would be right for it." Dev Patel plays Sir Gawain, the headstrong nephew of King Arthur, in director David Lowery's epic redemptive adventure The Green Knight.
Eric Zachanowich / A24 Films
The 20-minute film took three months to create, with only three days of shooting on the MPS Studios lot in Dallas. Lowery says the short focuses more on the dialogue between these two characters than on the action surrounding them.

There's not much that can be revealed without giving away the short central story. However, it's jam-packed with Lowery's signature touch for capturing symbolism in delicate scenes of quiet beauty, relating the kind of Arthurian mythical story that actually speaks more to the present than anyone might realize.

"You just don't think about the world being so similar in the 14th century as it is now and it's remarkable how the same issues and same dynamics were at play then that we see in the narratives around us in the present day," Lowery says. "Looking at these stories now in 2022 with an understanding of British imperialism even as I knew it as a child and the way Western culture has spread across the globe is way different from the way we perceive it. I grew up without understanding what colonialism was and as an adult, I do understand it and look at it with different perspectives from the way others did before me."
KEEP THE DALLAS OBSERVER FREE... Since we started the Dallas Observer, it has been defined as the free, independent voice of Dallas, and we'd like to keep it that way. With local media under siege, it's more important than ever for us to rally support behind funding our local journalism. You can help by participating in our "I Support" program, allowing us to keep offering readers access to our incisive coverage of local news, food and culture with no paywalls.
Make a one-time donation today for as little as $1.