There was a time when people actually had to put on pants, go outside and drive to a place to find a movie to take home. Watching movies on VHS (video home system) tapes from Blockbuster Video or the local video rental hut presented more than just a movie viewing experience: They presented a challenge.

And some people just like things the hard way, which is why a group of videotape collectors and movie buffs from across North Texas come together for video swap meets.

"It feels like a big commitment when you put in the tape and play it because you can't skip forward," says Eli Luna, founder of the Dallas VHS Swap. "You can't skip back. You're committed to watching it all the way through regardless of how good or bad it is."

Sadly, this adventurous quest is almost gone thanks to the rise of streaming platforms that provide a selection as big as a movie warehouse.

But there is a way for people who remember going to video stores — and those who've never seen the bright blue and yellow glow of a Blockbuster Video sign — to experience the movie rental experience with a new exhibition that opened Saturday at the Texas Theatre.

A panoramic view of The Video Crypt, opening on Saturday in the Texas Theatre's Safe Room gallery.
Danny Gallagher
The Video Crypt is a re-creation of '80s and '90s video rental stores, on display in the Oak Cliff cinema's Safe Room gallery. It has aisles stocked with VHS tapes categorized by genre, promotional standees made of cardboard, advertising new home releases of George Romero's The Dark Half and Hulk Hogan's Mr. Nanny and analog TVs playing some of the rarest items on the shelves. There's even an adults-only section with original copies of Deep Throat and Debbie Does Dallas behind the same type of beaded curtain that parents somehow believed would stop hormonal teenagers from finding a world of perverse delicacies.

The Video Crypt is the creation of two Texas Theatre employees, Vianca Vega and Chad Pierce, who have shelves full of rare and favorite VHS tapes that they wanted to share.

"We're constantly daydreaming about what we can do, and one of the things we were constantly discussing is a video store," Pierce says. "I was even seeking out locations that I found were pretty reasonable and thought maybe I could do it with a business grant." 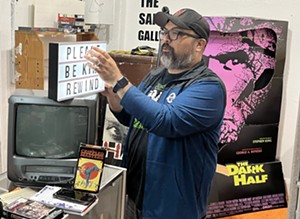 Eli Luna, founder of the Dallas VHS Swap, sets up the classic rewind reminder sign at the front desk of The Video Crypt at the Texas Theatre.
Danny Gallagher
The Video Crypt won't actually rent out the tapes in the main floor. The only thing that comes close to merchandising are the T-shirts and buttons with the store's logos and the racks of clearance tapes on the back wall — next to a promotional poster of a ticket taker at a movie theater marveling at copies of Star Trek IV and Crocodile Dundee for $29.95.

Dallas also has a big community of tape collectors thanks to events and groups such as the Dallas VHS Swap and Facebook groups like the Dallas Film Cult. Vega says the attraction is more about recreating the long, lost feeling of going to a rental store and comparing the ways the viewing experience has changed in our digital age of push-button convenience.

"I just remember the feeling of whenever I was a kid and I would go to Blockbuster or Hollywood Video and I don't even have to say those," Vega says. "I would go to the video stores that were connected to where you'd go and get gas, and I remember constantly seeing the videos that I wasn't allowed to rent. I remember seeing the case for Dead Alive before I even knew what it was about."

The month-long video store exhibition will also hold this month's Dallas VHS Swap outside of The Video Crypt's doors on Sunday. Gen Zers, familiar with the concept thanks to Stranger Things, will now have the pleasure of browsing for movies and discovering over and over that the store is out of copies of what they're looking for. But, hey, at least we knew what we wanted.

"Even now on Netflix, you can browse for an hour and never decide what you want, whereas with VHS, you can look at a badass cover and you're just going to go with it and it may not actually be good but it doesn't matter," says Eli. "It's about the commitment to what you've spent your Friday and Saturday night selecting and going home with."

VHS may be an outdated form of tangible media, but Pierce says VHS tapes lasted so long and are still collected because they could hold more content and cost less than Betamax tapes, the precursors to VHS.

Chad Pierce, left, and Texas Theatre founder Barak Epstein organize tapes in the horror section of The Video Crypt.
Danny Gallagher
KEEP THE DALLAS OBSERVER FREE... Since we started the Dallas Observer, it has been defined as the free, independent voice of Dallas, and we'd like to keep it that way. With local media under siege, it's more important than ever for us to rally support behind funding our local journalism. You can help by participating in our "I Support" program, allowing us to keep offering readers access to our incisive coverage of local news, food and culture with no paywalls.
Make a one-time donation today for as little as $1.