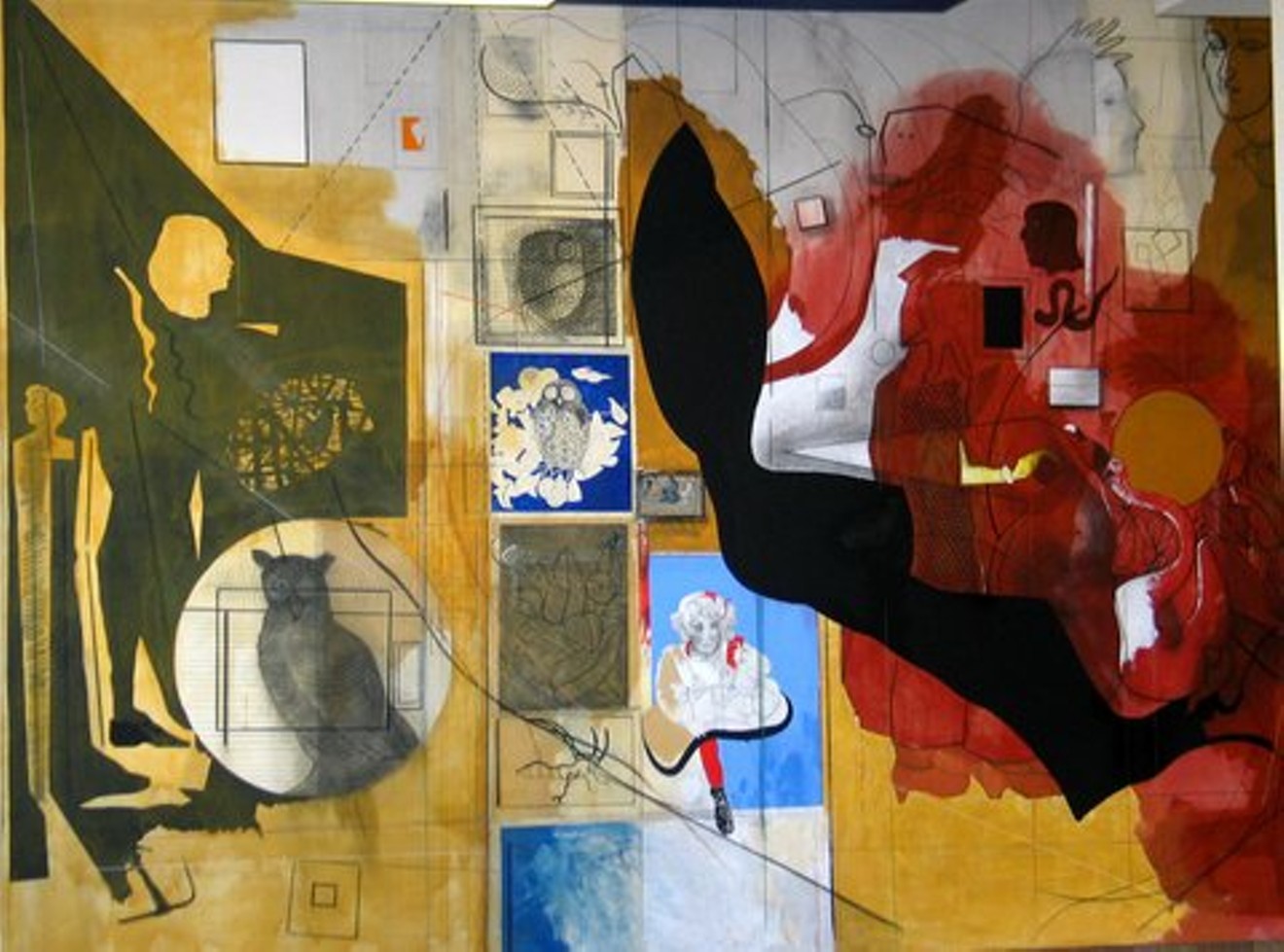 Jorge Castillo's "Broadway" is one of the pieces at the Jesuit Dallas Museum. courtesy Jesuit Dallas Museum
It’s a breezy and sunny Friday in March, the last day of school before spring break, and boys in jackets and ties are quietly studying in the library when the bell rings. A noisy throng races through the foyer, where a marble and steel crucifix hangs alongside a painting of the Virgin Mary. The nameplate nearby identifies them as works by Salvador Dalí that Stanley Marcus donated to the school.

Jesuit College Preparatory School is the home of the Jesuit Dallas Museum. Works are displayed in the hallways, library, classrooms, courtyards and offices of the school. Museum director Elizabeth Blanc insists that the art is safe. There has been no damage caused by this high-energy, all-male student body.

Originally located at Blackburn and Oak Lawn, Jesuit College Preparatory moved to its current location in 1965. The Jesuit fathers said their most important consideration was that the address be 12345, so the school relocated to 12345 Inwood Road. The Catholic private school educates approximately 1,100 students on its 34-acre campus in North Dallas.

The Jesuit Dallas Museum is a separate nonprofit institution. It began in 1986 after alumnus Frank Ribelin (class of 1950) donated a collection of mostly Native American art, creating the inaugural collection. Since then, the museum has grown through subsequent gifts or pieces acquired through targeted fundraising efforts. The latest acquisition is the four-piece print "American Dream #2" by pop artist Robert Indiana.

Blanc says the museum has "an art collection with religious pieces," including "an extensive Native American collection, a Mexican and Texan collection, as well as pieces from five continents and 25 countries spanning years of art and culture."

Everywhere you look in the school, there is art — paintings by artists such as Diego Rivera, Georges Braque, Robert Rauschenberg, Claes Oldenburg, Dale Chihuly and Ansel Adams; a bronze sculpture by Glenda Goodacre, designer of the women’s museum in Washington, D.C.; R.C. Gorman’s Navajo Code Talker bust; a large kinetic piece by Israeli artist Yaacov Agam that stretches the length of a stairway; and Mayan and Peruvian ceramics from the first century.

In addition to the 10 or so tours designed for students and related to subjects or courses of study, the museum hosts three special exhibitions each year that are open to public upon request. In 2015, the museum presented Ground Zero with works by various artists, some using nails and steel from the World Trade Center site. On display now is a Lewis and Clark exhibit featuring works from the museum’s collection and photos by landscape and wildlife photographer David Ranney. Beginning March 23, the geometric paintings of Jesuit graduate David Collins will be featured.