Tony Barbieri (left) plays his Jake Byrd character to stir up some trouble with Flat Earth International Conference director John Gabrielson (center) and conference founder Robbie Davidson (right) on Thursday at the Frisco Convention Center. Danny Gallagher
Being in a conference dedicated to the belief that the Earth is flat is surreal enough. Then one of late-night TV's most notorious trolls enters to stir up trouble for the sake of comedy, and it somehow feels more surreal but a hell of a lot funnier.

Jake Byrd, the chipper, conspiracy-loving supporter of everything crazy and wrong in this world, played by Jimmy Kimmel Live! comedy writer Tony Barbieri, showed up at the Flat Earth International Conference last Thursday at the Frisco Convention Center with a camera crew presumably to film another segment for the ABC late-night show.

We spotted Byrd standing outside the entrance to the conference's main stage in the northern hallway of the convention center. The bearded, beaming botherer sported a brown trucker hat with "Level Headed" printed over the brim and a blue T-shirt reading "Flat Outta Hell" over the proposed image of a flat planet Earth. Byrd also walked around the convention floor in the white dress shirt that he always wears underneath his ever-changing cycle of protest T-shirts, a tightly strapped backpack and a pair of khaki pants.

He also got around on a thigh-mounted knee crutch with the bottom half of his left leg in a cast. The cast and crutch aren't a usual part of his TV MO. It appears he recently had some kind of surgery, according to a post on his Twitter page.

Byrd had some problems getting his credentials approved as he tried to enter the main hall during one of the main speakers' presentations. He got into an increasingly loud argument with conference director John Gabrielson of Austin, who asked Byrd to confirm his identity. Eventually, Byrd started yelling that he was exposing Gabrielson's status as a shadowy member of some kind of oppressive force as their voices grew louder and attracted a small crowd.

"Long story short, I had some people come up who thought he might have infiltrated the conference with bad credentials," Gabrielson says. "So I just asked him to step outside and said, 'Hey, I just need to see your ID,' and he was giving me a hard time. I told him I just need to verify your badge." 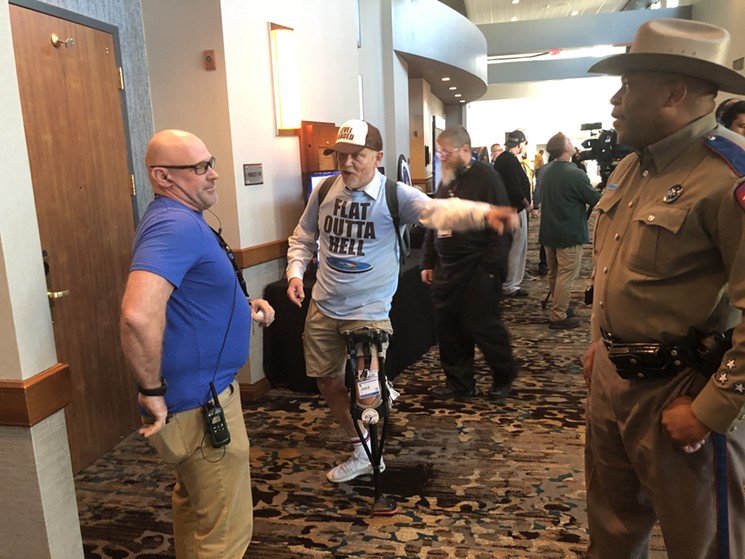 A state trooper steps in to keep an eye on a small conflagration between Flat Earth International Conference director John Gabrielson and Tony Barbieri, aka Jake Byrd.
Danny Gallagher

Eventually, Gabrielson was able to electronically confirm that Byrd (or Barbieri or whatever plane of existence the two were on at the time) had the proper credentials to attend the conference. Flat Earth International Conference founder Robbie Davidson says he knew that Kimmel's show had requested admission to the conference but did not know who would show up or be using them.

Gabrielson also asked Byrd for some form of ID. Byrd fished into his pocket for a wallet, pulling out a beat-up, leathery billfold and produced everything but a state issued ID such as a video rental membership card.

A state trooper who was on duty as part of the conference's security came over to keep an eye on the situation. During one point, Byrd and the officer share a fist-bump while Gabrielson tried to maintain his composure.

"It was frustrating," Gabrielson said. "I tried to keep my cool and then during the conversation, he said, 'You're not a police officer.' I said actually I am but I'm completely off duty and I'm not in my jurisdiction. I was like look, I'll call the locals. I'll get the Frisco PD over here and they can take care of you."

Things eventually calmed down and Byrd and Gabrielson shared a friendly handshake.

Strict security measures were in place for the flat Earth conference because Gabrielson says they received some threats from people who would try to obtain fake badges and sneak into the proceedings.

"We're just being more observant this year," he says.

Barbieri has been known to show up at controversial protests, conference and political gatherings as Byrd for Kimmel's late night show. The Byrd character famously showed up at a political rally in a Theodore, Alabama, church starring former Senate candidate Roy Moore in a pro "Gimme Moore" T-shirt, where he yelled in the middle of Moore's speech that he was his "No. 1 fan" and asked, "Does that look like the face of a molester?" before being escorted out of the building.

The last time Barbieri was in Dallas was in 2015 during one of then-presidential candidate Donald Trump's rallies at the American Airlines Center. He somehow got a seat dressed as his Byrd character behind Trump's podium and could be prominently seen on camera in several newscasts screaming his enthusiastic support for "no more medicine" and showing a sign that read "You're hired." Trump even gave Byrd a thumbs-up after Barbieri's character yelled, "We love you, Donny!"

Gabrielson says he can laugh at the moment now since he found out Byrd was really just playing it up for the cameras.

"It's gonna be funny," Gabrielson says. "Maybe I'll be on Jimmy Kimmel Live! Hopefully he doesn't cut me out."

Barbieri could not reached for comment, because he would only answer as Byrd.
KEEP THE DALLAS OBSERVER FREE... Since we started the Dallas Observer, it has been defined as the free, independent voice of Dallas, and we'd like to keep it that way. With local media under siege, it's more important than ever for us to rally support behind funding our local journalism. You can help by participating in our "I Support" program, allowing us to keep offering readers access to our incisive coverage of local news, food and culture with no paywalls.
Make a one-time donation today for as little as $1.