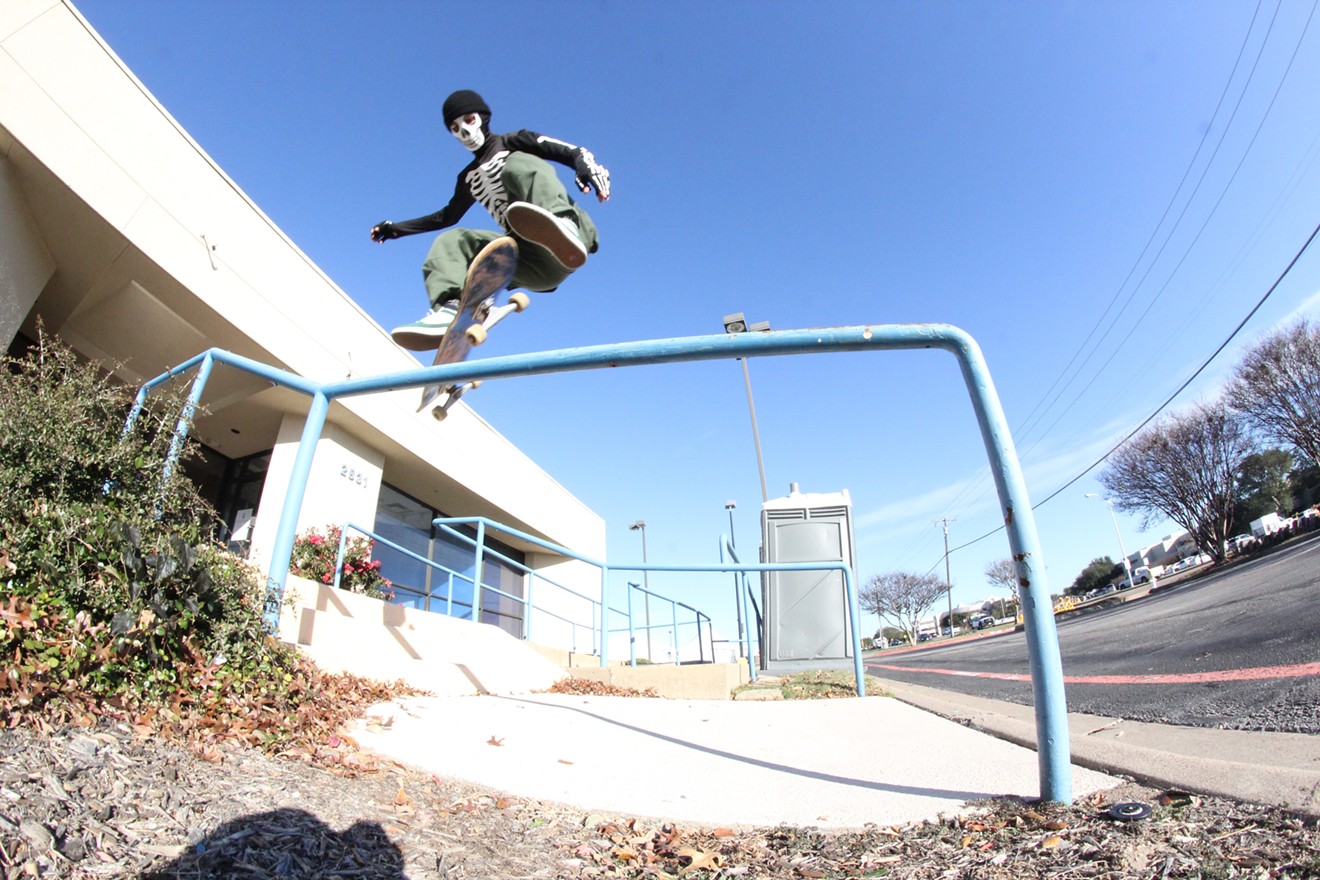 All the dude really wants is to just shred the urban jungle. Is that so wrong? Ribs Man

The video starts with a skeleton in a green beanie giving a security guard a high five. Then the skeleton, an Instagram phenomenon known as Ribs Man, hops on a skateboard and does a handful of smooth tricks across the wide steps in front of the American Airlines Center.

Toward the end of the clip, which has 40,000 views, another security guard appears. This one is less friendly. He lurches for the skateboard while Ribs Man is midair, sending him into a painful tumble. Ribs Man stands and he and the security guard wrestle for a minute. The guard pushes him back to the ground.

Ribs Man, a mysterious, all-terrain skateboarder from Dallas who wears a skeleton costume to obscure his identity, says encounters like these aren’t the norm, but when he visits some of his favorite skating spots downtown, he’s always prepared.

“Skating downtown in general — that’s gonna happen. That one was a little overboard,” he says of the September 2017 incident, adding that punches were thrown. “The dude, he tried to grab the board and take it from me. But usually that doesn’t happen. Usually they just tell me to leave.”

Ribs Man first started posting to Instagram a year earlier in the fall of 2016. Since then he’s posted 125 times, most of them videos shot on an iPhone at DFW locations. These range from local skate parks such as South Dallas’ 4DWN to more unconventional settings outside the AAC or the Mosaic Apartments on Akard Street.

Ribs Man’s videos have earned him more than 60,000 followers, who obsess over his skateboarding prowess and his clean style, and endlessly discuss theories about his identity. In one video Ribs Man taunts his fans, pulling off his skeleton mask only to reveal a second mask underneath.

Commenter taryjako claims to know Ribs Man’s identity in a recent thread. “I know exactly who he is, first and last name,” the Instagram comment says. In the same thread, Steezybreadsticks speculates that Ribs Man is professional skateboarder TJ Rogers. Miller.low.lyfe chimes in to insist Ribs Man is definitely different skaters assuming one identity. “He switches stances,” they offer as evidence.


Ribs Man’s videos have earned him more than 60,000 followers, who obsess over his skateboarding prowess and his clean style, and endlessly discuss theories about his identity.

The mystery surrounding Ribs Man brings to mind the famous street artist Banksy, whose every move is picked apart as evidence of his identity. “I’ve gotten (the comparison) a couple times,” Ribs Man says.

Although the Observer spoke to Ribs Man, we’re not at liberty to confirm or deny any of the theories about his identity. And that wouldn’t be very much fun, anyway. For the purposes of this article, we assume Ribs Man is one person.

When we catch Ribs Man on the phone, he is being ferried from a meeting at Red Bull headquarters in Santa Monica to another meeting. This next one is at the offices of iconic skateboard company Powell Peralta, which supplies him with everything from boards, to bearings to clothes.

Ribs Man also has his own line of merch, which he sells through an online shop at Big Cartel. One of his pieces, a long-sleeve T-shirt emblazoned with Ribs Man drinking a Lone Star beer, is sold out.

The business of being Ribs Man is “picking up,” he says. More and more, he has opportunities to market himself, whether that means new sponsors, invitations to elite skateboarding events or products bearing his image. But he says he doesn’t go looking — he’s not in it for the money, and that’s partly why he wears the disguise.

“I think (the anonymity) shows love for skateboarding — not doing it for money or exposure or anything,” he says. “It just shows that you like to skate enough to do it in a costume and tell no one about it.”

Pulling straight answers like these from Ribs Man is difficult. Here’s just a sample from our conversation:

How long have you been skating?
Forever.

How many of those skeleton costumes do you have?
What costume?

Did you have notoriety as a skater before Ribs Man?
No comment.

The disguise, the character, the deadly serious commitment to not being taken seriously — it’s all part of Ribs Man’s mission to generate more interest in skateboarding and help out the supporters he calls his “homies” along the way.

Ribs Man acknowledges that part of the interest in his account has to do with his skill. The tricks he performs in his videos are difficult, and except for the very occasional epic fall, he executes them with startling grace.

“It has to be something that I know people will enjoy,” he says, when asked how he determines what to post.

But he attributes his notoriety mostly to the mystery he has cultivated. He explains that to a lot of people, skateboarding has become kind of old hat. The whimsical costume encourages a second look and a shift in perspective.

“If it wasn’t a mystery I feel like it wouldn’t get as much attention,” he says. “People are curious. They’re like, ‘Why would someone skateboard in this suit? Why wouldn’t he want to be known? Why?’”

It’s a valid question, in an age when almost everyone is pursuing fame on social media.

But Ribs Man will tell you that aside from the fact that his anonymity is working to create a buzz around the sport he loves, he also enjoys the side effects. “It’s nice to be able to go out and skate and do things in the world as yourself and not be recognized,” he says.

And Ribs Man is an anomaly in more ways than one. Compared with so much of social media, his account is a surprisingly friendly and lighthearted place.

The comment section is full of fire and fist-bump emojis, and in his posts, Ribs Man spends a lot of time thanking the people and companies who have given him a leg up. He sent us a list of 20-plus names he hoped would make it into this article, including 4DWN and Powell Peralta, but also Bones Wheels, Bones Bearings and éS Skateboarding.

A lot of his gratitude is directed at Dallas. “There is a lot of talent here and a great scene,” he says. “There’s always something to do or something to see.”

“Whoever’s having the most fun,” he says.

Watch Ribs Man in action below: