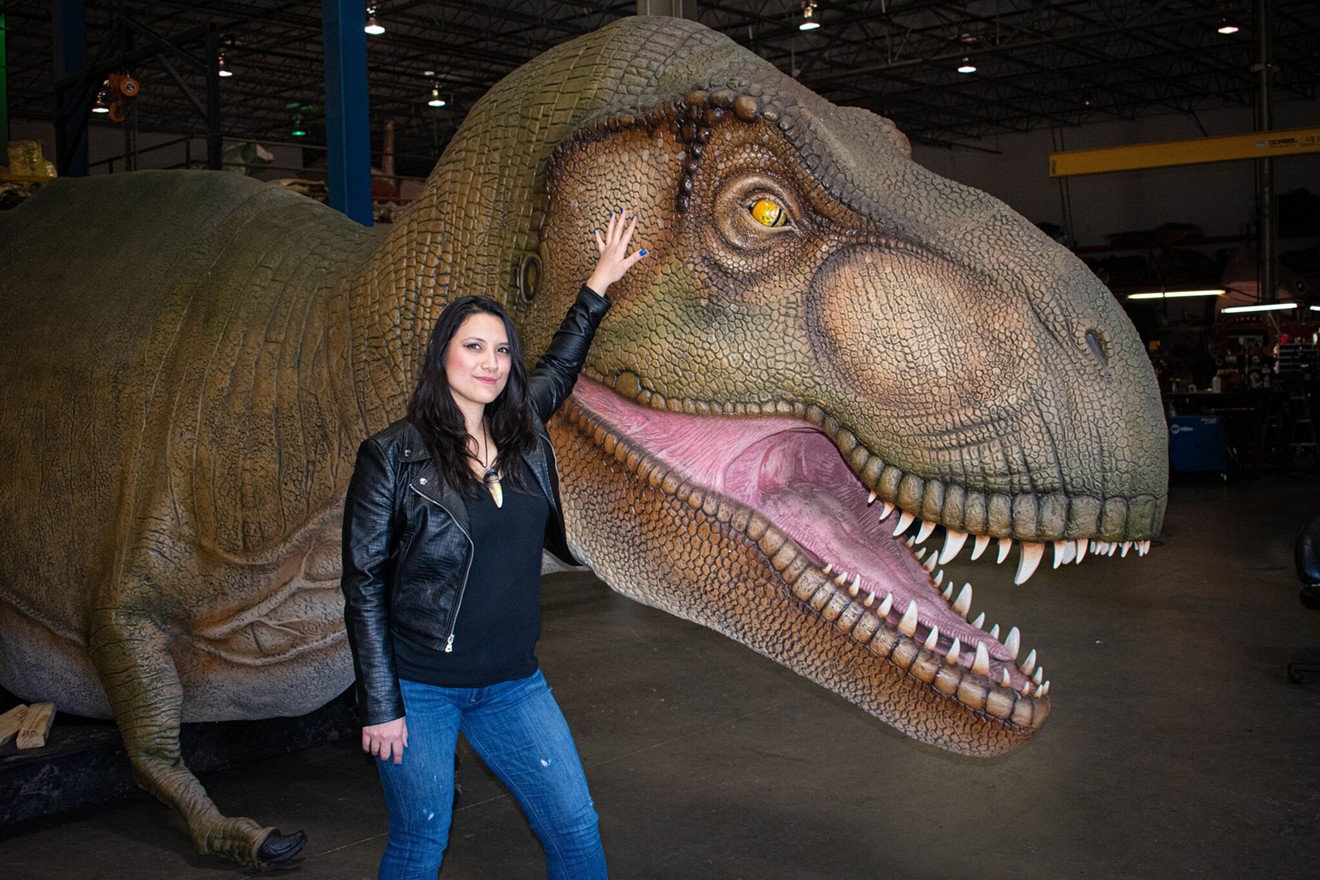 You can now meet lifelike dinosaurs in Allen, and we don't just mean sugar daddies-to-be at the bar. Melissa Battle / Billings Productions


Raptors and Triceratops and T. rex will now be created in North Texas. But not like that eccentric guy with the hat did in Jurassic Park. Billings Productions, Inc. is the nation’s leading manufacturer of dinosaur animatronics, and this summer it’s migrating to new digs in Allen.

Vice president of operations Lauren Billings says she’s excited to shepherd her prehistoric herd to the new 50,000-square-foot facility. With 40 workers and around 430 creatures, their present dino menagerie is getting a little cramped.

“There are days where you can’t walk to certain rooms because there’s a T. rex in the way,” the 30-year-old entrepreneur says of their Allen warehouse.

The company is a go-to for museums and zoos, but the facility will also be open to the public.

Using the trademarked moniker The Dinosaur Company, Billings Productions also offers prehistoric predators like the saber-toothed tiger and megalodon, a type of gargantuan shark. Plus, they carry a creepy-crawlies series containing a 20-foot tarantula, enormous emperor scorpion and the world’s most invaluable species: the humble bumblebee.

Dealing with dinosaurs can make a person contemplate the fragility of the earth’s ecosystem, which is why Billings Productions approaches business from a steadfast standpoint toward conservation. They temporarily lease items to museums and zoos to highlight the expired existence of these bygone beasts.

“Dinosaurs are of course extinct, but what’s even scarier is there’s animals we have now that are very dangerously close to being extinct,” Billings says. “And so that’s where we partner up on that message.”

In addition to conventional office staff, Billings Productions employs a pack of welders, engineers and artists. And every general labor employee has to learn how to fashion dinosaur skin, which Billings jokes isn’t “something you go to college for.”

The business was originally founded in McKinney in 2003 by Billings’ parents, Larry and Sandra. Her dad learned the tricks of the trade after working for a dinosaur animatronics business in California. When Larry died in 2007, Sandra succeeded him as the company’s president.


“Dinosaurs are of course extinct, but what’s even scarier is there’s animals we have now that are very dangerously close to being extinct." — Lauren Billings

Billings’ father was determined to create hyper-realistic animatronics based on the most current scientific research. And like him, she says she loves to see how her family’s colossal creations fill kids with awe.

“You know you’re doing your job right when they point at something and go, ‘Oh my gosh, is that a Quetzalcoatlus?’” Billings says.

Barring a faction of deniers, most people don’t dispute that dinosaurs once roamed the earth. Still, some may quibble about the proposed timeline. Most scientists believe that dinosaurs lived between about 245 to 65 million years ago. But a recent Gallup poll found that 40% of Americans are creationists who believe the earth is less than 10,000 years old.

Either way, Billings is careful to steer clear of the “E” word; evolution is still a theory at the end of the day, she says. (And hey, it is technically possible that Noah’s Ark could fit the 60-foot Sauroposeidon. Who doesn’t love a good vaulted ceiling?)

For the most part, Billings’ products don’t ruffle too many feathers, but there are the occasional pint-sized exceptions.

“We mainly get angry kids who are mad that the dinosaurs aren’t real,” she says. “Those are my angry customers.”

The upgraded facility, which is being constructed near Allen’s Watters Creek mixed-use development, will offer more space for events, tours and field trips. Dan Bowman, the executive director of Allen’s Economic Development Corporation, played an integral role in securing the new space.

Allen is enjoying a trajectory of economic growth, Bowman says. Not only do people increasingly commute there for work, but the city also attracts tourists with destinations like its outlet mall and Cabela’s store.

“You add in things like dinosaurs, and you really could make a whole weekend of just going to Allen and checking out all these cool things we have,” Bowman says.

Anyone familiar with Billings Productions’ animatronics is bound to have their favorites. Ever the traditionalist, Bowman says his is the Tyrannosaurus rex. But Billings herself has two: the Coelophysis, which likes to “bark” at passersby, and the Carnotaurus because of its peculiar anatomy.

Although the company’s work is rooted in the most credible scientific theories, Billings says its workers still exercise their imaginations. Sure, scientists can hypothesize how a dinosaur looked based on fossil evidence, but it’s impossible to determine exact skin pigmentation or how it sounded.

Billings says the family business places great value on education. She hopes that in addition to learning about the dinosaurs, the company’s animatronics will increase kids’ interest in the STEAM fields.

But her all-time “pie in the sky dream” is to help a wife-to-be host her wedding at the facility. “I know there are brides out there who want to get married next to a T. rex,” she says.

Even though she was 12 when her parents started the business, Billings is fully committed to continuing its success. Unlike the doomed dinosaurs, she hopes to make her father’s legacy immortal.

“By sharing his vision with the public and sharing his passion with the world,” she says, “it’s like I’m keeping him alive.”
KEEP THE DALLAS OBSERVER FREE... Since we started the Dallas Observer, it has been defined as the free, independent voice of Dallas, and we'd like to keep it that way. With local media under siege, it's more important than ever for us to rally support behind funding our local journalism. You can help by participating in our "I Support" program, allowing us to keep offering readers access to our incisive coverage of local news, food and culture with no paywalls.
Make a one-time donation today for as little as $1.