6 Places to Visit Where Movies Were Filmed in DFW 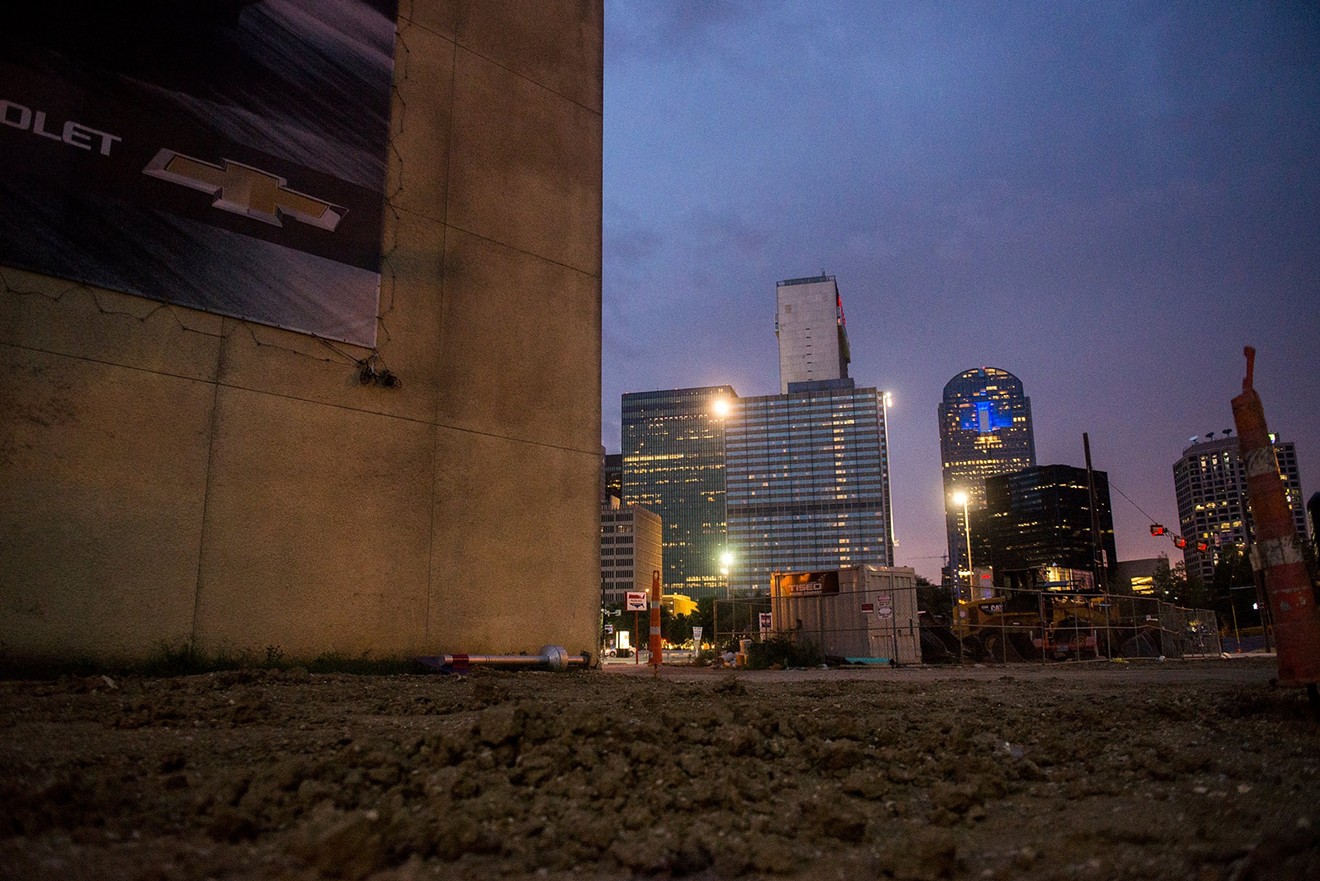 Looks just like Robocop. Brian Maschino
The magic of moviemaking convinces an audience that it's seeing far-away, sometimes magical places when in reality it’s a series of green screens and camera tricks. The streets of Victorian-era London are just a soundstage in Atlanta, the deserts of Egypt are a plot of land in New Mexico and rarely, a movie that takes place in Detroit is filmed in Dallas. Hell, movies that take place in Dallas don’t always film in Dallas, so we’re lucky to get what we can get.

Some of the places where movies were shot in Dallas are still standing, and you can visit. There's a chance you’re in one of the buildings right now and didn’t even know it. Look around: Are there knives and torture objects surrounding you like on the set of Saw? That’s unfortunate because Saw wasn’t filmed in Dallas — you’re in a dangerous place and need to get out. For everyone not running for safety, you’re probably wondering where some of these locations are.

We’ll keep this limited to movies because television shows would include Walker, Texas Ranger, making the list go on infinitely. There was a time you couldn’t consider yourself a resident of Dallas until you were dressed as a drug dealer and kicked through breakaway glass by Chuck Norris. So TV aside, here are some movie locations in Dallas you can see in person.


Dr. T and the Women
It’s difficult to limit Robert Altman’s dramedy about Richard Gere as a successful gynecologist in Dallas to one location; the movie incorporates so many aspects of the city into its plot. The film’s worth a watch just to see how many Dallas locations you can spot. Pre-Sharknado Tara Reid is a tour guide at the JFK Conspiracy Museum, and Dallas Cowboys Cheerleader Kate Hudson’s wedding takes place at the Dallas Arboretum. The city of Dallas is its own character in the movie, the film being one part celebration of and one part send-up of the culture of the area.

NorthPark Center is used in a prominent early scene when Gere’s wife, the late Farrah Fawcett, has a mental breakdown and strips in the fountain next to the Godiva store. There’s a generation of men that grew up with Fawcett’s poster on their walls and probably never realized she was nude in a fountain they’ve sat at in boredom.


JFK
When Oliver Stone made 1991’s JFK, there were accusations from historians that he sensationalized the president’s death with a plot not interested in the facts surrounding Kennedy’s untimely end. The film starred Kevin Costner as District Attorney Jim Garrison and followed his journey to unravel the conspiracy of the Kennedy assassination and bring all guilty parties to justice. As we all know, the murder was solved, and everyone completely agrees on what happened without any debate.

While the script of the story might be in question, Stone painstakingly re-created Dealey Plaza to what it looked like on Nov. 22, 1963, using a mixture of recorded footage and witness accounts. For weeks, streets were shut down as the production crew worked on rolling back time three decades for a 10-day shoot.

Robocop
When most people look at downtown Dallas, they think it could pass for a futuristic Detroit. At least, that’s what Paul Verhoeven thought when he filmed 1987’s Robocop. A portion of the shoot took place at the now-defunct Film Studios in Las Colinas, but many Dallas landmarks get the grim Detroit treatment.

The police station in the film is two Dallas locations. The interior is the Sons of Hermann Hall building in Deep Ellum, and the outside is the Dallas High School building. Robotic carnage also took place at Dallas City Hall, which stood in for the evil Omni Consumer Products company. No word on whether anyone in City Hall is planning to roll out a mechanized police force, but the Segway cops are probably a test run.


The Rookie
Disney’s The Rookie was the feel-good movie for every aging athlete who fantasized about getting one more shot to play in the major leagues. The film starred Dennis Quaid, a Texas high school baseball coach who makes a deal with his team that he’ll try out for the pros if they make the playoffs. The team does, so he does, and then an animal’s mom probably dies because it’s a Disney movie.

Most of the filming occurred outside of Dallas, but filming also took place at the Ballpark in Arlington, or Globe Life Park, or Empty Lot Park in 2021. Now would be a great time to say your goodbyes while the Texas Rangers are still playing there. Every time someone strikes out, you can yell, “Give 'em hell, Dennis Quaid,” because you don’t know the names of any of the Rangers.


Bottle Rocket
Before Wes Anderson commanded a shelf on every hipster’s wall of movies, he was a fledgling filmmaker working on his first film, Bottle Rocket. This was also the feature debut of Luke and Owen Wilson, the latter of whom co-wrote the script with Anderson based on a short of the same name. The film follows a group of associates attempting a life of crime, resulting in quirky hijinks that Anderson became famous for.

A Houston native, Anderson stayed in his hometown state while filming, using locations in Dallas, Fort Worth and Hillsboro. To see where it all began, visit the Highland Park Soda Fountain, the site of a scene used in the short. Grab a shake, sit at the counter and do your best Owen Wilson impression. See how not charming it is if your bank account doesn’t look like his.

Born on the 4th of July
Stone pops up on this list again. If this was a comprehensive list of everything shot in Dallas, Stone’s name would appear over and over because he used the city as his backdrop numerous times. Honorable mentions go to his films Talk Radio (watch it) and Any Given Sunday (don’t) for bringing work to people claiming to be Dallas actors. Neither of those saw Tom Cruise, though, so a spotlight goes to Born on the 4th of July, a film chronicling the life of Ron Kovic and his experiences in Vietnam. The movie earned Academy Award nominations for best director and best editing and nabbed multiple nominations at the I Can’t Believe It’s Not Butter of award shows, the Golden Globes.

Scenes were shot at the Dallas Convention Center, and Stone used the Los Colinas soundstage as well. If you like your sightseeing with a side of liquor, stop by Dallas sports bar Milo Butterfingers to see where part of the movie was filmed. There’s no guarantee, but it might still have one of the step stools Cruise had to stand on to look 5 feet tall.
KEEP THE DALLAS OBSERVER FREE... Since we started the Dallas Observer, it has been defined as the free, independent voice of Dallas, and we'd like to keep it that way. With local media under siege, it's more important than ever for us to rally support behind funding our local journalism. You can help by participating in our "I Support" program, allowing us to keep offering readers access to our incisive coverage of local news, food and culture with no paywalls.
Make a one-time donation today for as little as $1.