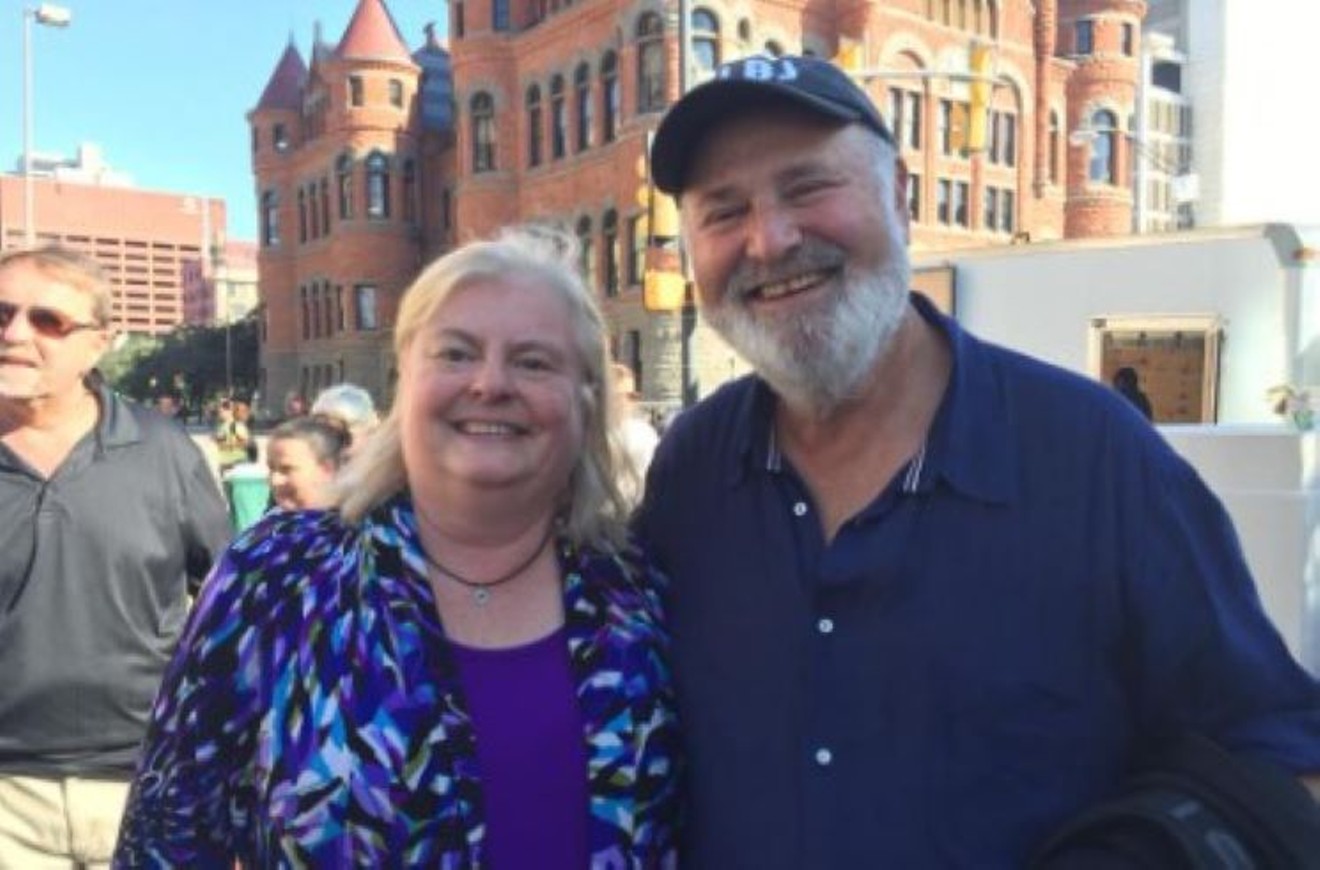 Dallas Film Commissioner Janis Burklund, left, poses for a photo with director Rob Reiner while he shoots scenes in downtown Dallas for his 2017 biopic of President Lyndon B. Johnson. courtesy of Janis Burklund
Twenty years ago, the city's film commission had reached the end of its financial rope, leading the Dallas/Fort Worth Regional Film Commission to its inevitable collapse. A month later, the Dallas Convention and Visitors Bureau — now called VisitDallas — decided the city that gave the world movies RoboCop and Born on the Fourth of July, TV shows Dallas and Walker, Texas Ranger and countless commercial productions still needed someone to champion the city as a place for film.

The bureau created the Dallas Film Commission and named Janis Burklund, who worked on some of the city's biggest projects as a production assistant and location manager, the commission's project manager. A year later, she became its commissioner.

"A lot of people didn't understand or think of Dallas as a creative city," Burklund says. "Dallas is more of a big business city, and I wanted to help elevate Dallas, because it is a creative city."

Burklund's time as film commissioner attracted productions to Dallas that were seen around the world, among them the hit FOX drama Prison Break, the Discovery Channel reality show Fast 'N Loud and movie productions such as The Ant Bully, Parkland and Hulu's adaptation of Stephen King's sci-fi novel 11.23.63.

In that time, the office moved twice and rebranded itself last year as Dallas Creative Industries, encompassing all of the area's creative productions and expanding endeavors to sectors like video games, podcasting, publishing and virtual reality. Now she says she's decided it's the right time to retire.

"I usually take from Christmas to the first of the year off, and it was really hard to go back to work after the last Christmas break," Burklund says with a laugh. "The way things have been going, and I'm just so tired, I decided to go ahead and call it."

Being tasked with bringing big film, TV and other media productions to Dallas and the surrounding areas became a bigger challenge with smaller incentive rates and a lack of professional studio space, Burklund says.

"We just went through the money so fast, and it can't be funded against until September of 2023," Burklund says. "We've been busy with commercials and got The Chosen here, but the chances of getting another big series is very limited because of not having incentives. So it felt like a good time to go ahead and go out instead of in the middle of something."

Janis Burklund worked on the set of the CBS action drama Walker Texas Ranger as a location manager while the production filmed in Dallas.
Courtesy of Meg Gould
Burklund says she and her staff were able to keep productions interested in Dallas even during tough times like the COVID-19 pandemic.

"During the pandemic, it never fully stopped," she says. "We had a very, very short window of time where we weren't shooting, but it was very short lived and became as busy as ever, but in a different way. A lot of different commercials wanted to shoot here."

Even with smaller incentive budgets and logistical obstacles, Burklund says she's been able to expand the city's directory of possible productions. The reorganization of the office into Dallas Creatives puts all of the city's artistic productions and projects including publishing, game development and music into one focused effort.

"When I was talking to these other sectors, you realized there was a lot of silos and they didn't know each other," Burklund says. "A handful of people on the film side worked on the music side, so we thought if we could pull them together, we could create some synergy and get them working together more."

There are creative ways to bring creative projects to the city. In 2009, FOX decided to set the police sitcom The Good Guys in Dallas when it learned it could shoot exterior shots around the city and interior shots by turning buildings in Fair Park to studio sets. Burklund says the plan worked because "one of the things that's lacking was adequate studio capacity."

"When The Good Guys was there, the production was going well and the network was liking the shows and ordered more episodes, but the problem was the window of time we gave them didn't fit because the fair was coming in," Burklund says. "So we had to hurriedly find another place for them, and that was the birth of South Side Studios."

No matter how much creative maneuvering and ingenuity the staff and community can do, it still comes down to numbers and space, and things like the state's dwindling incentive percentages don't help.

"I believe we could've had more if we had more infrastructure, but you only have so much with the state incentives," Burklund says. "We could have so much more that comes in if we had more to support it. I would like to think [that] at some point, the powers that be will understand that it's a good return on the investment, jobs and good tourism dollars because people like to go see the places where things have been filmed."

Despite the obstacles and challenges of the job, Burklund says she has "very good memories" of her 20 years of service to the city's film and TV productions.

She says "it feels like the right time to hand off" the job to someone else with the same drive to make Dallas a production destination.

"I hope that the next batch will have the support they need to take it the way they should go," Burklund says. "I'm not gonna have any say about that, but I feel like I've it in as good of play as I could. The ideas are there. The plan is there. I just won't be there to execute the last parts of it.

"I feel good about what I've done, and I just feel like it's time for a change for me," she says. "The most important part of how it succeeds in the future is if it's supported properly and that remains to be seen."
KEEP THE DALLAS OBSERVER FREE... Since we started the Dallas Observer, it has been defined as the free, independent voice of Dallas, and we'd like to keep it that way. With local media under siege, it's more important than ever for us to rally support behind funding our local journalism. You can help by participating in our "I Support" program, allowing us to keep offering readers access to our incisive coverage of local news, food and culture with no paywalls.
Make a one-time donation today for as little as $1.