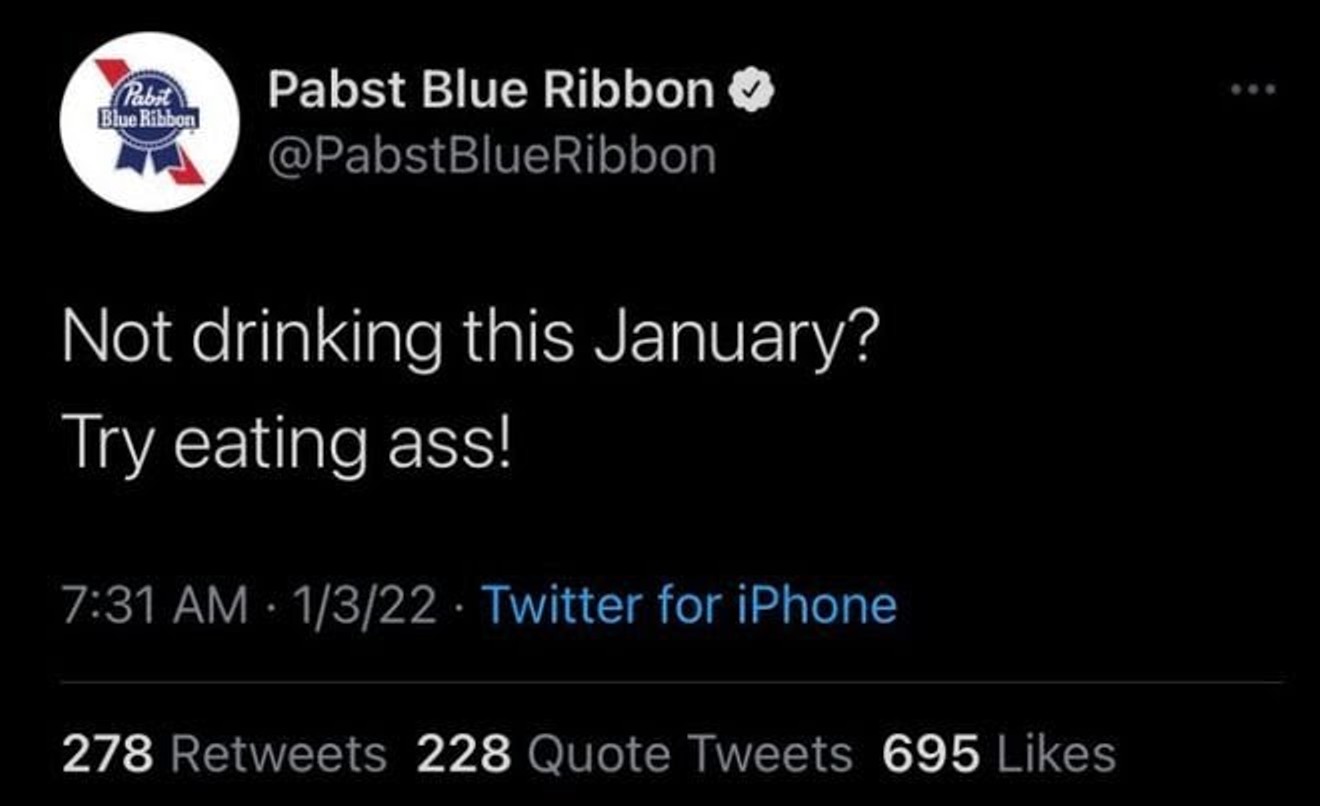 screenshot from Twitter
As we enter the third calendar year of the pandemic, all of us are feeling the weight of the past years on our shoulders. While most professionals have to maintain a certain composure on Zoom meetings and email threads, some others take a more emotional route and use social media to express their frustrations.

Social media management may seem like an easy career, but dealing with trolls, rude commenters and Karens on a daily basis can feel like a thankless job, and some businesses' social media editors have been caught having some rough days in front of millions of followers. Fortunately for us, these tweets have made for some absolutely iconic social media moments.

Here are some of our favorite savage social media posts made by companies.

Crooked Crust
Crooked Crust is a favorite among Denton's University of North Texas college students. It’s open until 3 a.m. on weekends and makes a great drunk meal after a night on Fry Street. It’s also open for a midday snack — if you need a depression slice after failing your physics exam. They’ll make you just about any pizza you want, with a variety of toppings and sauce options. Just don’t ask for a calzone. In November, the pizzeria said its piece unequivocally by tweeting: "We don't sell calzones. The closest you'll get is us putting sauce and cheese in a Ziploc baggie for you."

We don’t sell calzones. The closest you’ll get is us putting sauce and cheese in a ziploc baggie for you

Pabst Blue Ribbon
In a now deleted tweet from Jan. 3, Pabst Blue Ribbon recommended that those observing Sober January should try "eating ass." We don't know how much beer they drank before signing off on the post, but the company has since apologized for the (presumably former) employee's "poor judgment." Look, we could eat ass or we could drink PBR. We're pretty sure they taste the same. 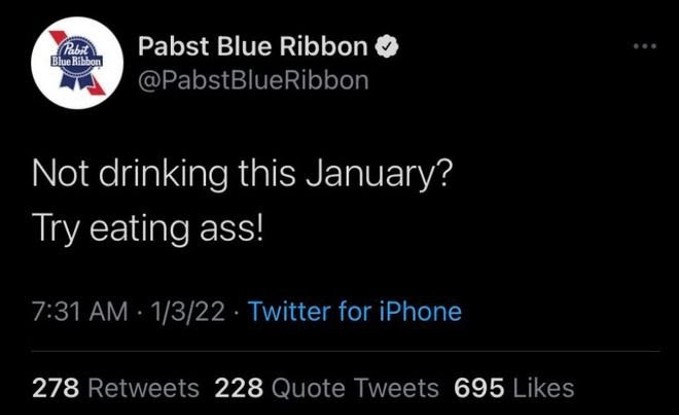 screenshot from Twitter
Wendy's
Whoever is behind the Twitter for Wendy's is a roasting legend whose savagery deserves a raise every single month. The company gets into endless wit-battling threads with competitors such as McDonald's and even with its own customers. Who can forget the time a user "proved" he could recite the Wendy's menu from memory by posting a photo of a trash bag, and the chain responding with "Thanks for sharing your baby pictures"? They'll also take the time to explain basic economics to people asking for free Frostys that cost 50 cents.
click to enlarge 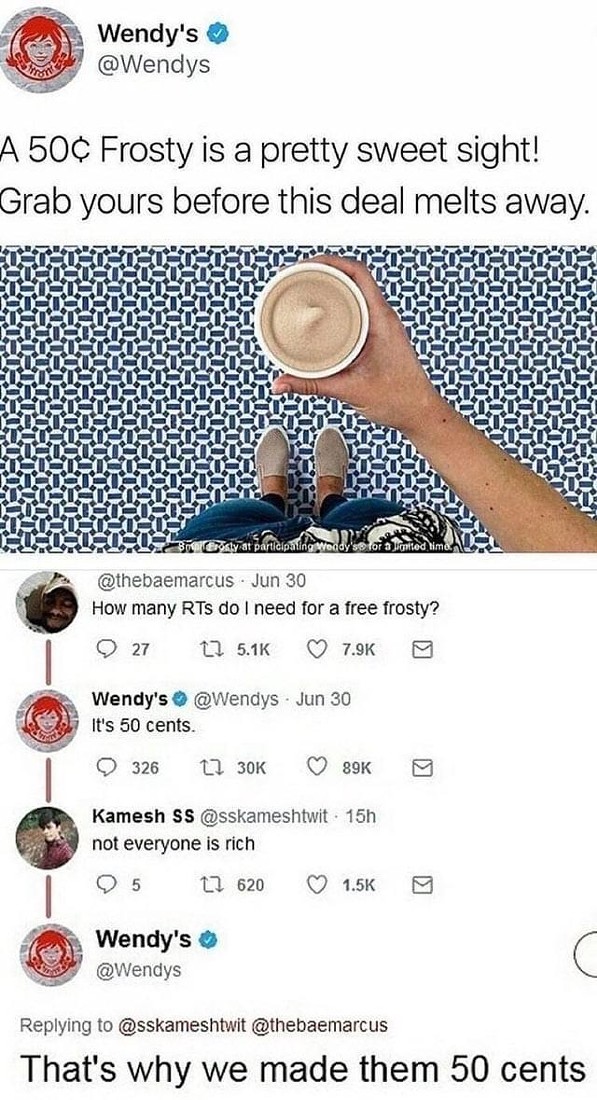 Rihanna
Superstar Rihanna is technically a brand now, right? She sure has taken some time away from being a musician. Just don’t ask her when the album is coming. She’ll just give you an update on which of her Fenty products has sold out, completely unbothered.

how I woke up after #FENTYPARFUM sold out this morning!!! pic.twitter.com/JB1e5birlE

Merriam-Webster
The dictionary itself chose the word “vaccine” as the word of the year for 2021. It's not necessarily an overtly savage tweet, but we're living for the subtle shade.

The word ‘vaccine’
- saw a 601% increase in lookups this year over last.
- had continual spikes of attention through the year.
- was about much more than medicine in 2021.

Moon Pie
It was the last day of 2021, and Moon Pie just didn't give af. Presumably making fun of increasingly loosened CDC restrictions as COVID cases continued to peak, the company tweeted: "I think the CDC said you can dip a MoonPie in something strong and just try to forget this year ever happened." Sounds like an odd combination, but it definitely beats drinking your own urine.

Netflix
Netflix isn’t just for streaming. The company also keeps us glued to our devices through its Twitter presence, where they've crafted some pretty classic tweets over the years. Even if one of them was a slight jab to our hometown hero Post Malone.

beerbongs & bentleys is out april 27 pic.twitter.com/h254GmcWXR

Campbell's
Just a reminder not to mess with the LGBTQ+ fam this soup season; Campbell’s certainly won’t have it. 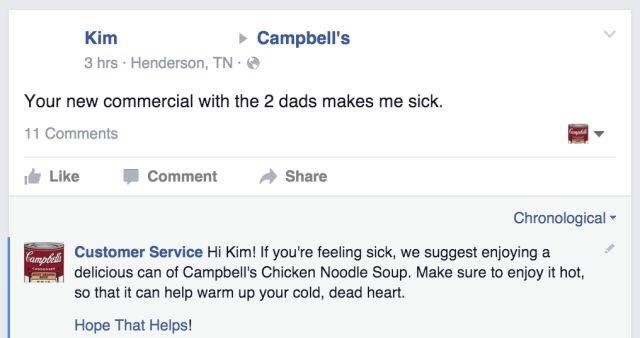 Hulu
When Hulu put out an online ad featuring model Kendall Jenner, it was flooded with sexist comments from thirsty men. But the streaming site handled them in the classiest of ways, by sticking to the company's message: selling yet another streaming service that'll make you pay extra to watch the show you're actually looking for.
click to enlarge 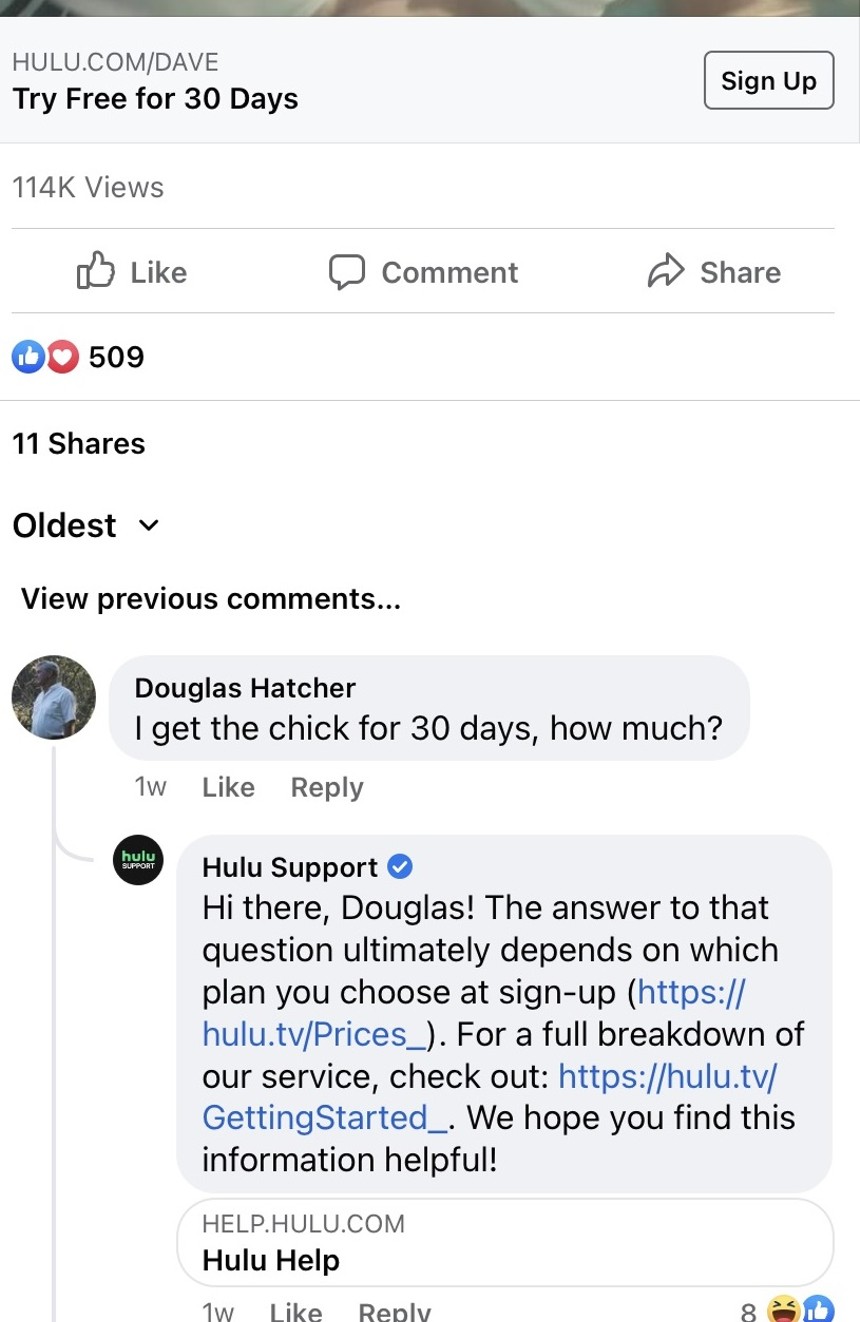 Screenshot from Facebook
KEEP THE DALLAS OBSERVER FREE... Since we started the Dallas Observer, it has been defined as the free, independent voice of Dallas, and we'd like to keep it that way. With local media under siege, it's more important than ever for us to rally support behind funding our local journalism. You can help by participating in our "I Support" program, allowing us to keep offering readers access to our incisive coverage of local news, food and culture with no paywalls.
Make a one-time donation today for as little as $1.