From Houdini to Barney, A Look Back at The Majestic's Key Moments As It Turns 100 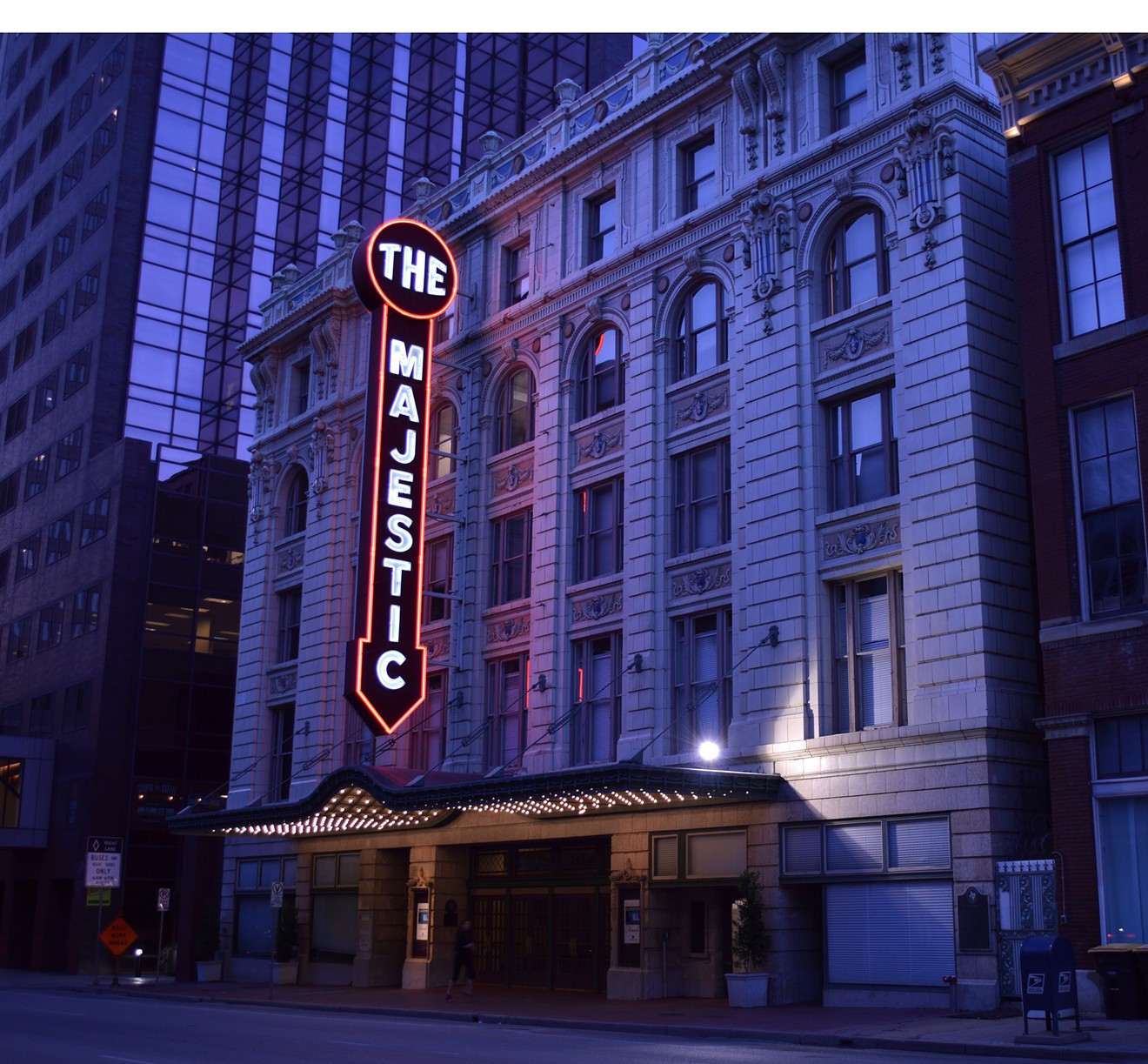 Throughout its long, regal years since it first opened its doors, the Majestic has hosted a variety of acts — from Bob Hope to Barney the Dinosaur —  giving Dallas the best of off-brand Broadway and hell, we’ll take all of it. courtesy the Majestic Theater

Dallas has often been at the forefront of art and culture in Texas and the Majestic Theater in downtown is one of the many landmarks that have given the city that distinction.

The theater turned the big 100 this year, making it a historical landmark, which they celebrated this October with a "Best of Broadway" series. Since it first opened its doors, the Majestic has hosted a variety of acts — from Bob Hope to Barney the Dinosaur —  and given Dallas the best of off-brand Broadway.

The theater has been featured on many prominent advertising and branding campaigns. Sure, the oversize “THE MAJESTIC” sign is probably not as famous as the red pegasus or the Reunion Tower, but its grand and (of course) theatrical presence is classic.

Today, the Majestic is a spot to catch up on classics — such as It's a Wonderful Life at Christmas time — take selfies in front of the foyer's splendid gold mirrors or catch a Chaplin movie with live score. Here are a few great moments of the legendary theater from its opening in 1921 to its post-COVID reopening in 2021.
click to enlarge

The Majestic is looking pretty good for a centenarian.
Joe Mabel

1921:
The Majestic Theater opened on Elm Street in downtown Dallas on April 21, 1921. Originally designed by architect John Eberson as a vaudeville theater, The Majestic hosted entertainment that featured comedy and dance acts, magicians, acrobats and even trained animals. Sounds like all they really needed was a tent and some clowns. Harry Houdini often performed at the theater in its early days.
click to enlarge

The theater in its early days in the 1920s.
courtesy The Majestic


1932:
In the early 1930s, the Majestic Theater's owner, Karl Hoblitzelle, began showcasing the next generation of entertainment media: movies.

The Majestic earned the title of “man’s house” thanks to films with prominent male leads such as Errol Flynn, James Cagney and Clark Gable. Meanwhile, the nearby Palace movie theater was referred to as the “ladies’ house” because it showed films with female leads.

1977-1983:
Four years after it showed its last film, the Majestic Theater became the first building in Dallas to be listed on the National Register of Historic Places. Later on, other buildings such as the former Texas Schoolbook Depository, now known as the Sixth Floor Museum, were also listed.

The Majestic Theater reopened to host musicals and other stage productions such as concerts.

1991:
The stars of the greatest straight-to-video series of all time (not really,) Barney and the Backyard Gang, performed at the Majestic Theater in March 1991.

Barney, a soft, cuddly and purple talking dinosaur, was PBS’ biggest star during the '90s, and his TV show was filmed in North Texas. The entire Majestic Theater show can be found on YouTube.

The Majestic show featured the oversized purple monster and his “backyard gang,” a group of kids donning yellow T-shirts with their names on them, holding hands and singing along to frightening lullabies that the audience reluctantly seems to take part in. It’s all pretty horrendous especially knowing that the theater once hosted the likes of Jimmy Stewart. But hey, we all have regrets.

One segment of the show played the most absurd Walker Texas Ranger clips and took a dig at neighboring Fort Worth (“The show isn’t called DALLAS FORT WORTH!” O’Brien exclaimed) and the show gave the city some excitement that wasn’t centered on sports. Downtown even had a ginormous Conan O’Brien bobblehead in the middle of Main Street Park. You just don’t come by that every day.

2021-2022:
Starting this week, Lyric Stage, a Dallas-based not-for-profit theater company, will host numerous Broadway-style events including the Best of Broadway on Oct. 29-31. The event is a jam-packed, 100-minute concert that celebrates the 100-year old theater with Broadway classics.

In 2022, the theater will also serve as host to three Tony Award-winning musicals: Ragtime, A Funny Thing Happened on the Way to the Forum and Cabaret. Even as it enters the next century, things seem to be looking up for the majestically Majestic. Just keep the purple T-Rex out.
click to enlarge

The Majestic's stage has seen stars from Houdini to Conan O'Brien.
courtesy The Majestic
KEEP THE DALLAS OBSERVER FREE... Since we started the Dallas Observer, it has been defined as the free, independent voice of Dallas, and we'd like to keep it that way. With local media under siege, it's more important than ever for us to rally support behind funding our local journalism. You can help by participating in our "I Support" program, allowing us to keep offering readers access to our incisive coverage of local news, food and culture with no paywalls.
Make a one-time donation today for as little as $1.