Artist Ho Tzu Nyen asks what defines Southeast Asia in an exhibition on view at the Crow Museum. Paige Weaver
On Sept. 25, Dallas' Crow Museum of Asian Art premiered the U.S. opening of the 2017 exhibition Critical Dictionary of Southeast Asia, a moving image installation by Ho Tzu Nyen that questions widespread (mis)conceptions viewers may have about the region.

“In this piece, Ho asks what defines Southeast Asia,’” says Dr. Jacqueline Chao, senior curator at the Crow Museum. “It’s such a large region that we refer to, but it’s very disparate and diverse. It’s not unified by language, religion or political power. So why do we still refer to it as a whole?”

Ho was an artist in residence at Asia Art Archive Hong Kong in 2013 when he first started examining this sweeping concept of Southeast Asia.


From this research, Ho assembled a dictionary, assigning one to three of these terms to each letter of the Latin alphabet, from altitude and anarchism to zone and zoomorphism.

From this research, Ho assembled a dictionary, assigning one to three of these terms to each letter of the Latin alphabet, from altitude and anarchism to zone and zoomorphism.
Paige Weaver
Ho began the piece in 2017, working with software developer Jan Gerber and media artist Sebastian Lütgert to create an algorithm that pulls together found footage, text and music relating to each term in the dictionary.

The algorithm combines all the footage together while also randomly bursting light, breaking up the stream of images.

As the installation moves from term to term in alphabetical order, Ho narrates texts pulled from his research notes. He invited Singaporean musician and vocalist Bani Haykal to sing some of the narration as well.

You can read more extensive notes from Ho’s research in an adjoining room in the museum. The installation is a living piece that runs on an infinite loop. Because of the algorithm driving it, no two dictionary entries will be the same, with varying images and intermittent bursts of light.

“The whole experience asks ‘How do we really understand what something is?’ That’s what Ho is interrogating,” Chao says.

The piece also exists online at cdosea.org, but it's not the same immersive execution with which Ho confronts visitors at the Crow Museum.

Attendance to the Crow Museum (2010 Flora St.)  including this exhibition, is free. The Critical Dictionary of Southeast Asia runs through Jan. 30.
click to enlarge 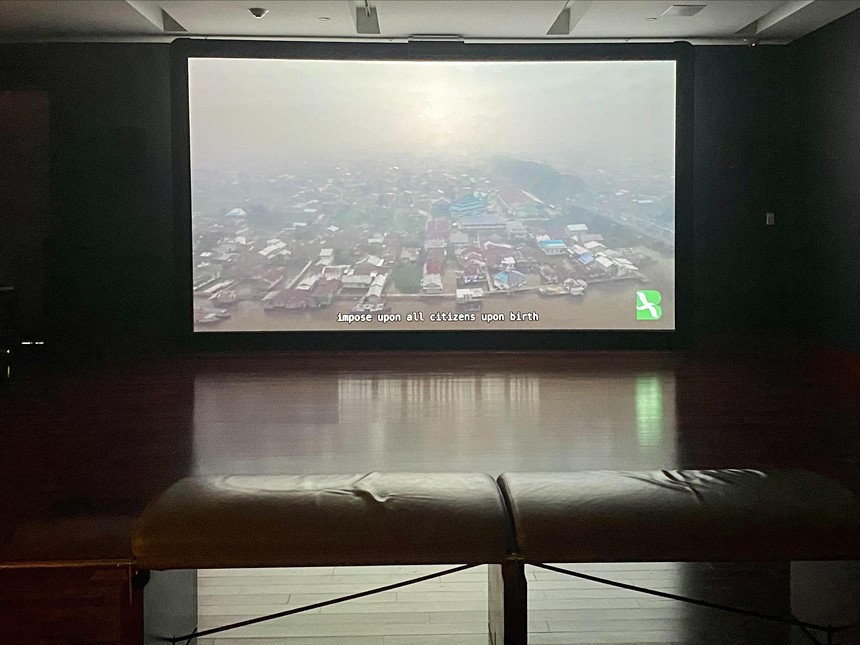 The installation relies on an ever-changing algorithm.
Paige Weaver
KEEP THE DALLAS OBSERVER FREE... Since we started the Dallas Observer, it has been defined as the free, independent voice of Dallas, and we'd like to keep it that way. With local media under siege, it's more important than ever for us to rally support behind funding our local journalism. You can help by participating in our "I Support" program, allowing us to keep offering readers access to our incisive coverage of local news, food and culture with no paywalls.
Make a one-time donation today for as little as $1.
Paige Weaver
Contact: Paige Weaver