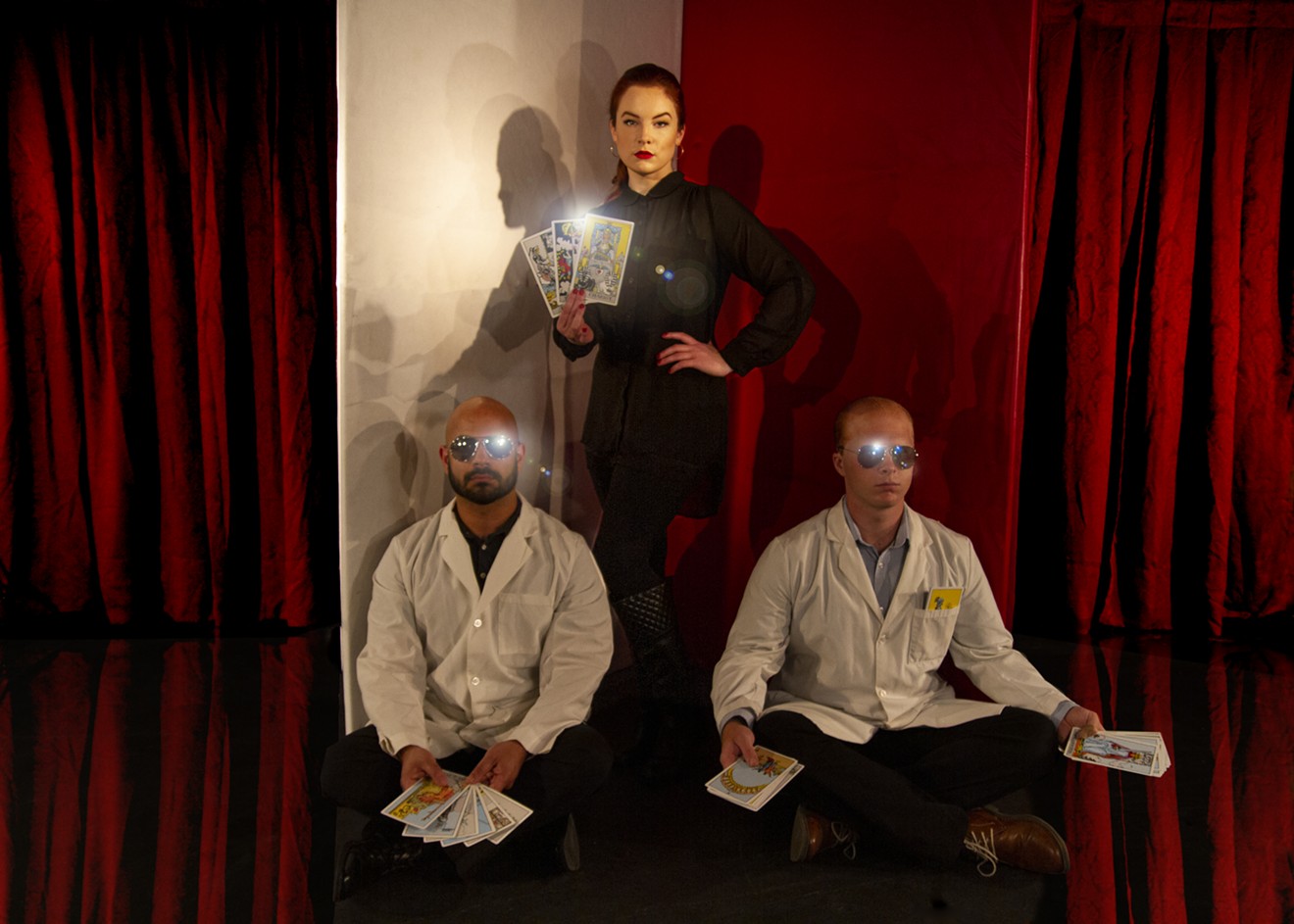 
You can read the synopsis. You can look at the production photos. You can even read reviews, previews, interviews. You still won’t have a complete understanding, when you sit down to watch Red Chariot, of what exactly the play is about. Something about tarot cards, something about the internet, something about the past, present and future. But what’s going to happen once the lights dim and the actors step upon the stage? You’ll just have to wait and see, you suppose.

But waiting and seeing will not clear up the plot of Red Chariot.

Rather, you will wait and see yourself utterly drawn into a story that blatantly ignores rules of narrative and doesn’t much care whether the audience can follow exactly what happens. What’s going on in the story is way too important for the actors to worry about the audience’s capacity to understand all the ins and outs.

For this play is designed contrary to most. Often, a play is crafted for its audience: a playwright includes all the plot and character details necessary for the viewers to relate to and comprehend the story. Not so for Red Chariot. Playwright Gordon Dahlquist and director Blake Hackler seem to have completely disregarded their audience in crafting this play. And yes, that means that a lot of plot details are left out; characters flit on and off stage without the audience totally understanding who they are; actors switch roles without telling the audience explicitly. With a lesser production, these mind-bending jumps might frustrate audiences. But watching Red Chariot, we feel privileged to sneak our way into the vivid world created by the cast and crew at Undermain Theatre.

A world premiere, Red Chariot kicks off Undermain Theatre’s 2019-20 season, and it’s the first production since the loss of founding artistic director Katherine Owens. Red Chariot is proof that Undermain will carry on her tremendous artistic legacy.

But how did the great minds behind Red Chariot create a show that, although consistently perplexing us at every turn, fully endears its audience to it?

The success of this production is scarcely analyzable into a few compound elements: Excellent actors deliver brilliant lines amidst enthralling sets, costumes, lights, sounds; no single one of these parts would be as great without the others to lift it up. And yet, each element comes together to create a seamless, moving piece that has an effect on its audience long outlasting its two hours onstage.

Take, for example, the opening scene. Molly Searcy’s character Sarah stands in a concave red cube in the center of a stage. She is also clothed head to toe in red, from her Katherine Hepburn-style headscarf to her classy high heels. The red of the box and the red of her clothes make the skin of her face, legs and arms, by contrast, a doll-like blue. Bright lights cast dramatic shadows behind her. She delivers a rather long monologue divulging the events of her post-college attempt to get a job and more or less accidental fall into the world of tarot.

The rapid-fire, witty and intelligent monologue leaves the audience in the dust, but Searcy is entirely caught up in the words of her character. Hers is but the first in a line of strong performances throughout the production. Her lines are but an introduction to the scarily good writing that powers the play till its end. And the alluring red box and its playful use of shadows are certainly not the last of the play’s intriguing visuals.

But the play isn’t all soliloquies. It’s chock full of the classic science-fiction thrills: electric zapping, time travel, blacked-out goggles, white lab coats, highly dangerous situations. Can we tell exactly why a given situation is so dangerous? Not really. But the actors’ expression of fear (or causation of it in others) infects us to such a degree that we too are terrified, even if we have no idea why. We just have to surrender ourselves to the world of science fiction.

But after the intermission, as we slowly begin to understand a little bit of what’s going on, we realize that we aren’t scared because of the science-fiction world of time travel, extremely powerful tarot cards and badass women fighting in high heels.

We’re scared because of how, after an hour and a half of building up a world of unreal nightmares, Red Chariot turns on its six-inch heels and lets us know exactly how close this dystopian story is to our own reality.

At the end of the day, it isn’t a story of tarot cards, murderous journalists, disappearing scientists — these plot points are mere red herrings. What’s really happening in this play is that humans are discovering a new and powerful technology and thrusting it into the world with no real understanding of the consequences. The new technology makes life easier and happier (maybe), and makes business moguls a lot of money (if it doesn’t kill them first). It’s analogous to countless products we’re surrounded by today.

Science fiction isn’t popular just because it’s cool or scary. It’s an enduring genre because of its metaphorical potential. The best kind of sci-fi story, Red Chariot saps this potential for all it's worth. Dahlquist often goes meta with the metaphors: the characters discuss the problems at hand by talking about plague, disease, frogs boiling in water. “Prophesies are metaphors, but metaphors aren’t science,” express a pair of scientists (Jovane Caamaño and Kristi Funk Dana). Nor is this play science. It’s a metaphor.

Red Chariot runs through Oct. 13 at Undermain Theatre, 3200 Main St. (Deep Ellum)
KEEP THE DALLAS OBSERVER FREE... Since we started the Dallas Observer, it has been defined as the free, independent voice of Dallas, and we'd like to keep it that way. With local media under siege, it's more important than ever for us to rally support behind funding our local journalism. You can help by participating in our "I Support" program, allowing us to keep offering readers access to our incisive coverage of local news, food and culture with no paywalls.
Make a one-time donation today for as little as $1.