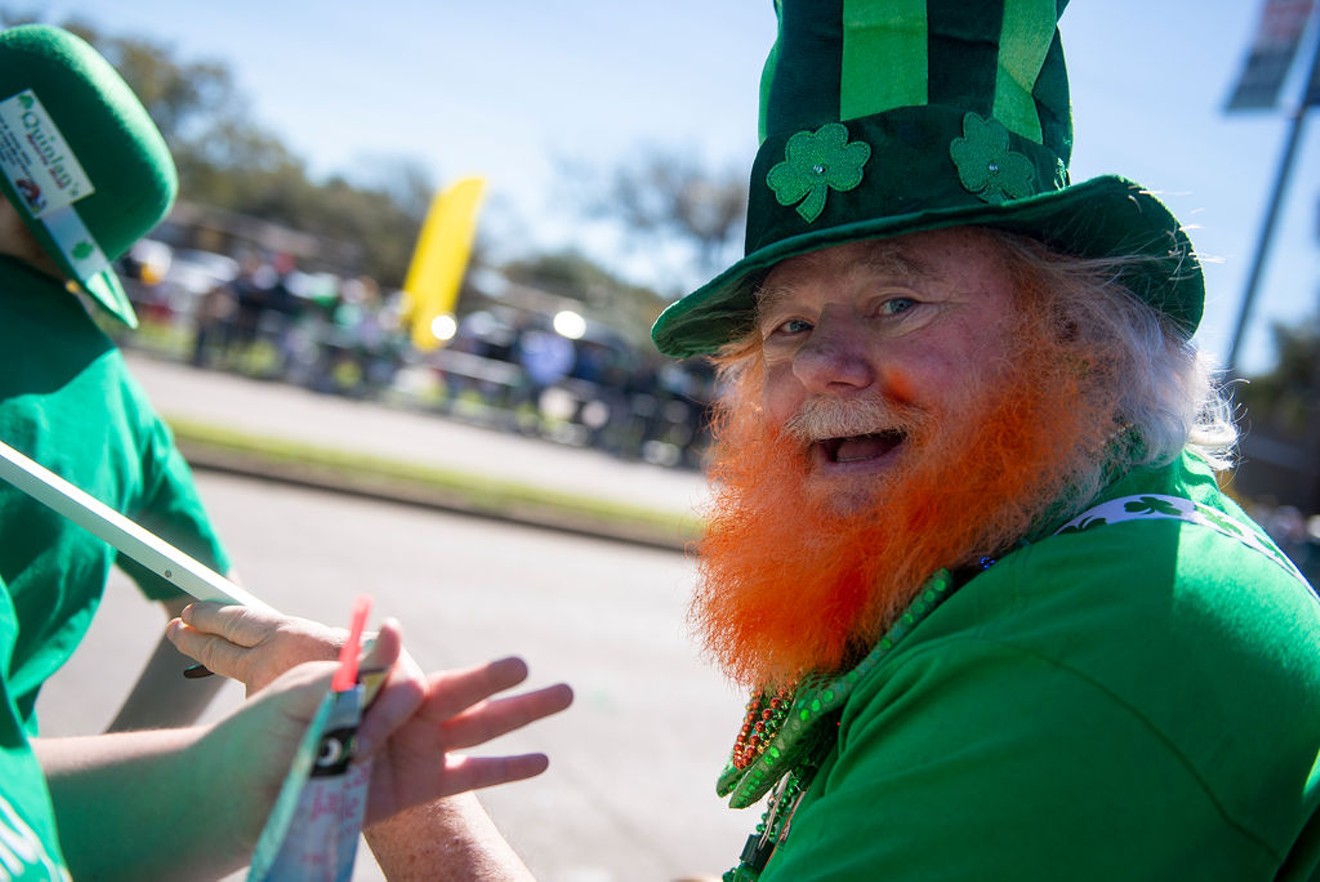 
10. The three most naively optimistic words you can utter on Greenville Avenue during St. Patrick’s Day Parade in Dallas: “Table for 12.” In 20 years of parades, I’ve been on the Observer float, the 105.3 The Fan float and even (in 2012) a co-grand marshal. But this Saturday I’m not the bead-hunted, but the bead hunter. For hours, we yell and flail and grab for toys thrown from floats, merrily grappling alongside 100,000 drunk, delirious Dallasites. But eventually, yeah, we get hungry.

Initially, it is just me and my wife, ALT 103.7 midday host Sybil Summers. Then the brother and his posse arrive. A friend of a friend recognizes us and gloms on. We adopt three fun, flirty baristas from the Rockwall Starbucks. Next thing you know, we’ve tricked ourselves into thinking a table for a dozen at Blue Goose — wait, on this day shouldn’t it be Green Goose? — is realistic. After a mere 90-minute wait, it is.

Behind alcohol, a Porta Potty and more alcohol, a chair placed conveniently next to food is an absolute life raft. Of course, since nothing on St. Patrick’s Day Parade occurs sans incident, during our breakfastlunchdinner there is a food fight and a mysterious “guest” with good looks and bad intentions. “Just promise me one thing,” the Raven-haired intruder says, grabbing my cheeks and pulling my face within two millimeters of her Jägermeister-infused breath. “Tell your daughter that you love her.” She then comes in hot, tongue-first. I don’t have a daughter. I do have a wife. Hard pass. As we leave the Green Goose, our last vision is of Raven sitting on our friend’s lap, passionately exchanging DNA. Dessert, anyone? Something tells me he isn’t thinking about his daughter. And, because it’s St. Patrick’s Day Parade in Dallas, Raven’s left nipple pops out, as if to stamp an exclamation mark on the day. It is 4:37 p.m.

9. One year it was Snoop Dogg performing in Energy Square. Another it was a topless club’s float adorned with a stripper pole and scantily clad “performers.” This year’s signature moment: Grand Marshal/Mayor Mike Rawlings cruising in a burgundy Mercedes convertible and … promptly getting dinged in the shoulder by a green tortilla. It is 11:32 a.m.

8. On its 40th birthday, the parade has clearly mellowed in middle age. Gone are floats featuring hot tubs and strippers, replaced by an assortment of bizarro. Inexplicably, there is a Boston College float. Also, Dallas cops dressed as superheroes, a cigar company with a smoking lizard, the Dallas Margarita Society and Twisted Root’s Chuck Norris theme. A guy randomly rides past on a unicycle, wearing a monkey mask. We reason that he is merely lost. There is a Shoebacca float that features a giant boot. For some reason, we take glee in pounding the un-manned centerpiece with marshmallows, beads and Jell-O shots. We are weird. But not as strange as Half Price Books, whose “float” is just a simple, red van. The parade’s odd couple is the back-to-back presentations by the Southeastern Conference and the Hare Krishna Community of Dallas. The latter, while singing and playing those little finger symbols, hands out Jolly Rancher candies. “We used to give out peanuts,” one of the members offers, “until we got complaints about peanut allergies.” A gluten-free parade? That’s nuts. It is 12:47 p.m. 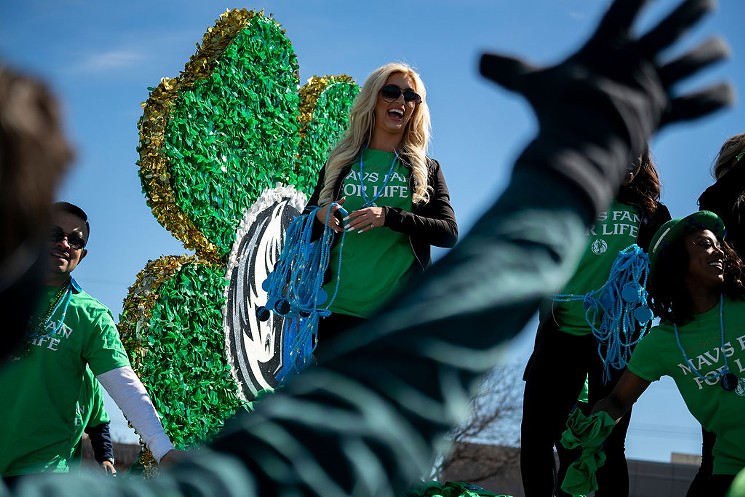 7. As always, there is romance in the air. Or at least unadulterated lust and extremely flexible morals. Don’t have any official record-keeping, but I’m guessing parade Saturday is Dallas’ highest-grossing hook-up day of the year. Everyone wears green. Everyone wears beer goggles. We’re all reduced to the lowest common denominator: Boy. Girl. Green. Gulp. Go at it. Girls flash their priceless tops for 5-cent beads. A guy does the same with his bottom. A couple gleefully exits a Porta Potty. I mean, no matter what occurred inside there it’s safe to file it under “gross.” There is the obligatory and random kissing and groping but also some creativity. A guy on a float locks eyes with a girl on a balcony. He scribbles his digits on a yellow stress ball and hurls his affection toward her … only to have it bounce off her hands. To be continued on Craigslist “Missed Connections.” It is 12:54 p.m.

6. Everyone wears some version of green, lest they be pinched by strange hands in unwelcomed places. Most straightforward shirt: “Fuck me, I’m Irish.” Most risqué: Dude wearing nothing but a Borat-style, lime green sling. Most random: Bill Russell’s No. 6 Boston Celtics jersey. The guy won 11 NBA championships, but of the 100,000 at this parade I’m guessing 3.7 percent recognized the true greatness being presented to them. It is 1:49 p.m.(ish). 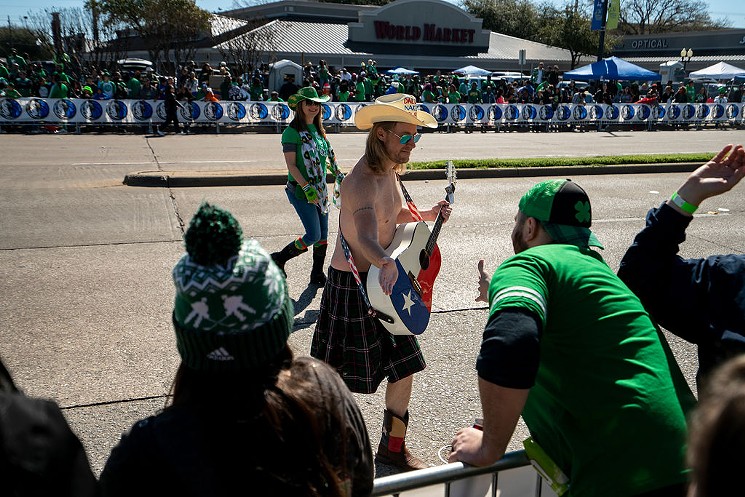 4. After the parade we transform into The Walking Dead, a massive throng of tens of thousands of dazed, saturated-bladder zombies meandering up Greenville, across Mockingbird and in the general direction of a “block party” offering, of course, more drink, music and perhaps food. Some stop to pee anywhere. A guy goes behind a stop sign which, in truth, doesn’t provide even a hint of “behind.” A woman drops trou in a restaurant alley. An entrepreneurial group charges $1 to use one of their three Porta Pottys. Within minutes, an alternative line — VIPee? — forms with people paying as much as $10 to circumvent the plebeian urination line. In our various states of inebriation, disorientation and urine emergencies, what should be a 10-minute walk detours into a 45-minute sojourn. Herding 12 of us in the same direction is impossible and, unlike the State Fair, there is no “just meet at Big Tex!” default. Eventually bottled-necked at the entrance to the block party, we’re reminded it costs $15 per person. I’m not real good at math — and, I’ll be honest, still a little buzzed post-party — but $15 multiplied by 50,000 is $750,000. You’d think with that kind of revenue we could fill a pothole or two along Greenville, no? It is 3:12 p.m. 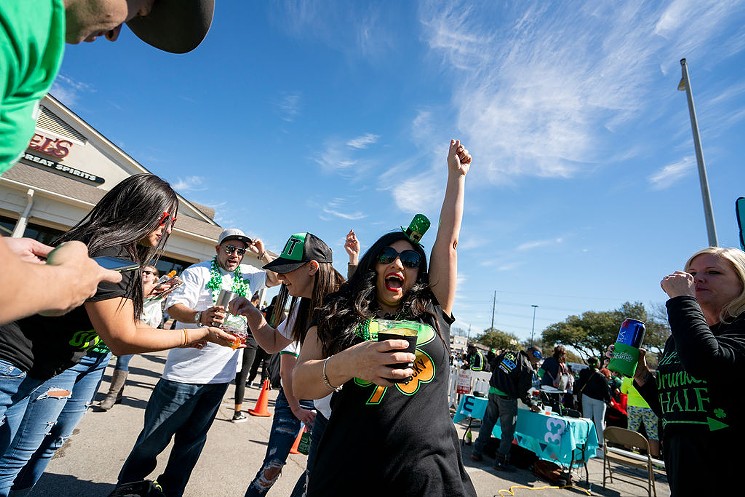 3. We have a tie for worst thing to bring to the parade: A baby(ies) in a stroller, one of those stupid motorized scooters and a lack of sunscreen. Though the high temp is only in the 50s, the sun proves giddy and several neophytes are leaving with a souvenir of the season’s first burn. And nothing says “fun” like not only navigating 100,000 people, but doing so pushing a stroller or doing it stopstartweavestopstartexcusemestopstartpickupandcarrydammit via a cumbersome and unpractical motorized vehicle. It is 10:36 a.m. 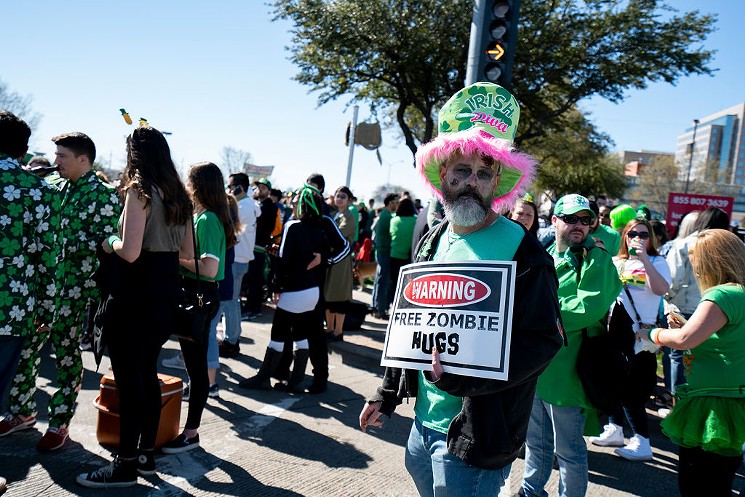 Looks real.
Brian Maschino
1. Warts be damned, the Greenville Avenue/St. Patrick’s Day Parade again confirmed why it’s still one of my favorite days in Dallas. Even turning 40, it motivates us to temporarily ditch our materialistic style for some raw, authentic substance. In a city consumed with what you drive and who you wear, the parade is about letting our hair down and exposing some grit and character. It’s the one day a year where you won’t get side-eyed if your shades of green don’t match. Dallas is only about 3 percent Irish, yet we throw the fourth largest parade in America. I can’t explain it, but I can certainly enjoy it. All those people from diverse cultures and all those forms of alcohol, yet Dallas Fire-Rescue said it treated only 27 patients (five of which were taken to local hospitals). The 2-mile, two-hour parade is more than the 100 floats, the 100,000 people and the enduring reminder that we’re all in this together. It’s a stark poke to not take anything for granted. First and foremost, easily accessible restrooms. See y’all next year?! It is 11:59 p.m.
KEEP THE DALLAS OBSERVER FREE... Since we started the Dallas Observer, it has been defined as the free, independent voice of Dallas, and we'd like to keep it that way. With local media under siege, it's more important than ever for us to rally support behind funding our local journalism. You can help by participating in our "I Support" program, allowing us to keep offering readers access to our incisive coverage of local news, food and culture with no paywalls.
Make a one-time donation today for as little as $1.
Richie Whitt
Contact: Richie Whitt