Jojo Regina, the 11-Year-Old Actress in Where The Crawdads Sing, Learns About Love, Hope and Boating 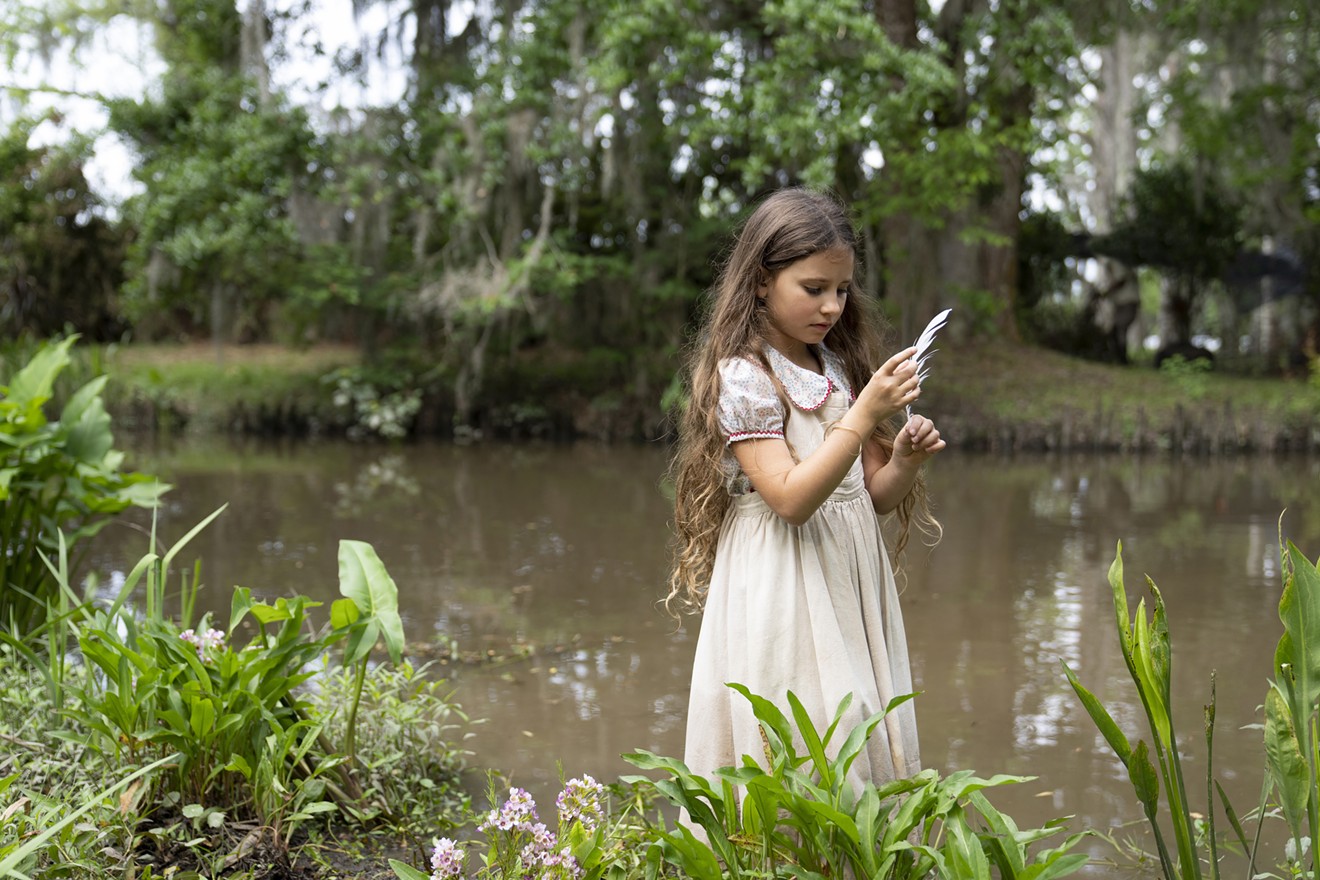 Houston actress Jojo Regina plays the young version of Kya, a girl left to fend for herself in a swamp, in Where the Crawdads Sing. Courtesy of Sony Pictures
Where The Crawdads Sing tells the story of Catherine “Kya” Clark (played as a young woman by Daisy Edgar-Jones), who raises herself in a North Carolina marsh after being abandoned by her parents and siblings. Based on a 2018 novel by Delia Owens, Crawdads’ film adaptation juxtaposes Kya’s childhood with the story of the murder of Chase Andrews, for which she is accused and taken to trial.

Houston native Jojo Regina plays a younger version of Kya, whose story is a driving force for the film’s plot. Days before the movie’s premiere, we caught up with the 11-year-old actress, who, at the time of the interview, was “counting down the days” until Crawdads hits theaters.

Regina landed the role with the help of her dad, who is also an actor. She walked in on him doing a voiceover audition one day and was immediately intrigued.

“I asked him, ‘What are you doing?” Regina says, and he said, ‘I'm doing an audition. And I was like, ‘Oh my gosh, I want to make funny voices too.’ So he let me try. We sent it in to his agent, and they liked it. And we got signed the next day.”

Regina says she has a lot in common with Kya, whom she describes as an “adventurous little girl.” They both like to run around barefoot. They both like playing outside, and they both love nature and animals. But getting accustomed to the outdoor setting was no easy task.

In several scenes, Kya gets around the marsh by sailing a small boat on a lake. According to Regina, the cast trained for two weeks to get those boat scenes just right.

“We shouldn't exclude people just because they're different, and we should remember that we can be our own heroes." – actress Jojo Regina

“First, I learned to drive a rigid inflatable boat with an instructor,” Regina says. “Then, I trained on Kya’s aluminum boat. That one was harder, but I learned to drive it and dock it all by myself before we started shooting. It was so much fun.”

Equally challenging was the North Carolina weather. On hot days, Regina would have an umbrella on set to provide shade, especially as she was boating in the hot sun. The weather was just as unpredictable as that of Texas, and “it was either flooding, raining, or extremely hot outside,” she says.

For the viewer, some scenes may be emotionally taxing, as we see Pa (Garret Dillahunt) and Ma (Ahna O’Reilly) argue before Ma, along with Kya’s siblings, leave the marsh, abandoning Kya and Pa, who eventually abandons her as well. While scenes like that may seem like a lot for a young actress to witness, Regina assures us there was never a moment when she felt afraid.

“I was in character for those scenes, so as Kya, I was scared,” Regina says. “I knew once Pa started hitting Ma, he didn’t stop until she was really hurt. As Jojo, I didn’t feel very scared about it though. I worked on that scene a lot with Chelsea [Bruland, the stunt head], Dillahunt, and Livi [director Olivia Newman]. They’re all the sweetest people in real life, and they all made sure I felt safe.”

Without proper guardianship, Kya is soon forced to fend for herself as she navigates getting groceries, collecting and identifying shells and feathers, and attending school. On her first day of school, Kya arrives wearing her mother’s old, tattered dress, covered in mud. According to Regina, this particular scene took the longest in terms of make-up and costume prep. “My feet and hands had to have just the right amount of dirt and mud,” she explains.

Regina is grateful to have worked alongside Newman and Reese Witherspoon, who produced the film through her Hello Sunshine production company, as well as with several other inspiring women. Although Crawdads has only recently had its premiere, the young actress has already booked her next role. She can't tell us a lot about it, only that it's a lead role in a drama.

“I learned that love is something we all need,” Regina says. “We shouldn't exclude people just because they're different, and we should remember that we can be our own heroes. There's a little, tiny seed of hope in every one of us.”
KEEP THE DALLAS OBSERVER FREE... Since we started the Dallas Observer, it has been defined as the free, independent voice of Dallas, and we'd like to keep it that way. With local media under siege, it's more important than ever for us to rally support behind funding our local journalism. You can help by participating in our "I Support" program, allowing us to keep offering readers access to our incisive coverage of local news, food and culture with no paywalls.
Make a one-time donation today for as little as $1.