Located on a corner of the historic square in Denton, Dark Age Tattoo offers customers more than a simple tattoo. The artists tattoo true art. Tattoo artist Rember Orellana opened the shop in 2014 after serving a three-year stint at Cat Tattoo in Dallas. Now he's world renowned for his complex work, appearing in several tattoo magazines. The shop consistently receives five stars from its customers, praising the artists for their ability to walk customers through the tattoo process, as well as offer great attitudes and professionalism when it comes to their art. Originality is the most important part of what he does at his shop, Orellana says. "There are so many great artists that do realism really clean and really straight, but what makes the difference is when you have style."

Named in honor of Elvis Presley, Shake Rag Music offers not only a huge selection of vinyl but also guitars of all shapes and sizes from a Fender that looks like something Stevie Ray Vaughan would play to a bass that resembles Beatle Paul McCartney's bass but with psychedelic designs. Owner John Gasperik, who spent his years as a photographer at Mother Blues, opened the shop in the early 2000s near Lower Greenville, showcasing not only his collection of guitars and vinyl but also extensive rock 'n' roll memorabilia. "When Elvis was a little boy, his father got thrown in jail, so they had to move to the poorer part of town across the railroad tracks, which was called 'Shake Rag,'" Gasperik once told a reporter. "That was when Elvis first heard the blues and gospel music. I figure that's the birthplace of rock 'n' roll, so I thought it was an accurate name for the store."

There are those of you out there who enjoy a rare blueberry soda or peanut and jelly flavored beverage. Adventurous drinkers and Texas transplants who crave regional specialties can get their fix at Rocket Fizz, an eminently explorable shop in Deep Ellum. The 1,500-square-foot store, the third of its kind but the only one in Dallas, showcases hundreds of kinds of soda and an equally vast array of candy. Vintage signs and oddball tchotchkes can encourage loitering and impulse buys. But the soda selection is really the main attraction. Where else can one buy a bottle of Martian Poop marionberry flavored soda? And what the hell is a marionberry?

Supporting the Dallas skate scene since 2004, the Rec Shop prides itself on being a mom-and-pop skateboard shop offering skateboard supplies at affordable prices. Both longboards and old school boards can be found at its Lower Greenville location. The shop doesn't just specialize in skating supplies but also offers graffiti art supply from brands such as Montana, Alien, Ironlak and Sabotaz. It's one of the few shops in the U.S. to carry these spray-paint brands under the same roof. If your graffiti and skateboard loving self isn't tantalized enough to check out this place, keep in mind Rec Shop also carries 12-inch vinyls to support "all real DJs" with a selection that covers hip-hop, drum 'n' bass, house and break beats.

The vaping craze is still going strong at Wizard's Vapor Bar and Smoke Shop where new products arrive on a daily basis. Juices, tanks, chargers and dozens of brands of e-cigs — Wizard's sells just about everything a person needs to enjoy a vaping experience at a reasonable price. It also offers a large space for customers to vape together and a knowledgeable staff willing to explain how vaping works. Oh, and Wizards also provides adequate parking for customers.

There are plenty of great comic book shops in the Dallas area, but Red Pegasus Games and Comics has a special aura about it. Housed in Oak Cliff next to the Bishop Arts area, it's a welcoming place for longtime and new comic book readers. They regularly have artist and writer networking meet-ups. Co-owners Gabriel Mendez and Kenneth Denson are friendly to every person who walks in the door. It's a simple concept, but actually giving a crap about your customers goes a long way. It's the kind of place you want to keep coming back to. In only a couple of years, it has been a major positive for Oak Cliff, filling a much-needed demand for those who live south of I-30.

Looking to satisfy your superhero or graphic novel fix until the next Marvel or DC blockbuster hits the movie houses? Then look no further than Freaks and Geeks in Denton. In their shop in a small three-bedroom house, co-owners Alec Featherstone and Beth Baalman offer a collection of more than 35,000 comic books to surf, 15,000 video games and more than 1,000 toys to please even the most snobbish collector. Comic prices depend on the book's rarity but range anywhere from a couple of bucks to more than $1,000. "Our biggest dream with opening this up was to make it a place where people felt comfortable coming and staying for a while," Featherstone told the local newspaper when the shop opened in January 2015.

Located on 2.5 acres, Strokers has been repairing some of the meanest, baddest bikes in Dallas and Fort Worth for 30 years. It's a place where a biker can grab a bite to eat, cool off with a cold brew or listen to live music while their bike is being serviced. On any given weekend, more than 500 bikes will pass through Stroker's doors. Owner Rick Fairless opened the shop not long after retiring as the top sales rep for the Glidden Paint Co. and never looked back. "I can truly say that I am the luckiest boy in the world," he says. "I am living my dream every day."

Operating a well-done tobacco store depends on subtle cues. These days, stores can double as vape stores, head shops or small-scale bars. But Cigar Art, located in Bishop Arts District, does all the little things right. The lounge in front is plush but not ostentatious, the humidor is large but not intimidating, and the staff is knowledgeable without being douchey. A good tobacco store encourages people to stick around and smoke, and this BYOB spot is surprisingly roomy and comfortable. People actually lounge in this lounge. The place has a great selection and some real cred — cigar makers rolling product in the store have a minimum of 12 years experience in a Cuban factory. 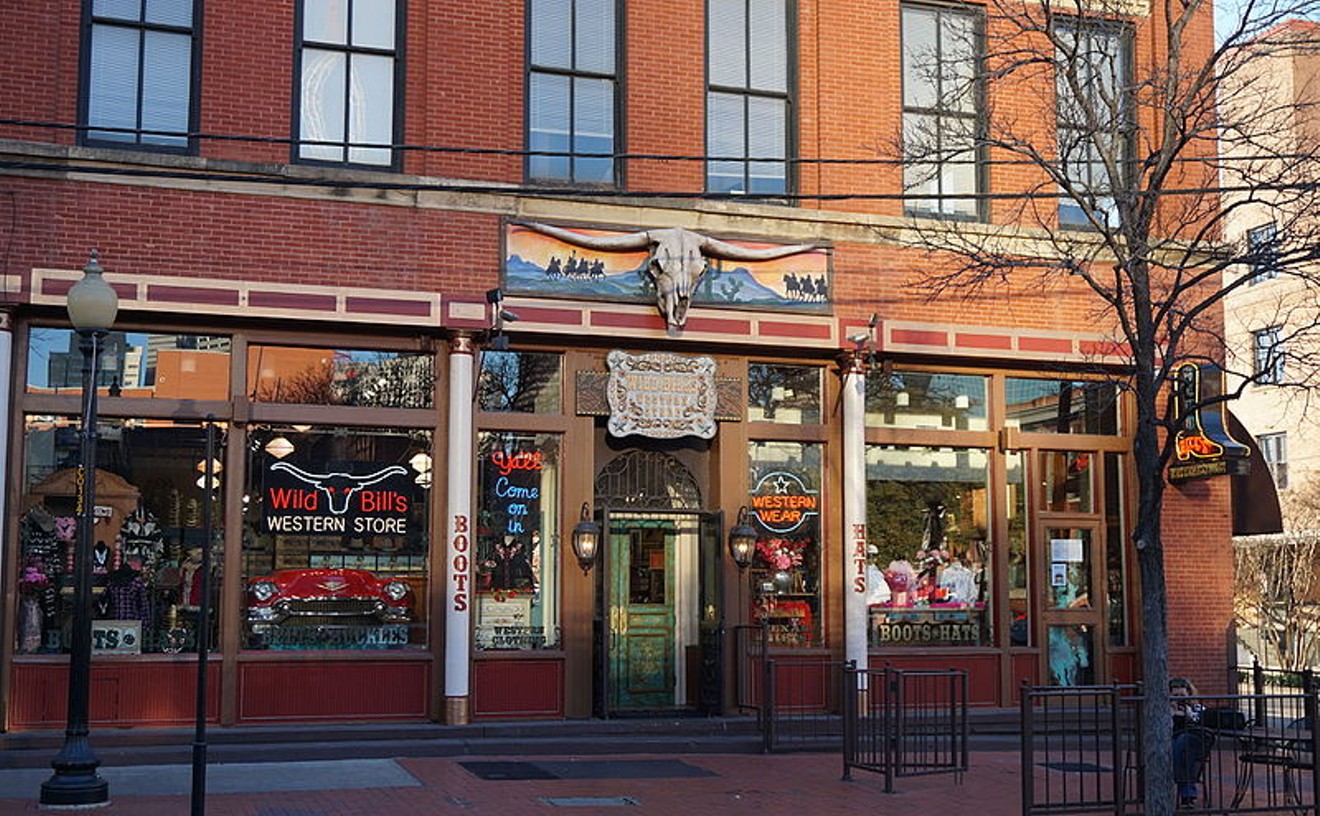 Just a few blocks from the book depository where Lee Harvey Oswald shot JFK, Wild Bill's Western Store offers a selection of saddles, boots and belts in the historic West End of downtown Dallas. It's a place that once catered to actors from the old TV show Dallas and rock stars such as Mick Jagger, Elton John and Eric Clapton. Wild Bill's boot selection is impressive, from freshwater Hornback alligator boots to diamondback rattlesnake and hippopotamus skinned ones, too. Some boots showcase designs of guitars and others crosses. From hand-tooled Indian skulls to tooled snake and roses, all different types of custom-made boots are available. Moccasins, too. Wild Bill's is the best and one of the oldest boot shops this side of the Trinity.