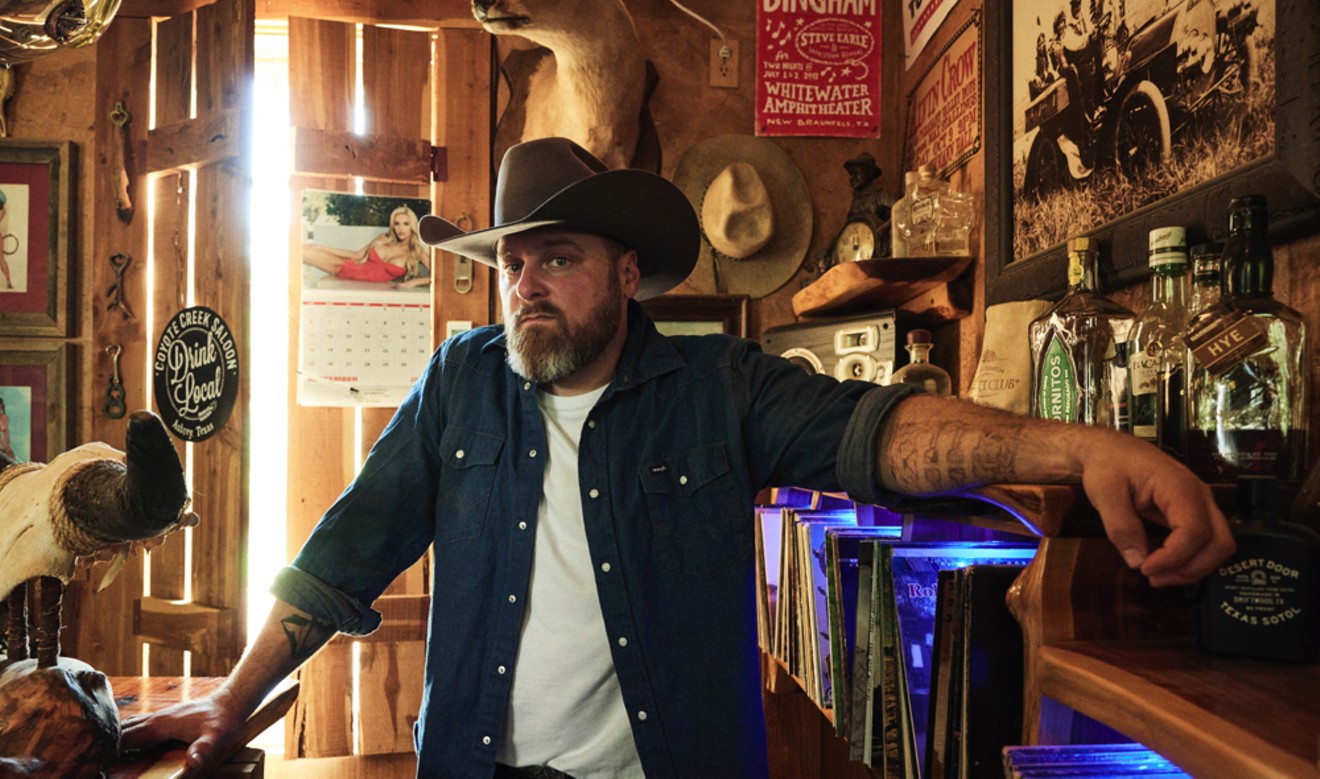 You never know who's watching. Isaac Hoskins was playing his usual Fort Worth gig when fate brought in a new friend who would change his life. Peter Salisbury
Isaac Hoskins knew the gentleman in the crowd was important. Standing onstage at the Magnolia Motor Lounge in Fort Worth, Hoskins was playing another opening slot at a Friday night gig, just as he’d done for nearly two decades now.

But it wasn’t any old patron watching him on this Friday night in late October 2019. Yellowstone creator Taylor Sheridan had walked into the bar.

Only it was the wrong bar, Hoskins recalls. Sheridan and his actress/model wife, Nicole Muirbrook, had gotten lost in their search for a bar where they were meeting a few people. Then they heard Hoskins onstage and stayed for the show.

Hoskins’ music draws from his roots, which stretch back to Northern Oklahoma and run through his working-class background. With stints as a bartender, beer-truck driver, construction worker and ranch hand, Hoskins’ resume sounds like a country song at last call. His background echoes through his music and resonates with his fans. The singer's latest album, Bender, touches upon these working-class roots and tackles a darkness that had followed him for several years and, during the pandemic, into Utah’s Bryce Canyon National Park, where he discovered a short stint with sobriety.

“I like a lot of different types of music,” Hoskins says. “Ultimately, the biggest contribution I had to offer to the art, I think, is my willingness to be vulnerable and genuine. That is where I came from and my family comes from. It’s a natural thing.”

After his set at the Magnolia Motor Lounge, Hoskins had a drink with Sheridan, but still wasn’t quite sure who he was. So he stepped outside for a cigarette and Googled him. With Sons of Anarchy, Tulsa King and the Yellowstone dynasties — not to mention 2016’s Hell or Highwater — Sheridan’s list of accomplishments and accolades is longer than George Strait’s greatest hits set list.

When he walked back into the bar, Hoskins did his best to hide his surprise. Sheridan looked at him and smiled. “You Googled me, didn’t you?”

They laughed, talked, had a few drinks and formed a friendship. A few years later, Hoskins would land in Montana on the set of Yellowstone for an appearance in the show's fifth season currently playing on the Paramount Network.

For his appearance, Hoskins played “Off the Wagon,” a song from his latest album, during a bar-fight scene between Beth Dutton, the take-no-prisoners daughter of Kevin Costner’s "Cowboy Godfather"-turned-governor character and a cowgirl who had crossed the line when she threatened to take Beth’s husband, the grizzled Rip Wheeler, home for a saddle ride.

“I’ve been doing this for a long time,” Hoskins says. “I’m 40, man, and still playing opening slots on the patio. Somebody with that kind of sway put me in his show. It lights a fire under you.”

The first fire was lit under Hoskins when he was a child. His cousin played guitar and inspired him to learn how to play it too. Born in northern Oklahoma but raised in southern Kansas, Hoskins picked up a book of chords and became a self-taught musician in a place where a career in agriculture or education awaited after high school.

In Hoskins’ case, he decided to become a teacher.

A short stint at Wichita State University ended after a high-school friend was killed in a car accident. Hoskins says that's when he realized he needed to spend his life pursuing the dream of becoming a Texas songwriter instead of the one forced upon him by circumstance.

So he packed his bags and headed to Austin to follow in the footsteps of Jack Ingram, Guy Clark and Robert Earl Keen and tell stories with his music. In 2009, he released his first album, Half Empty, followed by Sell the Farm in 2020. He calls his style of music “highbrow honky-tonk.”

“It took me coming here to figure out how much work it takes,” Hoskins says. “There are so many people in this state who do it well. It was a bit of a rude awakening.”

The COVID pandemic in 2020 was another rude awakening, but also a serendipitous one.

Like other Texas musicians, Hoskins watched as his livelihood ground to a halt when live venues had to close and then reopened to limited capacity when the shutdowns were lifted a few months later. He’d been playing at local places such as Dan’s Silverleaf in Denton, where he says he also worked as a manager for about 12 years.

That 2019 chance meeting with Sheridan would become a lifeline for the hard-working musician. He’s since performed several gigs for Sheridan at events such as charity auctions, horse shows and rodeos.

A few months after the pandemic erupted, he was playing a gig for Sheridan at a horse-reining competition in Las Vegas when Hoskins headed into the desert for three days of solitude in Utah’s Bryce Canyon National Park. He’d find inspiration to get mostly sober, to lose weight and to pour all of his effort into performing full-time to earn a living and achieve that Nashville dream that many discover in Texas.

He channeled those struggles during that dark time into his latest album, Bender, in songs such as “Harder Than the Blues,” about all-night benders and the hangovers that often follow. Several songs stand out on the new album, including “Panhandle Wind,” a Radney Foster-style song inspired by rural northwest Oklahoma where his mother lives, and “Leon’s Blues,” a song inspired, in part, by a paper grave marker at the Dallas cemetery where Texas guitar legend Stevie Ray Vaughan is buried.

“I’m 40, man, and still playing opening slots on the patio. Somebody with that kind of sway put me in his show. It lights a fire under you.” – Isaac Hoskins


Hoskins calls Bender “an ode to unhealthy coping strategies and life on the other side.”

Two years later, Hoskins was on the set of Yellowstone in early July and seeing life on the other side of a Hollywood production. He’d met a few of the Yellowstone cast and crew at Sheridan's private parties, but being on set was much different. He had pre-recorded the song prior to arriving on set and spent about 14 hours shooting the scene in a bar, which the crew had re-created to look like one that he says exists in Bozeman, Montana.

The crew shot the scene of him playing onstage from several different angles, including with the camera straight at him, behind him and from each side of the room. Whenever the crew was filming, they would play the audio of the song Hoskins had recorded so that everyone could dance and be in time with one another. During the dialogue parts of the scene, Hoskins says he had a tiny earpiece that allowed him to hear the audio recording of his song so he could act and strum the guitar in time with the song.

Hoskins has plenty of stories to share from his brief experience on set. But the one that stood out involved meeting English actress Kelly Reilly, who plays Beth Dutton. He recalled that she was from London, and he was struck by her "English" accent since she speaks with an American one in the show.

“She commented on my handshake and how strong it was,” Hoskins says. “‘That’s quite a handshake, luv.’ It was pretty wild.”

Hoskins isn’t the only country singer to make an appearance on this season of Yellowstone. CMA Best New Artist and Female Vocalist of the Year Lainey Wilson has a recurring part this season as the love interest of one of Dutton’s ranch hands.

Hoskins says meeting down-to-earth people such as Wilson and Reilly was pretty cool and led to many memorable moments. He calls Yellowstone’s Christina Voros an incredible director and says being able to watch her work was one of the great moments from the whole experience.

“She knows what she wants and how to get it out of the actors,” Hoskins says.

The Yellowstone experience lit another fire under Hoskins, who says he wouldn’t mind being involved in more acting gigs. He considers it a viable endeavor.

But none of it would have happened without that chance encounter with Sheridan at the Magnolia Motor Lounge, a place known as a destination for Texas Christian University students and people visiting the Fort Worth Zoo.

The problem is, you never know when those chance encounters can happen.

“You never do,” Hoskins says. “I’m living proof.”
KEEP THE DALLAS OBSERVER FREE... Since we started the Dallas Observer, it has been defined as the free, independent voice of Dallas, and we'd like to keep it that way. With local media under siege, it's more important than ever for us to rally support behind funding our local journalism. You can help by participating in our "I Support" program, allowing us to keep offering readers access to our incisive coverage of local news, food and culture with no paywalls.
Make a one-time donation today for as little as $1.