Erica Banks fans were divided after she was heard in a leaked video describing the way she wants her entourage to look. Ron J. Photography
A private Instagram Live video surfaced on social media Monday morning with platinum-selling recording artist Erica Banks sharing her preference for the type of “look” among her entourage when going to nightclubs.

“She ain’t a certain type of ‘look,’” Banks said, using air quotes for the last word, at the start of the 44-second viral clip. “If she don’t look how I want her to look, physically, I don’t want her to go because the look of everything is so important to me. Like, If she ain’t thick enough, nope. Hair not did good enough, nope. Can’t dress, nope. Skinny, nope."

With a smirk, the rapper continued: "And it’s like I don’t feel like I’m discriminating. I just want a certain type of look. She could be the sweetest girl I ever met in my life  … But if she don’t look 'the part,' [air quotes] I don’t want her to come. That’s just not the vibe I’m on. Now she can come to the cookout. She can come to a listening party. But the club, I feel like a bitch gotta look a certain way to come.”

The DeSoto native's remarks were met with mixed responses on social media. While some fans cosigned the "Flow Queen’s" sentiments, the majority served up harsh criticism, in some instances using past photos of Banks’ own nightclub attire.

One fan tweeted: “But before you became a rapper with money and your body done who tf were you before? Better humble ya self love.”

“I was still Erica Banks, dumb bitch. A BBL doesn’t solidify who I am & I can hangout with who I choose,” the rapper responded.

Another fan tweeted, “@realericabanks not even attractive enough to be saying this out loud. Just got bullied into getting a BBL. Stop it.”

It didn’t stop, either. Hundreds of users tweeted and piled on the harsh commentary. The conversation largely centered on Banks' apparent confession of getting a BBL (Brazilian butt-lift) surgery.

“Nobody wanna go clubbing with you anyways, imagine being friends with someone who’s shallow,” tweeted @imstilljenniftb.

@Slickkay__ tweeted, “That’s because she don’t love herself enough. Very ironic to require a “look” she naturally doesn’t even have herself.”

“Somebody must’ve yelled “get that SpongeBob body btch out my section” at her before she got her bbl,” tweeted @teighxteigh.

Banks, who signed to Warner Records in 2021 following the success of her breakout single “Buss It,” responded to fans on Instagram and Twitter about her original opinions on Monday, questioning the loyalty among her friends who leaked the clip, addressing her cosmetic history and the judgement she received on social media.

At 4:21 a.m., Banks addressed the backlash by tweeting, “Everybody’s entitled to their own opinion & I’ve never been one to convince people of liking mine. My preference of who I club with when it comes to my brand has nothing to do with y’all. Y’all never liked me anyway so why would I care about what y’all think about anything I say?”

She also responded to fans’ questions about her tweet while reposting supporters’ comments on her Instagram Stories. “I ain’t sced of dem. YA’LL MAD, THEY MAD,” she captioned with a woozy emoji with a clip of herself sitting in the back of a vehicle.

“Let’s talk about whoever sat there and screen recorded it and sent it to a blog. That’s big weird. Cause that’s what’s really pissin me TF off,” Banks wrote about the leaked video on a reposted fan Story that supported the rapper.

While Banks fended off the mountain of criticism, she also received aid from an army of supporters approving her freedom to choose who joins her on a night out. 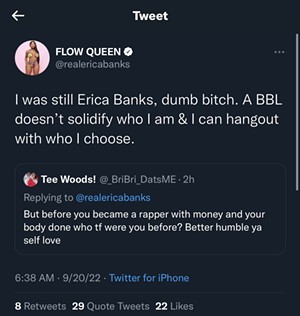 Erica Banks argued with fans on Tuesday and Wednesday after a video was leaked online.
Screenshot from Twitter

“How y’all mad?? Cause it’s true,” one Twitter user said in the comments for blog The Shade Room. “Nobody wants to be out at no club with people or a person who don’t look good. This requirement y’all need to have for your friends cause if she only attract bummy guys cause of how she looks why you want that at your section?”

“Freedom of association she has the right just like every other American,” said another user.

On Twitter, Banks ended the discussion with one final statement. For now.

“Lastly, I love my skinny/smaller women with a passion. Let’s not get it misconstrued. However, when I go to the CLUB, I want thick bitches shakin ass everywhere! That’s my vibe. There are even skinny women in my music videos, most hand picked by me, so stop it.”

Then, Banks ended the back and forth on Instagram by thanking the friends who she said understood what she meant by her opinion in the viral clip.

“I appreciate the support from my friends. Ya’ll know me & ya’ll know what I meant. Thank ya’ll for being adults,” shared Banks in an Instagram Story.

The rapper did not return our request for comment.

At the 74th Emmy Awards this week, Kenan Thompson made a joke about Best Lead Actress winner Zendaya, saying, “Zendaya just turned 26. Twenty-six is a weird age in Hollywood: young enough to play a high school student, but too old to date Leonardo DiCaprio.”

Erica Banks hosted an official mixtape release party on Monday night at Heart in Houston for her newly released project, Class in Session. The DJ Scream-hosted release is presented by Live Mixtapes and 1501 Certified and features guest appearances by T-Pain, Big Boogie and Yung Smoody. As far as we know, none of them have a BBL.
KEEP THE DALLAS OBSERVER FREE... Since we started the Dallas Observer, it has been defined as the free, independent voice of Dallas, and we'd like to keep it that way. With local media under siege, it's more important than ever for us to rally support behind funding our local journalism. You can help by participating in our "I Support" program, allowing us to keep offering readers access to our incisive coverage of local news, food and culture with no paywalls.
Make a one-time donation today for as little as $1.