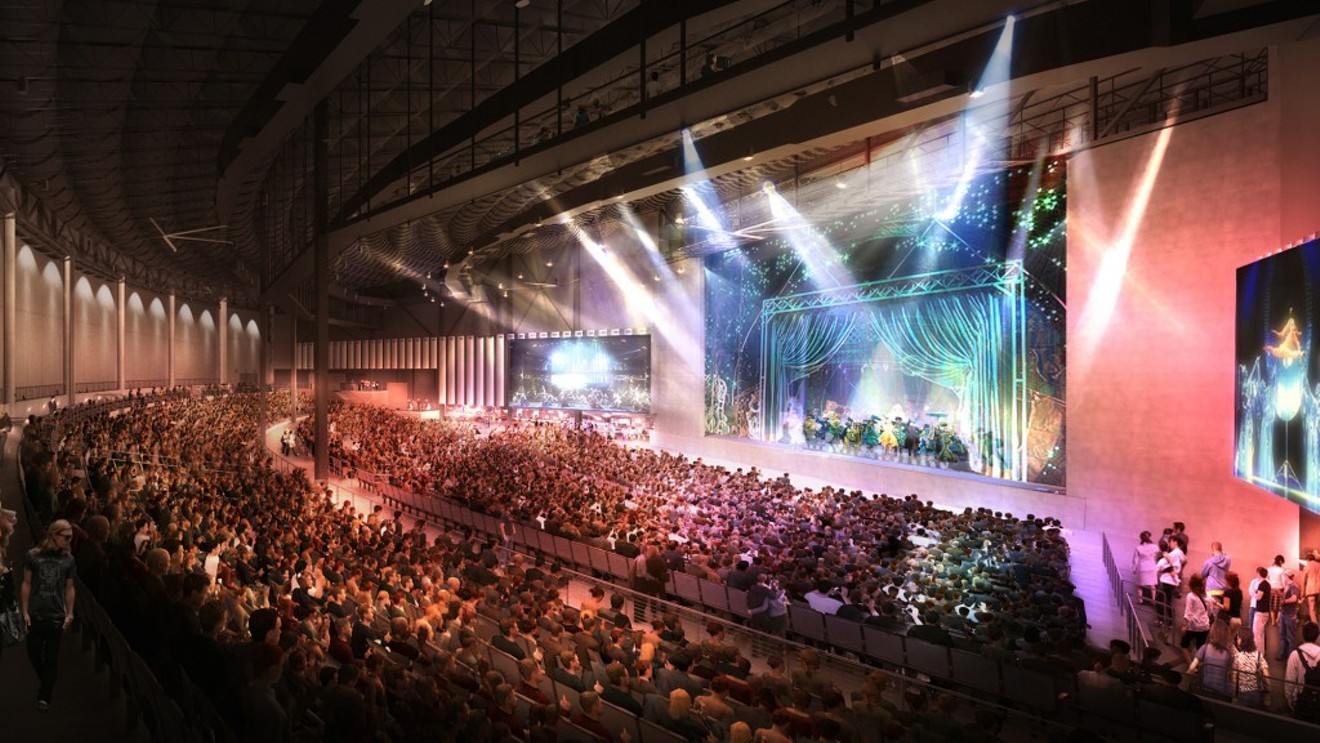 The Pavilion at Irving Music Factory will have a seating capacity of 8,000 and be able to transform from an indoor to an outdoor venue. courtesy Irving Music Factory
This weekend, Irving's new crown jewel, the 17-block Irving Music Factory, was set to open its music venue with an A-list lineup of shows by Dave Chapelle, Larry the Cable Guy, Jeff Foxworthy, Brad Paisley, Lifehouse, Switchfoot and Goo Goo Dolls.

But yesterday, Live Nation, which books the Pavilion at Irving Music Factory, announced that all of those performances were rescheduled, canceled, or moved to other venues. Jeff & Larry's Backyard BBQ, scheduled for Sunday evening, was the first to be canceled Tuesday afternoon. The reason, the venue said, is Hurricane Harvey.


"I'd like to come back as soon as possible. I heard it's going to be a great venue." – Brad Paisley

"In the interest of safety, the Houston and Dallas dates for Jeff & Larry’s Backyard BBQ featuring Jeff Foxworthy and Larry the Cable Guy have been canceled," a Facebook post by the Pavilion at Irving Music Factory read. "Refunds are available at point of purchase. We are thinking of those affected by Hurricane Harvey."

Yesterday morning, Live Nation released a statement that the whole weekend of performances was off because of setbacks with the construction timeline.

"Due to construction delays in completing portions of the development on time and the assessment of the present status of the project, Live Nation has been forced to delay the opening of the Pavilion until Saturday, September 9," Live Nation's statement read. "It is with regret that we apologize to our patrons; however it is important that we deliver a first-class venue experience. We look forward to opening September 9, 2017, with a performance by ZZ Top."

Noah Lazes, president of the ARK Group, which is developing the project, says "a significant amount of rain in August" was partly to blame for setting back the project, but Hurricane Harvey was not a factor in the decision to delay opening weekend a week.


"That one [Jeff & Larry's Backyard BBQ] had nothing to do with this," Lazes said. "That was related to hurricane." He said the hurricane didn't help the venue's construction delays, "but I don't believe that to be the primary reason. We're not blaming it on the hurricane. We want to make sure the venue's perfect."

Lazes said the readiness of the lawn was a major concern.

"Dave Chappelle is a very dressy show. They'll be dressing their best for an evening out. God forbid they come and the lawn hasn't rooted yet and it will be muddy," he said.

While the venue could have opened legally, Lazes said, when organizers realized they had the ability to move the dates for Dave Chappelle — the star of the opening lineup — they opted to push all of the opening festivities.

"Irving has waited more than 10 years on this project. Another week's not going to kill anybody." – Noah Lazes, president of the ARK Group


"Dave Chapelle was willing to move his dates to 60 days from now," Lazes said. "That helped us make a decision that we should hold off a week and open next Saturday as opposed to this weekend. It took some pressure off to be able to move. We want the experience to be right."

Chappelle's will perform Oct. 26-27. The venue will honor tickets for the earlier dates.

But not all of the shows will be able to take place at Irving Music Factory at a later date. Lifehouse and Switchfoot's Monday show has been moved to South Side Ballroom, and Goo Goo Dolls have moved their Wednesday gig to Starplex Pavilion. Like the Backyard BBQ, Brad Paisley's show, scheduled for Saturday, has been canceled.

"I'm super bummed, too. The building wasn't ready. My people are making plans, and we'll figure something out for the future," Paisley told the Observer via text message while he was traveling by plane. "Certainly with all that's happening this week, there's a lot to consider about how to make this up in a meaningful way."

"I'd like to come back as soon as possible," he continued. "I heard it's going to be a great venue."

As we reported in May, The Pavilion will be unique for its flexible seating and airplane hangar-style construction. With the opening and closing of a door, the venue will be able to change from an 8,000-seat amphitheater to an indoor arena, event hall, intimate theater, standing-room-only rock venue and more. 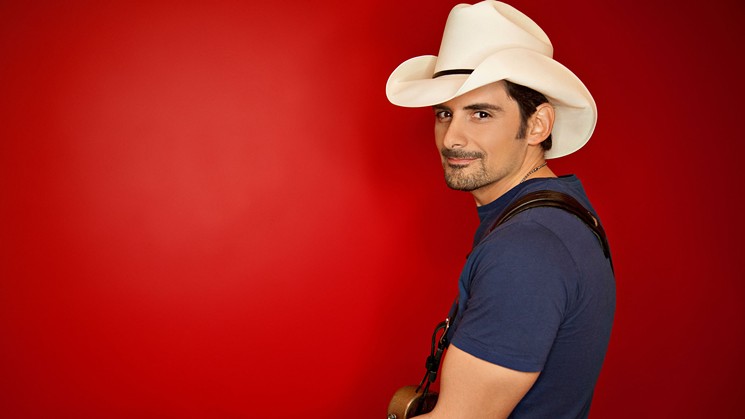 Brad Paisley's show, set for Saturday, was canceled. He said he hopes to reschedule soon.
Ticketmaster
The larger Irving Music Factory complex, of which the Pavilion is the centerpiece, will take up 17 city blocks and include 20 bars, restaurants and clubs; an eight-screen Alamo Drafthouse Cinema; and a 100-square-foot office building.

Lazes said that while plans for the first week of operation were shaken up at the last minute, the rest of the Pavilion's programming should proceed without a hitch.

"I think we have like 45 shows in the next 90 days — in that range. So we've got plenty of content," he said. "It ranges from Kidz Bop to Kiss to Hillary and Bill Clinton."

And he's confident that people will be happy with what they find when they walk through the doors for the first time.

"It's a spectacular venue — world class," he said. "It's being termed as the best concert venue of its size in the country, if not the world.

"Irving has waited more than 10 years on this project. Another week's not going to kill anybody."