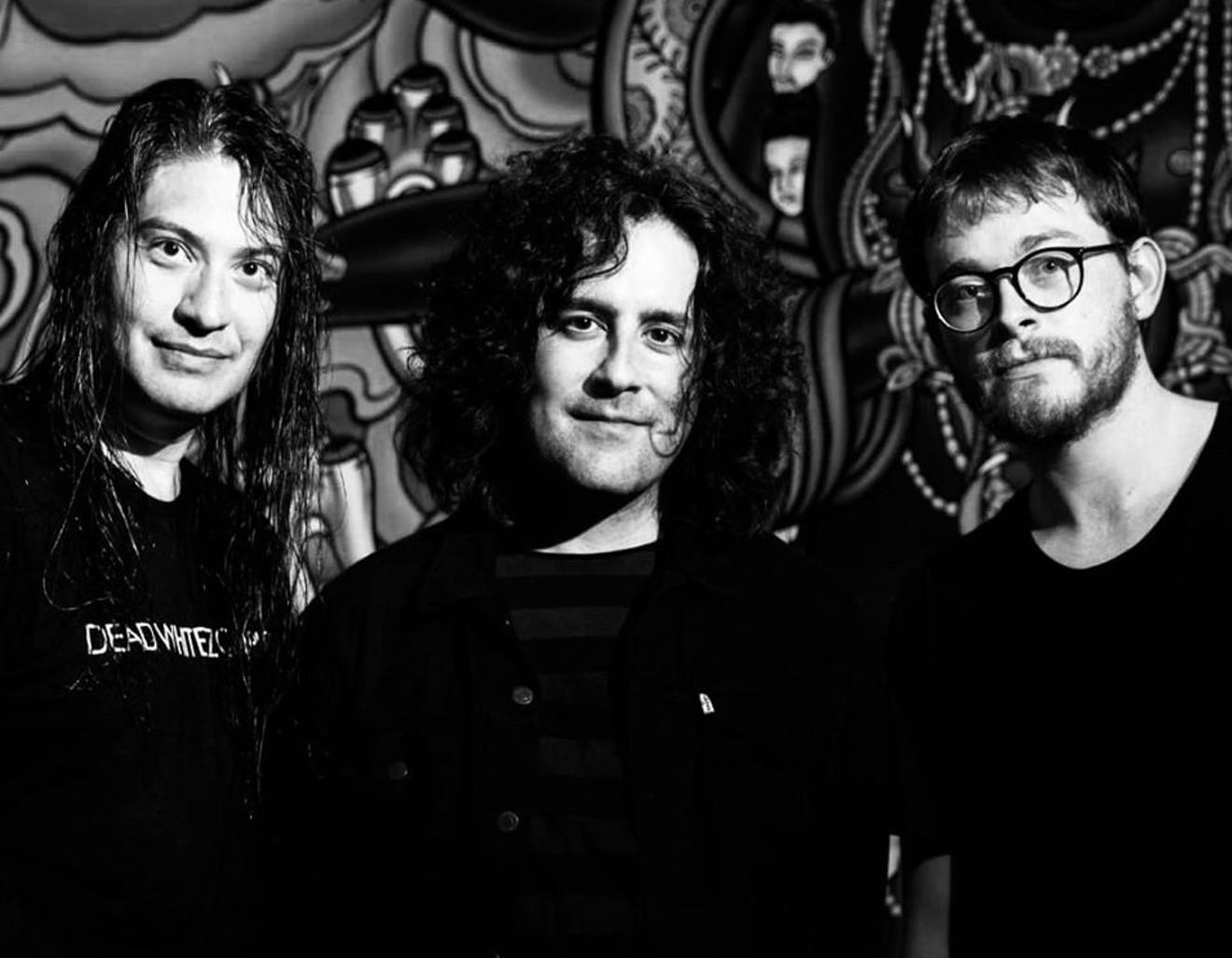 Scott Tucker (middle, with band members Vincent Martin and Braxton Fugate) longs for the '90s with his new band's latest release. Savannah Butler
Once upon a time, Scott Tucker fronted the well-known local band The Orange, but after seeing that project fall apart in the office of a major record label, he is back with a new project, Aztec Milk Temple, and a brand new song, "Digital Natives."

"All those stories that people say, the horror stories you hear about major labels trying to change a band's music and their image is 100 percent correct," Tucker says. "We were a local band headlining Granada Theater bringing 300 people a show. That changed the dynamic for all of us, and we all just kind of went our separate ways, amicably. With this new band, Aztec Milk Temple, I'm not really shooting for anything like that."

With a band name referencing the sacrificial offerings people have made since ancient civilizations to find balance in their lives, Tucker wanted this new band's lyrical content to explore, question and challenge his life experiences from both an insider and outsider perspective.

With the creative freedom offered by Idol Records, where the band just signed, Tucker wanted the band's first single to reflect both the good and the bad of the technological world he has grown with over the last 37 years.

"In the '90s, we weren't exposed to as much information as kids are today. Like, there was this Wizard of Oz thing where things were behind the curtain, so to speak. We didn't see the wizard. We saw the magic show." – Scott Tucker


"The lyrics were basically watching the world change so dramatically from the time I grew up — for better and worse," Tucker says. "A lot of of people from my generation have a hard time adapting to this this new code that exists in the world now."

With a sound reminiscent of the rock sounds of the late '90s and early '00s, when rock was still trying to figure out where it was going in the wake of grunge, "Digital Natives" questions our digital dependence, declaring "I don't want to be a slave to the here, the new, the now."

"I mean, even right now with everything that's going on in the world, people just blindly follow," Tucker says, referencing the massive amounts of misinformation shared across social media platforms. "I can't sit here and be hypocritical about it because if I see a headline that's just insane I immediately have a reaction to it."

For Tucker, what is really lost — especially when we "let computers raise the kids" — in the digital age is the feeling of innocence he felt as a child growing up in the '90s.

Kids still do that today, but Tucker believes something is missing in terms of inspiring kids to think outside of the world we know.

"I think what we lost is a certain degree of wonderment," Tucker says. "I think the difference is that growing up in the '90s, we weren't exposed to as much information as kids are today. Like, there was this Wizard of Oz thing where things were behind the curtain, so to speak. We didn't see the wizard. We saw the magic show.

"Being able to see the magic show is a really good thing because it gives you the inspiration to make your own magic."

Tucker is careful not to sound like an old man yelling at the kids staring at their phones while mindlessly standing on his lawn.

"As a person that's 37 years old, I also understand there are tons of people in this world that are incredibly creative, and way more talented than I am, that can see other avenues of creativity that I haven't necessarily explored."

"Digital Natives" is not a song mourning a bygone era. It's a song that depicts the genuine struggle of a person trying to adapt to a new set of rules.

"I think that we're in a time period where the code has changed," Tucker says. "It's almost like people run on a computer code. In the '90s, we all operated on a postmodern code. Now we're sort of in this meta-modernist code which is totally weird for me. I have to adapt to it. I have to live by it if I want to be relevant in the world I live in."
KEEP THE DALLAS OBSERVER FREE... Since we started the Dallas Observer, it has been defined as the free, independent voice of Dallas, and we'd like to keep it that way. With local media under siege, it's more important than ever for us to rally support behind funding our local journalism. You can help by participating in our "I Support" program, allowing us to keep offering readers access to our incisive coverage of local news, food and culture with no paywalls.
Make a one-time donation today for as little as $1.