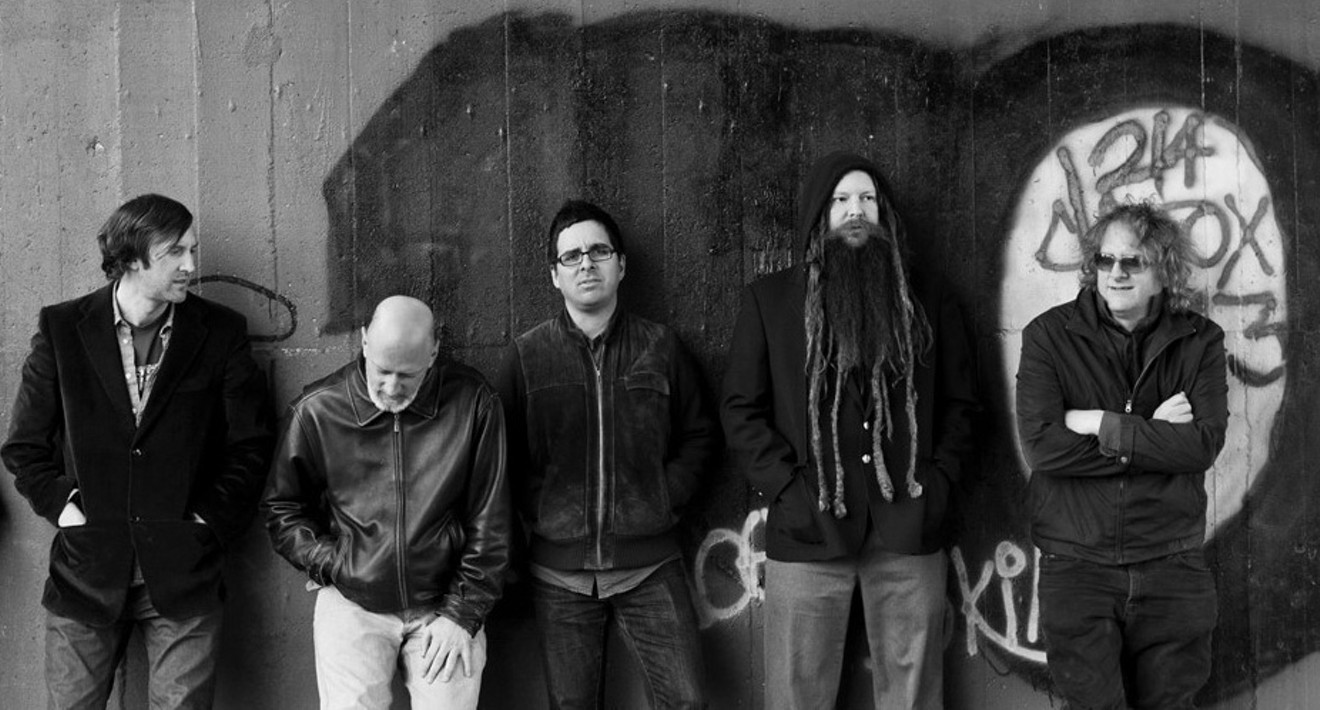 Chris Flemmons and his Baptist Generals head out for a tour this week to celebrate the band's 20th anniversary. Scogin Mayo

Chris Flemmons sits at a bench on the dimly lit, smoke-filled patio of Dan’s Silverleaf in Denton on a Monday evening, sipping a bitters and soda between tugs off his cigarette. He’s gearing up for an upcoming celebratory three-gig Texas tour with his band, the Baptist Generals, and the stress he’s feeling is evident.

Flemmons has an early-morning band rehearsal planned for the next day, he’s coordinating with a filmmaker on a documentary of the band and is still trying to get T-shirts made before they head south to Austin in two days for the first show. The tour's expenses are out-of-pocket, which explains its brevity. But it’s an important one, celebrating 20 years since the indie rock band’s career began with its first release, a nine-track EP titled Dog.

In a true Cheers-like fashion, a handful of folks making their way to Dan’s patio from the bar inside all know Flemmons’ name. Which is not surprising. He’s played the venue countless times over the years, mostly with the Generals, and his impact on the town’s cultural growth can be measured in part by his immense musical talent and the success of his music festival, 35 Denton. He turns 51 in a few days during the band’s tour stop in Dallas on Friday, prompting a newly found appreciation of the music he made in his early days on the scene.

“It’s like looking at a whole different person. It’s interesting to see how stuff progresses,” Flemmons says. He hadn’t listened to the band’s first majorly successful album that came out in 2003, No Silver No Gold, in about 15 years, but he recently played it through a pair of headphones. And the experience was like anyone who rediscovers a band they loved in their youth. “That’s a fucking great album, man,” he says. Recorded in his garage over four months, it defined Flemmons’ less-than-perfect vocals, in a Daniel Johnston or Bob Dylan kind of way, a good way.

Soon, an old buddy, Jason Williams, joins Flemmons on the wooden bench outside. Williams moved to Seattle and just flew into town the day before, and he and Flemmons can’t agree on exactly how long it’s been since they’ve seen each other, but they settle on somewhere around 12 years. Williams used to play in Flemmons’ first band, Poor Bastard Sons, and will be on tour playing in the band again as an opener. They were a country-esque band that Flemmons says was trapped in a “cornball country scene” with “cosplay-type characters showing up to shows in Western swing outfits,” and he wanted nothing to do with it. That’s when he left the Sons behind and started the Baptist Generals.


“We want more people to know who we are, and we need the people who are fans to go out and evangelize.” — Chris Flemmons

“[The Baptist Generals] was a little angrier and had some punk rock ethos to it, even though it was Southern gothic or whatever,” Flemmons says. But these days, perhaps a side effect of aging, he says he regrets not embracing the hype around that band way back when. “It was just a hokey scene. But I think it was a mistake [to leave], 20 years later.”

Though not necessarily prolific in number of releases, and only playing a couple of live shows a year lately — mainly at Dan's — the Generals have been hugely influential in the Denton music scene, and its members are all in other projects or touch on other creativities frequently.

The band’s current roster includes other highly respected music makers from around town who will join Flemmons on tour. Paul Slavens, KXT radio show host, 10 Hands frontman and all-around musical maestro, has been a member of the Generals for about a decade.

“I play weird keyboard sounds,” Slavens says of his role in the band, adding that he’s mostly stuck around to just hear Flemmons play the songs. Another virtuoso of the North Texas music scene is Jeff Ryan, who plays drums for the band. He’s played with Flemmons since 2003 when Flemmons asked him to go on tour in support of No Silver No Gold, when the original drummer and co-founder of the band, Steve Hill, had to back out. The band's full lineup also includes Peter Salisbury and Ryan Williams.

Music label Sub Pop eventually picked up the Generals' No Silver No Gold. This was when touring was much easier for the band, which toured across the U.S. and internationally. They were able to use the label, Flemmons says, as a "bank account" for necessities. Flemmons and Co. remained on the label until earlier this summer.

The anniversary's modest tour started Thursday and runs through Saturday, Sept. 18-20. It began in Austin and ends in Denton at Dan’s, where the Generals’ hometown fans will likely sell out the club. The tour also boasts new material from the band, including the single "Horse in the Valley," available on bandcamp.com.

In the Generals’ infancy, it was only Flemmons and Hill. They would bring their guitar and drum to the steps outside the Corkscrew, a now-defunct corner store that served the Fry Street district in Denton for years. They’d play for beer money and eventually caught the attention of Brent Best from the iconic Denton band Slobberbone. Best asked them to open for his band at Jim’s Diner. So they did.

“My knees were shaking. I had all kinds of motor problems because I hadn’t really played in front of people,” Flemmons says. Eventually the Generals went on to headline open mics on Tuesdays at Club Dada in Dallas before recording Dog shorty after.

One project Flemmons has been working on for a while is digitizing a vast collection of old cassette tape recordings he made years ago and gave out to friends as demos. These were one-of-a-kind copies, with no backup, for Flemmons to keep.

“I would make cassettes for people and hand them off and be like, ‘Here’s some stuff I’m working on,’” Flemmons says. He put out a public statement asking people if they had any of these old cassettes. “People responded saying, “Oh yeah, I’ve got this and this that you gave me,’ but it was all on cassette.” This digitizing project is in the process of becoming a compilation album titled Schitzo Harmonic and is available for pre-order on the band’s website, generalsmerch.com.

Flemmons decided to go DIY with the Generals, a decision that he stands by but has proved to be difficult, and has taken time to figure out again. “I want to own my music,” he says.

An indie band by all counts, they need as much financial support as possible. It's one thing Flemmons jokes about since nixing the label: “I used to be able to blame the label if we were failing at something. But I can’t do that now.” Moving forward, Flemmons says he wants to expand the band’s reach and get out of just playing hometown shows. “We want more people to know who we are, and we need the people who are fans to go out and evangelize.”

The revival of the Generals this year could ring in a new era for the band. And it’s certainly given Flemmons pause to reflect on the last two decades, gain a new sense of appreciation for his younger self and have unrestricted control of the band once again.

The Baptist Generals need fans to heed the call for support more than ever, and they need to appeal to a broader audience as well, one outside their comfort zone on the intimate stage at Dan's. Flemmons sums it up eloquently: “If we can’t get in front of new ears and eyes, we’re fucked.”
KEEP THE DALLAS OBSERVER FREE... Since we started the Dallas Observer, it has been defined as the free, independent voice of Dallas, and we'd like to keep it that way. With local media under siege, it's more important than ever for us to rally support behind funding our local journalism. You can help by participating in our "I Support" program, allowing us to keep offering readers access to our incisive coverage of local news, food and culture with no paywalls.
Make a one-time donation today for as little as $1.