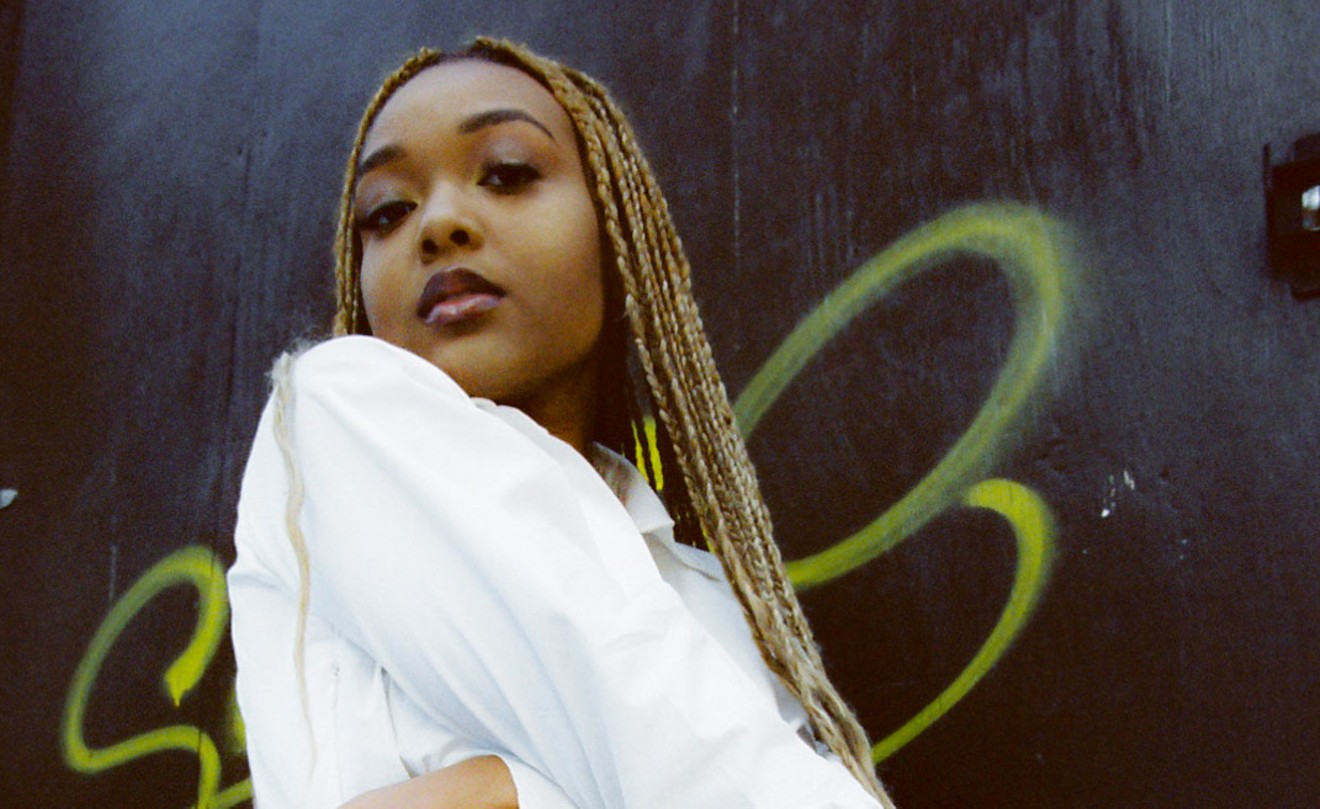 Every song Dallas R&B singer Lavoyce makes can go right into your naughty playlist. Grace Nicole
The pandemic may be throwing endless hurdles at the live music industry, but local artists remain as committed (and inspired) as ever to releasing original music. Here are the best new releases by North Texas artists.

Kaash Paige, "London" (Music video)
The walking vibe known as Kaash Paige released an official music video for "London," the title track off her debut album Teenage Fever. In the video, Paige looks to still be on her break from Dallas, waking up on the patio of a Hollywood Hills mansion after an eventful night with friends. The song is one of Paige’s best records. Yes, even better than her feature with Travis Scott.

Kaela Sinclair, "Spiral"
"Spiral" is Los-Angeles-by-way-of-Denton singer-songwriter Kaela’s first release of 2020. Self-produced and written by Sinclair, "Spiral" tells a story about the pain and grief that keeps cycling back like an ocean current that hits you in waves. The song hits just as gradually, as the singer's use of texture, layered vocals and loops forcibly draw you in. On her Instagram, Sinclair said she hopes the song can be a little release from everything going on in the world and that feeling those emotions of grief, pain and love remind us that we are, luckily, alive.
Coach Tev with Blake Cris and JO8s, Home by Dawn
Irving rapper Coach Tev linked up with Blake Cris and JO8s to release a four-track EP titled Home by Dawn. The release is complete with lyrics that could either be interpreted as motivation or confirmation. Each record has a snippet video attached that was released in chronological order ahead of the album's Sept. 21 drop date. “For those late nights that turn to early mornings,” Coach Tev says about the project.
Lexaayy, "No Rest"
Lexaayy’s debut single is well-mixed and nostalgic. Damn Xela produced the record and went full on Missy Elliot and Mary J Blige. It’s a rare sight to see two women behind the sole production and completion of a song in the hip-hop and R&B world, and the result sounds like a record P.Diddy would have released under Bad Boy Entertainment in the early '2000s.
Salim Nourallah, "Kite"
It's been almost three years since Dallas instrumentalists and songwriters Salim Nourallah, Chris Holt, and Paul Averitt released part one of the album A Break in the Battle. The track list is a set of Nourallah’s favorite records completely stripped down and rebuilt in the collective’s image. Part two is set to release later this year and on Sept. 9, Nourallah put out a reimagined version of "Kite" by Nick Heyward. The song could surely end up on the second installment of A Break in the Battle.
FlowerChild aka Flozilla, "2020 2.0"
FlowerChild, aka Flozilla, let us know how she is feeling this year with a new freestyle, "2020 2.0." It's clear the queen is her higher self and not letting current events in the world beat her up. Instead, she talks about remaining optimistic, motivated and continuing to stand up and fight for her people. "2020 2.0" is four minutes of no-hook, honest ether. And the music video is cool, too.

Leroyce, "42"
On his new single "42," Leroyce said even with his back against the wall he is still swinging for the fences. It's another soulful rap release from the Dallas-based producer and rapper. The song was released on Sept. 20, and has already clipped 44,000 streams on YouTube. It’s the fourth single the artist has released in four months, so it’s safe to say he could have a full-length album in the works.
The Deathray Davies, "Then You Met Me"
The Deathray Davies are back with their first release in over 15 years with "Then You Met Me." The record is inspired by the '60s British invasion and is a single off their upcoming album Time Well Wasted. The well-traveled Dallas garage band has spent the past 15 years working on individual projects but jumped at the opportunity to get back together. The album's title is fitting, and the song is classic The Deathray Davies.
Cure for Paranoia feat. M3cca, "Cold Water"
Cure for Paranoia and M3cca’s single, "Cold Water," made us feel like we were in seven different Las Vegas night clubs at the same time. The record is electronic, soul, hip-hop, R&B, jazz, pop and Caribbean music effortlessly woven into three minutes, and the end result is a beautiful and trippy collaboration from the Dallas musicians.

Lavoyce, "Trust Issues" and "Rollin’"
Every song Dallas R&B singer Lavoyce makes can go right into your naughty playlist. The artist recently released a solo single, Trust Issues, and was featured on a record with Dallas producer Boy Jugo titled "Rollin’." Both releases are stories of pain, trust and love. Essentially, R&B in its purest essence.
KEEP THE DALLAS OBSERVER FREE... Since we started the Dallas Observer, it has been defined as the free, independent voice of Dallas, and we'd like to keep it that way. With local media under siege, it's more important than ever for us to rally support behind funding our local journalism. You can help by participating in our "I Support" program, allowing us to keep offering readers access to our incisive coverage of local news, food and culture with no paywalls.
Make a one-time donation today for as little as $1.