Blackpink Brought the Heat to American Airlines Center on Tuesday 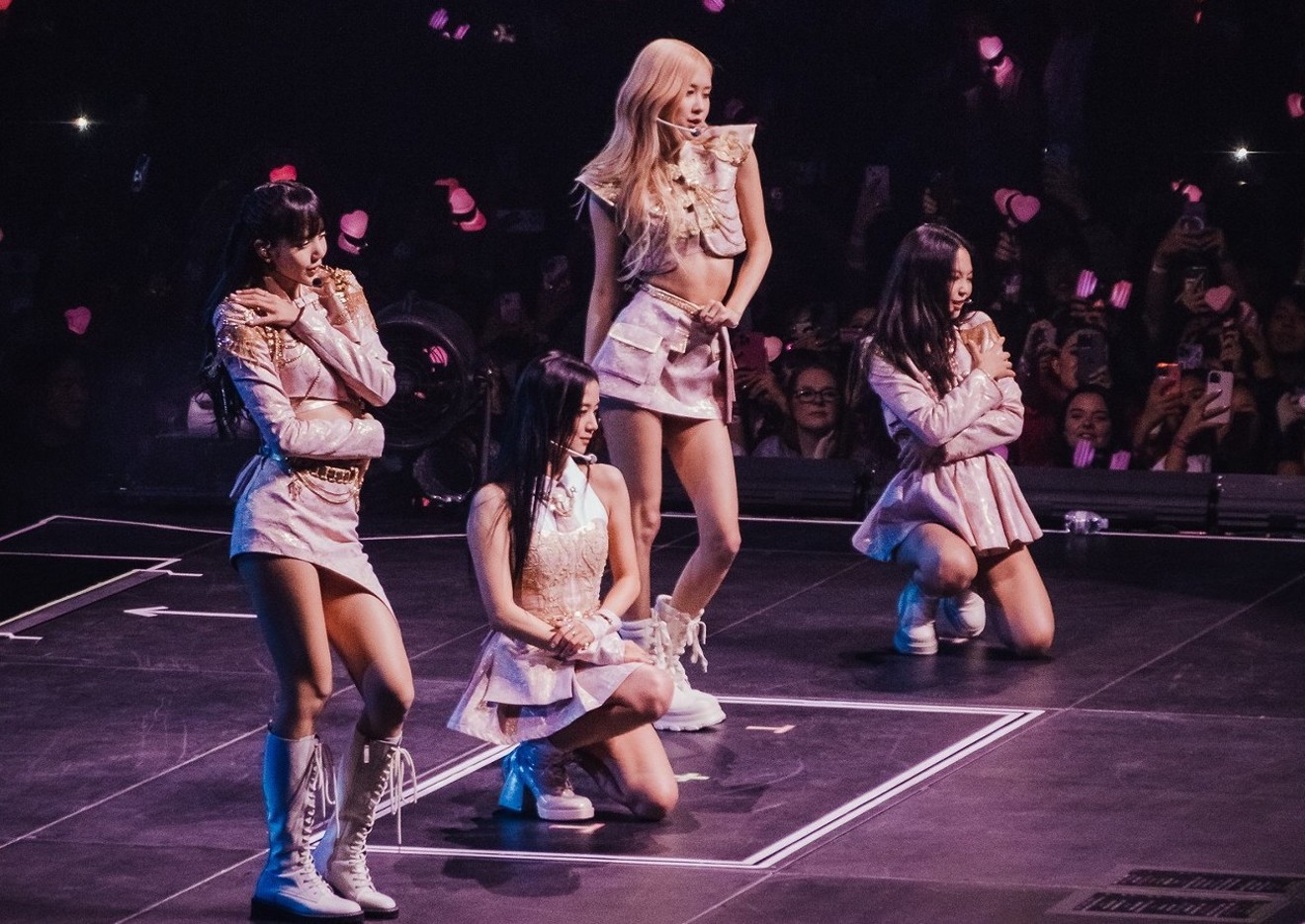 Lisa, Jisoo, Rosé and Jennie's outfit game was on point. Rachel Parker
On Tuesday night in Dallas, one of the biggest K-pop bands in the world, Blackpink, kicked off the North American leg of its Born Pink tour. It would be the first of two nearly sold-out shows at the American Airlines Center.

Signs adorned the venue's windows advising fans or “Blinks,” the name with which the fandom identifies, that they could not line up or get their general admission floor wristbands until 10 a.m. the morning of the show. A nice touch from the tour was a merch truck outside the venue on the plaza that allowed fans who arrived early to secure their swag without losing their coveted position in line.
click to enlarge Those were the longest lines at the venue. It seemed like any fan who entered the building just had to buy the light-up heart-shaped hammers, which were basically fancy $55 glow sticks. They were everywhere, and as fans waved them along enthusiastically to the beat the lights would blink. A nod to the fandom perhaps? We won’t be surprised if there are some seriously sore biceps after the concert.

Before Lisa, Rosé, Jisoo and Jennie even hit the stage, their music videos began adorning the screen to keep the crowds amped up. It was a little odd, but the audience erupted in excitement each time a video ended.

The group had no opener, and the girls hit the stage around 8:10 p.m. when a giant screen opened up and revealed them on an elevated platform, kicking off the set with their hit song “How You Like That.” As the smoke cleared, it revealed the quartet in matching outfits, similar in color but in varying styles. Backup dancers flooded the stage as they kicked it into some cute yet well-rehearsed choreography.

Blackpink has a hefty discography, and they stacked the evening with fan favorites as well as almost all of their latest album and tour namesake Born Pink. Once they were a few songs in, they took a moment to introduce themselves before heading down the thrust stage to perform “Don’t Know What to Do,” finishing the first set of songs with “Lovesick Girls.”

The group members were then lowered into the catwalk at the end of the show's section, as confetti streamers rained down over the Blinks on the floor.
click to enlarge Blackpink on the first night of two at AAC.
Rachel Parker

As an interlude video played on the screen to buy time for the band to change outfits, the audience used those precious minutes to sit and rest their glow-stick-weary arms. When the lights came back up, the K-pop stars were back on the original platform where they had started the evening. The silence was cut with horns and their trademark slogan “Blackpink in your area” caused the audience to go wild. The cause of the commotion was “Kill This Love,” which has over 1.6 billion views on YouTube. Sparks and flames shot out of the stage as the ladies walked down the V-shaped ramp that lifted up to meet them.

Rosé danced so hard during the number that both of her boots came untied. While she took a moment to fix them after the song, the other girls vamped with the audience a little bit and took a moment to introduce their band members. It was in these little unscripted and in-between moments that their personalities really got to shine.

The production was a visual feast, complete with large moving screens, rolling platforms, lifts, lasers, sparks, fire and confetti. So much confetti. Honestly, so much fire, also. It’s kind of amazing the confetti didn’t catch fire. The tour also used an incredible lighting rig that morphed and moved up and down as needed, spewing out smoke as the band broke in one of their newest bops, "Pink Venom." They finished up the second act as their dancers flooded the stage in an all-out You Got Served-style dance-off.
click to enlarge There was so much confetti at the Blackpink concert Tuesday.
Rachel Parker

The Blackpink members then started a solo showcase, giving each of the ladies their moment to shine while performing one or two songs. Jisoo was up first, and as her name flashed largely on the screens, she sang Camila Cabello’s hit “Liar” complete with full choreography, backup dancers, pyro, the works. And while her vocals aren’t as strong as the other girls', it was easy to see why fans really adore her sweet, softer manner.

Next up was Jennie, who performed a new unreleased song titled “You & Me (Moonlight)," to the audience's delight.  A projection of the moon came up on the LED screen behind her as a male dancer did his best imitation of ballet. Their choreography was pretty, but not quite ready for Swan Lake.

After Jennie, Rosé was up, and she performed "Hard to Love" as well as a song from her solo album titled On the Ground. While Rosé is undoubtedly the best studio vocalist in the group, her live performance, while still good, wasn’t quite at the level you'd expect from her recorded vocals.

Lisa finished up the solo portion by bringing the fire, doing two songs from her solo project, "Lalisa" and "Money." Both performances dripped with swagger and attitude. It was obvious that she is the most comfortable onstage in the group. You know what we're going to say here: Every band has that one member who transcends the group, from Justin Timberlake to Harry Styles. Lisa is an absolute star and has that staying power. If you like a poppy hip-hop vibe, think Cardi B, or Doja Cat. Lisa can hang with the best of them.
click to enlarge The girls then came back together to compliment one another on their solos. We loved seeing these queens gassing each other up. All that hype must have acted as a catalyst, because Blackpink proceeded to blow the roof off the American Airlines Center.

The audience danced along to the choreography, soaking up the heavy-hitting beats and hip-hop flair of "Type Girl," hitting the crowd with the sound of "Ddu-du ddu-uu." Lisa, Jennie, Rosé and Jisoo took a moment to say thank you and wrapped their main set with a song from 2018 that launched them into the stratosphere, “Forever Young.”

After a break — and after making the audience work for it by chanting "Blackpink" over and over — the band members returned to the stage dressed in matching skirts and in their own tour merchandise, which looked pretty comfy. It was a brilliant marketing move.

This was the only time in the evening that everything didn’t seem completely choreographed. It was refreshing getting to see the ladies genuinely interact with their Blinks and not have to worry about hitting a mark on the stage. At one point, Jennie even excitedly ran under the falling confetti getting so tangled and draped in it that it looked as if she'd found the perfect mummy costume for Halloween.

The fun and candid mood of the encore was something which the show could have used more of throughout. It was the liveliest the audience looked, jumping along with the K-pop stars, singing along to “BOOMBAYAH” and “Yeah Yeah Yeah.” While the incredibly tight and rehearsed performance portions looked and sounded great, they masked a good 80 percent of the performers' personalities.
click to enlarge 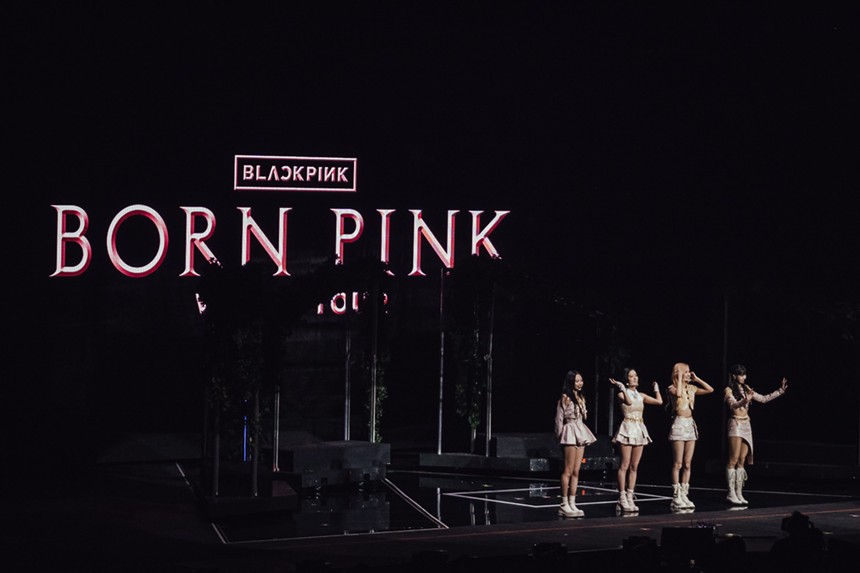 The amount of practice and planning that goes into a show like Blackpink's is no doubt colossal, and the show could benefit from a little loosening up and the addition of a bit more spontaneity. The group is at their best when they are performing together, from Jennie’s rap break downs, to Rosé's emotional belting, Jisoo’s shy but bubbly performance and the incredibly multitalented Lisa bringing the sass and star power.

The four of them have the ability to captivate and entertain on their own without all the effects. When you flood the stage with 20 backup dancers, constant pyrotechnics and confetti every four songs, it’s going to start to feel bloated.

Ultimately, their performances are tight, the choreography is top-tier, and the lighting and theatrics were fantastic. Sometimes you need to scale back on the effects, and edit a little to create the best version of a show.
click to enlarge Glow hammers everywhere the eye could see.
Rachel Parker
KEEP THE DALLAS OBSERVER FREE... Since we started the Dallas Observer, it has been defined as the free, independent voice of Dallas, and we'd like to keep it that way. With local media under siege, it's more important than ever for us to rally support behind funding our local journalism. You can help by participating in our "I Support" program, allowing us to keep offering readers access to our incisive coverage of local news, food and culture with no paywalls.
Make a one-time donation today for as little as $1.