Weezy was feeling the Dallas crowd. At least he didn't cut his set in half. Mike Brooks
On Wednesday, we published a concert review of New Orleans hip-hop duo $UICIDEBOY$, who played Toyota Music Factory on a quasi-touring festival called Grey Day Tour, which meshed both hip-hop and hardcore punk acts. There was a rather noticeable stylistic contrast, but each act earned a positive and lively reception from a young and diverse audience.

Rock and hip-hop acts being co-billed on a tour package is not unprecedented (U2, for example, brought Public Enemy on tour in 1992), but as long as such billing remains controversial, it still warrants analysis, and Friday night provided a perfect catalyst — Blink-182 and Lil Wayne at Dos Equis Pavilion. 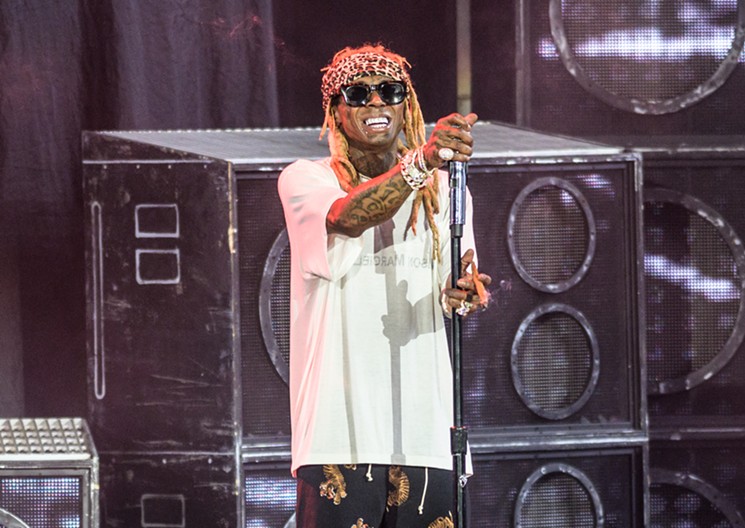 Weezy was feeling the Dallas crowd. At least he didn't cut his set in half.
Mike Brooks
We attended and observed this show, and after careful consideration, we have reached a verdict: Older people do not view rock/hip-hop infused bills as favorably as younger people.

That much was evident in the weeks leading up to this show. A noticeable contingent within Blink-182’s fan base objected to the billing upon its announcement, and at a July 11 tour stop in Bristow, Virginia, Tunechi (as Lil Wayne is called), ended his set after 20 minutes. Per a video uploaded by TMZ, the rapper, born Dwayne Michael Carter, said, "Hold on, I just want the people to know, if you're wondering, please forgive me, but I am so not used to performing to a crowd and there's not too many, you know, like still, that's not my swag."

And granted, DJs are tasked with amping up the crowd, but as evidenced by the DJ’s performance Friday night, it doesn’t seem that he was any help in remedying the crowd’s disinterest. DJ T. Lewis, Lil Wayne’s DJ, took the stage at 8:05 p.m., and he was hyping up the crowd for the self-proclaimed “Greatest Rapper Alive” for a good 20 minutes. It was pure hell.

Then he started shouting out more oddly specific demographics. If Weezy had taken any longer to get onstage, all the left-handed daughters of Freemasons who were born in late November might have been asked to make some noise.

As Lil Wayne finally took the stage, the audience reception was mixed. There was a small but vocal group that showed up specifically to see the New Orleans rapper and a larger segment that came to see both headliners. Looks of disinterest were seen on most of the (let’s be honest) older white people in the crowd.

Despite the audience’s relatively lukewarm response, Tunechi seemed to be in his element. This wasn’t the same Lil Wayne who flaked on his set in Bristow. Professionalism might have come easier for Weezy in a crowd of what looked to be 15,000 people, but not enough performers give recognition to stage crews or show enough humility to say that they are nothing without the audience. That's what Weezy did, and it was quite admirable.


Despite the audience’s relatively lukewarm response, Tunechi seemed to be in his element. This wasn’t the same Lil Wayne that flaked on his set in Bristow.

Still, if there was any justice in the world, he would have been given a more enthusiastic ovation. This is the same Lil Wayne who gave rise to A-listers such as Drake and Nicki Minaj; the same Lil Wayne who has, to date, 163 Billboard-charting songs. Most of the people in attendance didn’t seem to know or care for inescapable hits such as “Lollipop,” “A Milli” or “Got Money.” Even when Weezy put his own spin on Lil Nas X’s “Old Town Road,” many looked indifferent.

Twenty-five minutes after Lil Wayne exited the stage, Blink-182 came on to a more favorable response from the audience. The Los Angeles pop-punk trio played their multi-platinum full-length Enema of the State in its entirety, so they had the unique advantage of tapping into the nostalgia of every person in the audience that came of age in the early ’00s.

At that time, they were considered to be a juvenile novelty band of sorts, and their set certainly had its share of it. The Enema promotional single “Family Reunion,” for example, is only 36 seconds long and has all of George Carlin’s seven dirty words and the lyrical passage “I fucked your mom.” The band also played its more recent single “Built This Pool,” which is 15 seconds and comprises solely of the lyrics “I wanna see some naked dudes / That’s why I built this pool.”

To Blink-182’s credit, they have always been thematically multidimensional. One of the band’s most popular singles, “Adam’s Song,” is a rather candid discussion about suicide and depression, while “Stay Together For the Kids” (which they did not play Friday night) was written by former guitarist Tom DeLonge and inspired by the impact his parents’ divorce had on him as a child.

Plus, given the thousands of people who rapturously applauded and sang along to even the deep cuts, it’s clear that Blink-182’s impact on people is still noticeable two decades later. The same cannot be said about any novelty act.

So why do people in their 30s still connect so deeply with Blink-182? Well, a 2018 survey by music streaming service Deezer found that people tend to experience a “musical paralysis” at age 30, wherein they stop discovering new music and stick to the familiar territory of what they listened to during their formative years.

You get stuck in your own ways when you reach 30, and that’s especially true in the realm of music. From that and the polarizing response this tour’s billing received, we can deduce that a considerable chunk of the crowd stayed coddled in a fragmented niche and wasn’t as engaged in hip-hop during their youth.

That’s not to say this experiment failed — this show actually convinced us that rock/hip-hop infused tour packages can never fail. If the audience responds to it warmly, then it’s a success. If the audience is uncomfortable and polarized by it, that just proves why the experiment is necessary to begin with.

Mike Brooks
KEEP THE DALLAS OBSERVER FREE... Since we started the Dallas Observer, it has been defined as the free, independent voice of Dallas, and we'd like to keep it that way. With local media under siege, it's more important than ever for us to rally support behind funding our local journalism. You can help by participating in our "I Support" program, allowing us to keep offering readers access to our incisive coverage of local news, food and culture with no paywalls.
Make a one-time donation today for as little as $1.