Bon Jovi Thought About Breaking Up, But Their Extra Long Set Last Night Showed No Signs 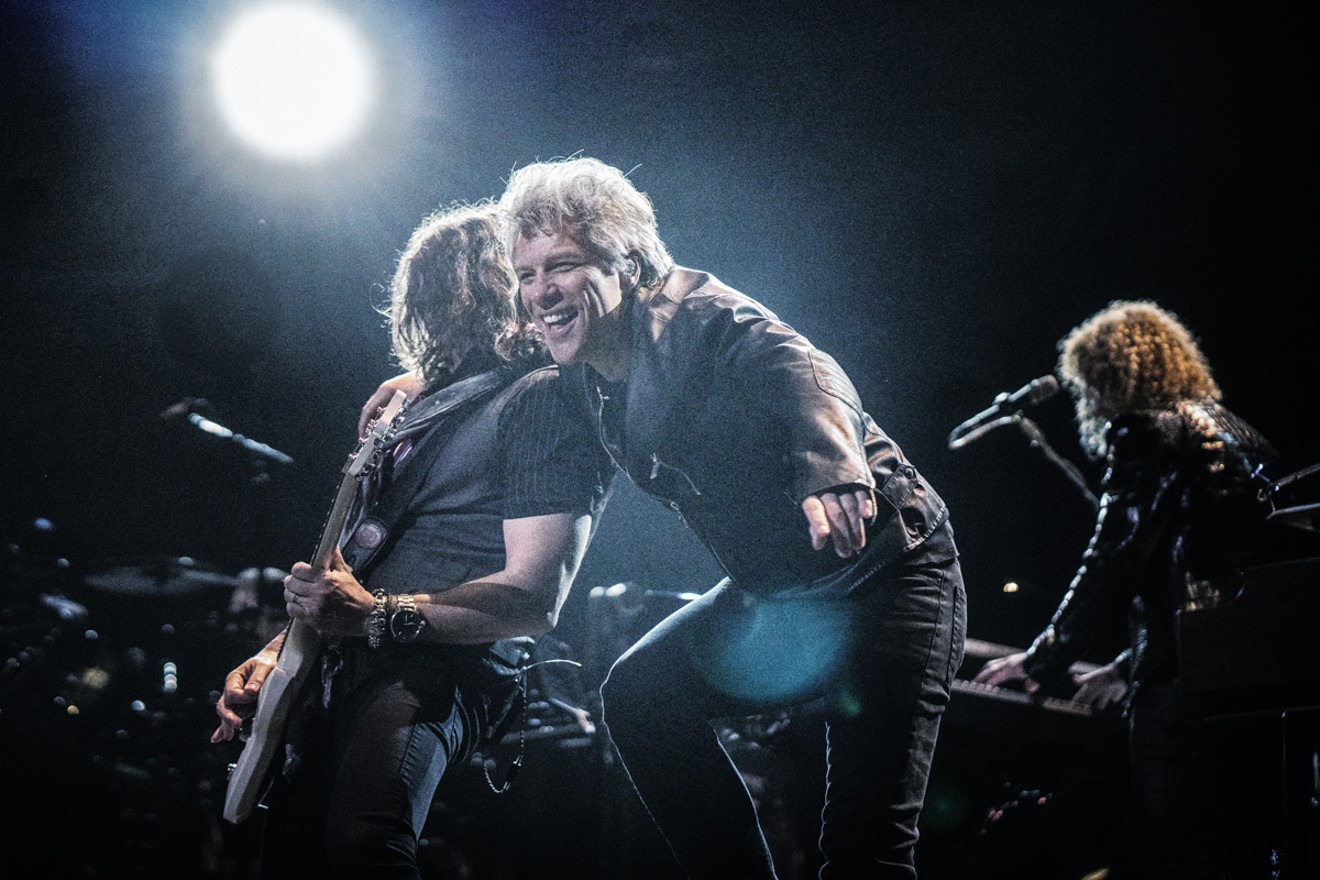 Jon Bon Jovi told the audience This House Is Not for Sale was named after a picture of a stone house he saw in a magazine that inspired him to keep the band together a while longer. Mike Brooks
Although he’s known for “Livin’ on a Prayer,” Thursday night at American Airlines arena was enough to prove that Bon Jovi is living a dream. It’s been three years since they came through Dallas, an absence that Jon Bon Jovi himself was acutely aware of. He admitted that he was at a crossroads several years ago of not knowing whether to continue making music, and the band almost called it quits.

“I was thumbing through a magazine, questioning the future of the band and if our legacy was still worth fighting for. I came upon this picture of this stone house with deep roots; this was it. And the song came together; this soul, this heart, this house is not for sale,” he told the crowd.

If not stronger than ever musically, he came back at least as sprightly to promote his new album This House Is Not for Sale. The band played a two-and-a-half-hour set that felt, at times, that it would continue all night. People in the audience became fatigued and took their seats, but the boyish Bon Jovi never lost momentum, bearing his white-toothed grin as he played with the audience and hopped along the large stage with the enthusiasm of a man at least 20 years younger.

Bon Jovi seemed to feed off the fan response both in creating the album and performing live. “We realized once we put the song out, people started to take these songs. ... You made it about your relationships, your school, your team, your stadium. ‘Got some blood under my nails ... but don’t cry for me, I’m the life of the party. I’m doing just fine.’” 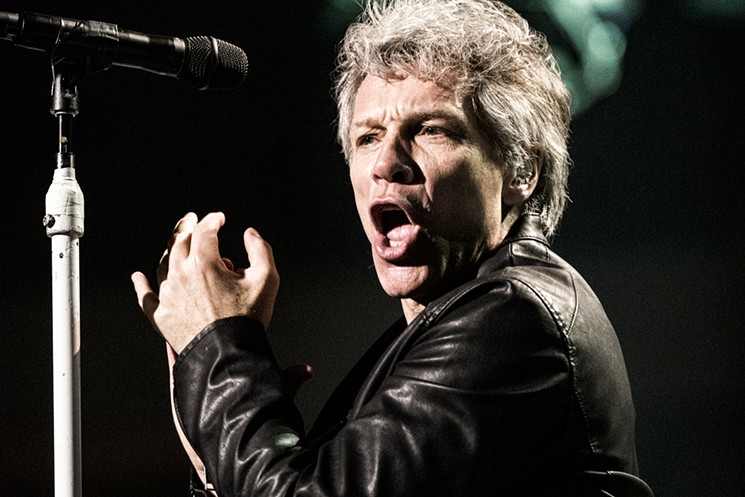 Jon Bon Jovi is still going for sex appeal: “You know I come back to Dallas, Texas, for one reason. I like to make those Texas girls scream.”
Mike Brooks
During “Shot Through the Heart” his voice trailed off in the chorus, almost suggesting there was a technical malfunction or he forgot the lines, but it kept happening on the same lines each time. There was no real evidence as to why, but it was noticeable and didn’t sound good.

During other songs, his voice was stronger, and thankfully, he had the full benefit of his six-piece backing band, most of whom helped out melodically on vocals. At least several of the members have been with Bon Jovi since the beginning, including David Bryan on keys and Tico Torres on drums. Bassist Hugh McDonald joined the band officially in ’94, more than 10 years after they started, but he was one of the original session musicians who played on the demo of “Runaway.”

Bon Jovi seemed thrilled to be still performing with his buddies from way back. And although they’ve been playing these songs for over 30 years, there seemed to be sincere joy and enthusiasm on their faces — they are showmen commanding the biggest stages for a reason.

Guitarist Phil X, who’s played for Tommy Lee, Kelly Clarkson and Avril Lavigne, replaced Richie Sambora in 2013, and his stage presence and the way he interacted with the audience almost rivaled Bon Jovi. Ever the engaging host, Bon Jovi didn’t forget to shower a little love on the audience sitting behind the stage, saying to them, “For the next two and a half hours you're going to be staring at my rear end. I hope that's OK?” 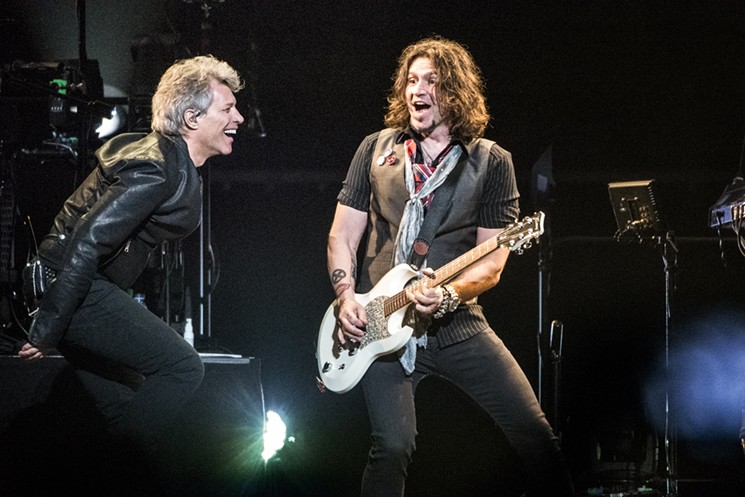 New guitarist Phil X, who replaced Richie Sambora in 2013, brought almost as much personality to the stage as Jon Bon Jovi himself.
Mike Brooks
He did a fine job of making Dallas feel like it was the only one in the room, saying, “You know I come back to Dallas, Texas, for one reason. I like to make those Texas girls scream.” The audience was mostly middle-aged women, and they ate it up, shrieking adoring catcalls to the stage. It was ear-blistering.

The catalogue of Bon Jovi’s new material from This House Is Not for Sale sounded mostly the same, but the monotony wasn’t offensive. It was subliminally catchy, like something playing in the background of a dream that you can quite latch onto. Lyrics weren’t hard to understand and the beat was bouncy enough to warrant dancing.

Bon Jovi’s biggest hits like “Livin’ on a Prayer,” “You Give Love a Bad Name” and “Wanted Dead or Alive” elicited a stadium full of audience participation. You’d have to have lived under a rock to not know these songs. Despite a current album that will be hard pressed to stack up to his early hits, it seemed that the crowd didn’t care. They were mostly there to soak up the old anthems and relive old memories, much like Bon Jovi. Except for that one girl in row J, seat 17. She knew all the words to every song.