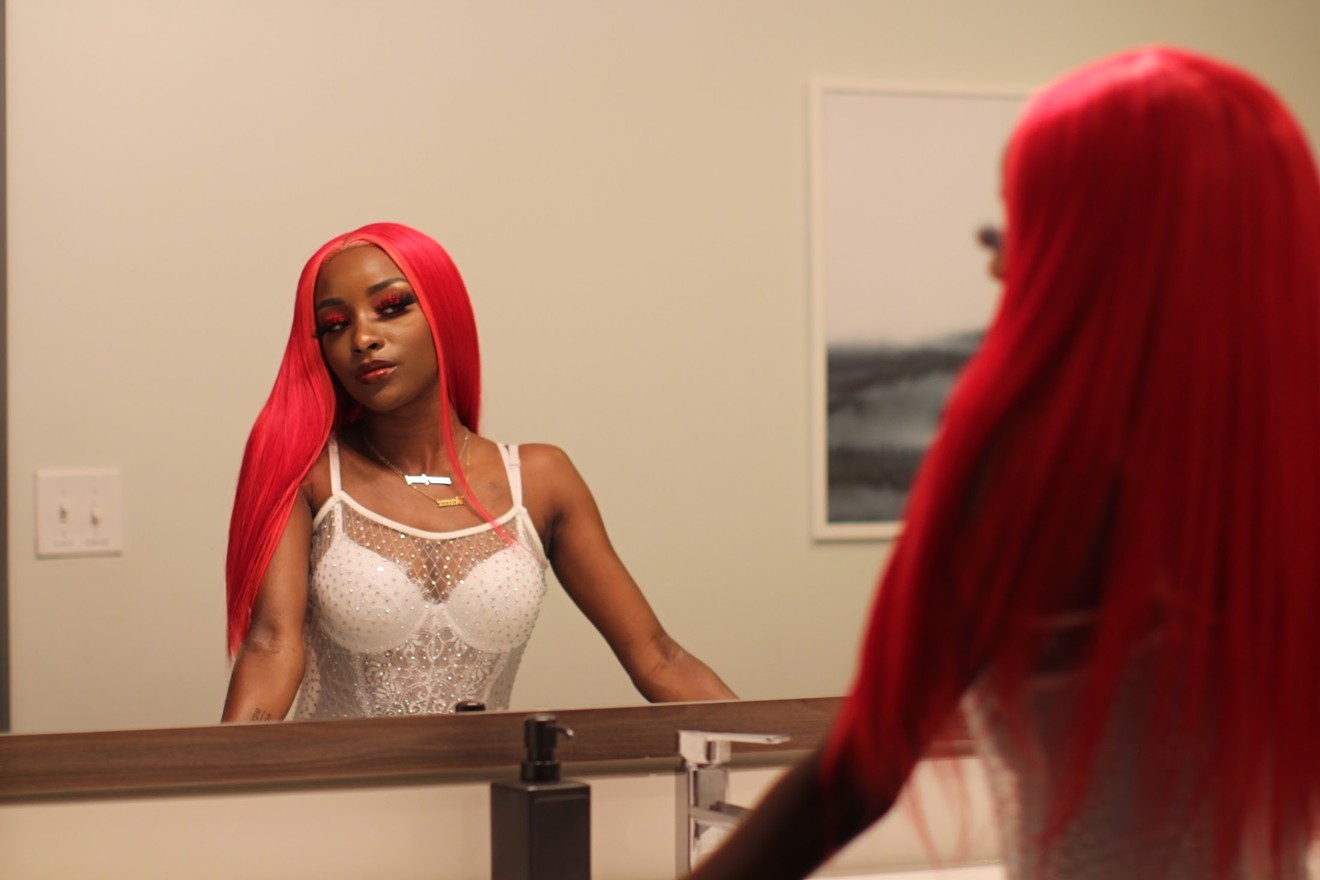 She's cute, but she also "has to" be a diva in a ruthless, misogynistic world, Brionne says. Brysen Smith

Shortly after she started rapping, Brionne was invited to a cypher, an informal gathering where rappers showcase their quick wit and lyricism. This was a big opportunity for Brionne. She would be one of two women at the cypher, and she’d have a shot to prove the doubters wrong.

She wrote a rap, got her nails done, and arrived at the cypher prepared to slay the competition. Then, when it was her turn to rhyme, the worst possible scenario became reality.

The other rappers were encouraging, but the damage was done. Brionne, just 21 and a hip-hop neophyte by every standard, was utterly embarrassed.

“That was so humbling,” she says, recalling the incident three years later. “I realized I hadn’t put in the work I needed, and nothing feels worse than that. But if you don’t like to embarrass yourself, don’t rap.”

Brionne could have called it quits then, and no one would have been surprised. By her own admission, the rapper is apt to jump from one hobby or occupation to the next, never spending much time on one passion. Rap was different, though.

“I told myself, ‘If you start this and really like it, you have to keep going,’” she says. And despite the ignominy brought on by the event, Brionne was determined to turn rap into a reliable side hustle, and hopefully one day her main hustle.

“That’s the key to life: Monetize what you like,” she says. “And if you take an L, never take it again.”

Brionne is now 24 and a few years into a fledgling music career. The artist, whose real name is Courtney Starnes, has an unusual origin story. A few years ago, she was designing clothes (mostly hats and graphic tees) and wanted to throw together a commercial to showcase her craft. When she started writing jingles, she sampled beats from Biggie and Tupac songs and tried her hand at rapping over some classics.

“The funny thing is that the jingles were never about clothes,” she says. “Actually, it seems like I was rapping about everything except clothes.”

With a penchant for poetry and a fast-paced, rat-a-tat manner of speech, Brionne discovered she had a knack for rapping. But it’s one thing to write some fun rhymes and another to make money with your music. She adapted her middle name as her rap moniker, hired a manager and some engineers and converted the money she earned waiting tables into studio time and video shoots. Each step of the way, she battled varying forms of sexism. Sometimes it was implicit, like hesitance to pay her what she demanded for a feature. Other times it was quite literally explicit, like when a man told her she should be “more sexual.”

“Misogyny is like eating cereal at this point,” she says. “It’s an everyday thing. I’ve had to become a bitch sometimes just to get my point across, and the real ones understand that. That’s why female rappers get the diva label. You can say, ‘She’s a diva, she’s a bitch,’ and yeah, I am. I have to be.”

Brionne isn’t bitter when she says any of this. In fact, she relishes the diva label and welcomes any challengers who doubt her skills.

“That’s why I like to rap with men,” she says. “I want to kill them on the track and push myself to rap about something that men will want to listen to.”

One example is her song “Tropics,” from a six-song EP she released in 2019. On the track, Brionne’s verses drip with bragaddocio. She raps about being a player, riding hoes like Harleys and thinking about nothing but gwalla (money). It’s evident that Brionne is having the time of her life every time she raps, and with “Tropics,” she has almost as much fun telling the story of how the song came to be.

She wrote some lyrics and rattled them off to her brother, an 18-year-old hip-hop head.

“‘That shit is hard,’” he said. And Brionne banked on other guys feeling the same way. She spends a lot of time reaching out to other artists, recruiting them for collaborations, and has recently struck up a friendship with the soul musician Loners Club.

“She’s a bomb-ass big little sis,” Loners Club says. “She’s hella blunt and feisty like I am, so we mesh and communicate well.”

Yet there is a softer side to Brionne. Fans don’t often see this side of her, and it might seem at odds with the cocky, gun-toting, money-throwing rapper on display in her music videos. Since middle school, Brionne has written poems. She has performed some spoken word pieces, but mostly, she keeps these rhymes to herself. Lately, though, she’s started to think that it might be time to put this work out there. She’s kicking around an idea for a mixtape composed entirely of spoken word performances, and even though the idea terrifies her, she thinks she’s ready.

Just as she’s not going to let a man dictate what she can or cannot rap about, Brionne won’t let anyone tell her what kind of artist she is or isn’t.

“Poems have always hit me a little different,” she says. “There’s just something about them.”

Whenever she is down, whether from a rough day at her Cheesecake Factory gig, an argument with her man or a spat with a friend, she’ll grab her pen and some paper.

“I’ll just sit in my car, put on a beat, and let my mind go,” she says. “Eventually, I’ll start writing something.”

Maybe it’s a rap. Maybe it’s a poem. Maybe it’s whatever she wants.
KEEP THE DALLAS OBSERVER FREE... Since we started the Dallas Observer, it has been defined as the free, independent voice of Dallas, and we'd like to keep it that way. With local media under siege, it's more important than ever for us to rally support behind funding our local journalism. You can help by participating in our "I Support" program, allowing us to keep offering readers access to our incisive coverage of local news, food and culture with no paywalls.
Make a one-time donation today for as little as $1.