The 10 Best Concerts of the Week: Logic, Glassjaw, Jason Aldean and More 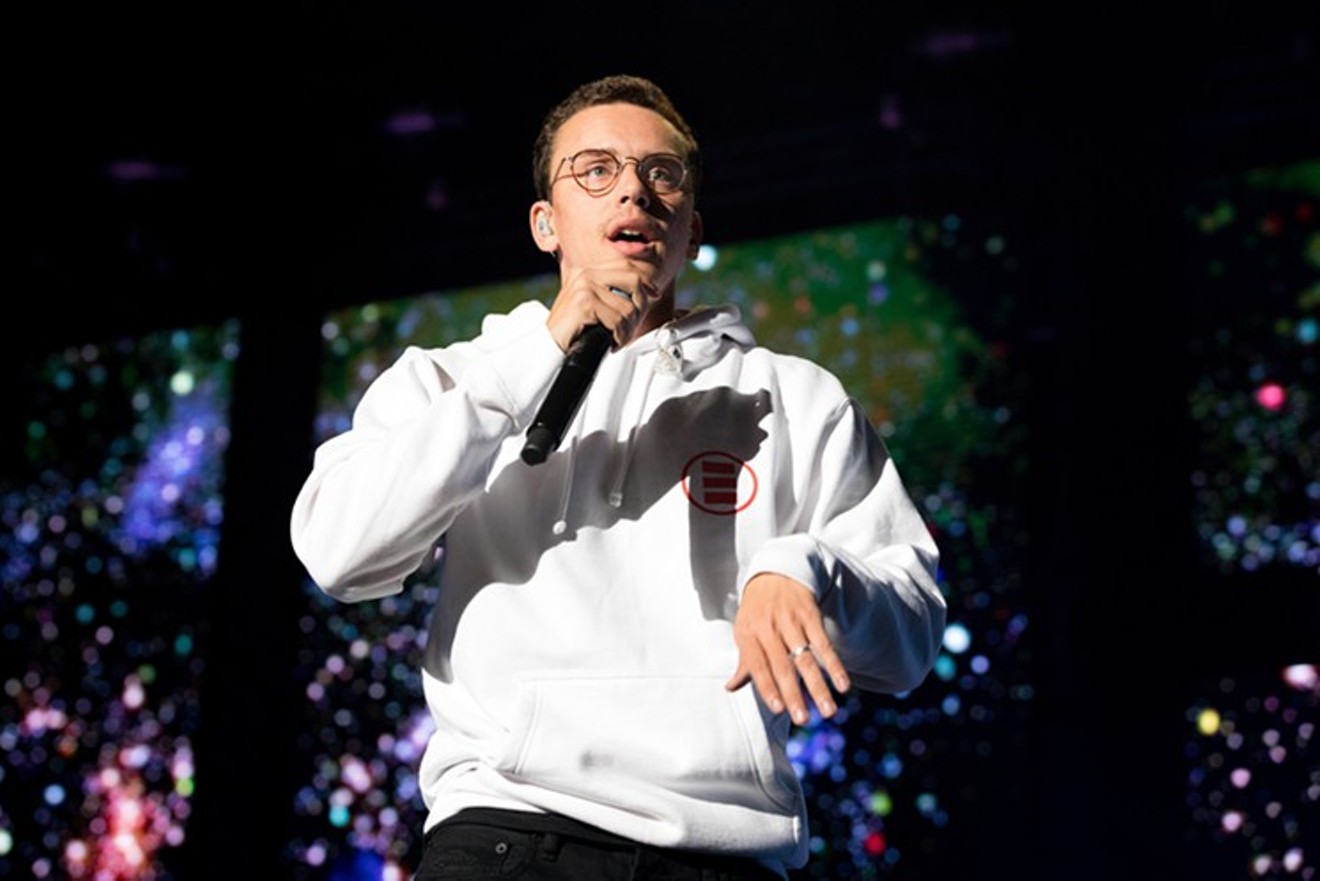 Record high temperatures may be dampening your summer days, but don't let them get the best of your nights. Catch several cool acts this week, including Logic, Paul Oakenfold, Hall & Oates, Glassjaw and more.

After touring last summer with Tears for Fears, Daryl Hall and John Oates return to American Airlines Center to make fans’ dreams come true. This summer, the duo embarked on a 37-stop arena tour with Train. The bands are co-headlining, and each reportedly will perform a full set before they take the stage together for a joint finish. Train tours in support of A Girl, a Bottle, a Boat, which it released in 2017. No doubt the shared finale will include “Philly Forget Me Not” after Hall & Oates teamed up with Train earlier this year to record and release the duo’s first single in more than a decade. Both Hall and Oates have stayed busy touring and releasing solo records. Hall released Laughing Down Crying in 2011, and Oates’ latest album, Arkansas, dropped in February. After decades of touring, Hall & Oates know the devoted fans at arena shows want to sing along to chart-topping radio hits, so expect to hear favorites, from “You Make My Dreams” and “Rich Girl” to “I Can’t Go For That (No Can Do)” and “Private Eyes.” Daniel Rodrigue

Adam Duritz and his small army of bandmates celebrate 25 years together this summer. Through a number of line-up changes and additions, the band has never really stopped putting out albums. Expect this show to have many of the familiar songs that made the group a mainstay in the charts throughout the ’90s. The band Live is also playing, so it will be a ’90s nostalgia trip. Eric Grubbs

Seether carved a path to success through an era of music littered with pitfalls. When the South African post-grunge band formed in 1999, Limp Bizkit looked like the future. But nearly a decade later, Seether is still making relevant music and staying true to its hard rock roots. Frontman Shaun Morgan self-produced the band’s 2017 release, Poison the Parish, through his new imprint, Canine Riot, citing studio interference as the reason for the change in production. He told Billboard the studio wanted him to tone down the guitars, sound more like Imagine Dragons, be radio-friendly. Instead, Poison the Parish is one of the group’s heaviest releases in recent years and its fourth consecutive Billboard No. 1 hard rock album. Tracks such as “Betray and Degrade,” with its singsong pace and dichotomous guitars, or the slow burn avalanche of yearning harmonies on “Against The Wall,” can stand tall next to the biggest of Seether’s hits from the aughts. Alt-metal outfit 10 Years is joining the band fresh off an unexpected reunion after its 2017 release, (How to Live) As Ghosts. The Dead Deads, a post-grunge quartet out of Nashville and former The Dead Milkmen cover band, will round out what looks to be an eclectic and high-intensity bill. Nicholas Bostick

Glassjaw and Quicksand, two of post-hardcore’s premier acts, returned from the dead last year with their first full-length releases in decades. True to form, each fused brutalist energy with avant-rock structures and nu-metal textures, even if Quicksand’s album Interiors was predictably softer around the edges and more spaced out. It makes sense that the two bands would join forces to co-headline their latest summer tour. Considering both outfits are responsible for some of the finest cuts in the post-hardcore canon, those with any interest in alt-rock, metal and hardcore (especially of the mid-’90s variety) would be wise not to miss this. Shit's going to get intense. Jonathan Patrick


The English Beat
8 p.m. Wednesday, July 25, The Kessler Theater, 1230 W. Davis St., 214-272-8346 or thekessler.org, $24-$48
The English Beat is really just The Beat — a ska fusion band from Birmingham, England — but you can imagine that such a name would also exist in the U.S., Canada and Australia. So here in the states, it's The English Beat. Blending pop, punk, ska and some reggae, the band was known for hits such as "Mirror in the Bathroom" but only stuck around for a handful of years in the late '70s and early '80s before reuniting in the early 2000s. The English Beat was also influential in the surge of two-tone ska in late '70s England. Diamond Victoria


Pentatonix
8 p.m. Thursday, July 26, Dos Equis Pavilion, 1818 First Ave., 214-421-1111, $18 and up
The Arlington natives of Pentatonix bring their brand of a cappella to Dos Equis Pavilion on Thursday night. The group dishes out all your favorite pop hits from the past few decades in a completely refreshing style using nothing but five voices. The multi-Grammy Award-winning act is on tour this summer in support of its latest album, PTX Presents: Top Pop, Vol. I, which was released a few months ago and features covers of "Havana," a medley of Dua Lipa's "New Rules" and Aaliyah's "Are You That Somebody?" DV

An alumnus of St. Mark's and Woodrow Wilson, Steve Miller returns to the area where he cut his teeth as a guitarist and singer. Miller and his band have coasted on their big hits from the ’70s and ’80s for a few decades, and that's not really a bad thing. From "Space Cowboy" to "The Joker" to "Fly Like an Eagle," these songs have been played many times, and fans never tire of them. Also expect Peter Frampton’s best known songs from his landmark live record, Frampton Comes Alive. Frampton goes on at 7:30 p.m., so plan ahead and avoid the suburban rush hour traffic. Eric Grubbs

As one of country’s biggest voices, Jason Aldean stretches the genre in unexpected directions. Atop typical country music trappings — meat and potatoes lyrics, emotive guitar, accented vocals—Aldean adds threads of soul, alternative rock, R&B, hip-hop and world music. He’s even been known to rap, such as on the single “Gettin’ Warmed Up” off his new album, Rearview Town, his strongest release yet. Power ballads meet clever fusion in Aldean's tunes, which seem engineered for big, euphoric stadium performances. Aldean might flirt with comparatively radical ideas in his arrangements, but his music never fails to feel genuinely part of country music’s rich and storied tradition. Jonathan Patrick

Renowned DJ and music producer Paul Oakenfold just returned from a stint in Russia, where he attended World Cup matches and performed a series of shows in the host cities. While there, the longtime soccer fan incorporated elements of Russian rock music and techno into his set lists with the goal of bringing into the limelight the diverse and rich history of the country's musical scene. Considering the news and, y'know, politics, it's unknown if Oakenfold will bring some of this Russian vibe into his upcoming American concerts. Regardless of the content, attendees will be hard pressed to remain calm for his sets. As he's done for decades, Oakenfold will light up the dance floor with rhythmic and mesmerizing performances that feature of bevy of musical genres and textures. The Lizard Lounge will surely be brimming with adrenaline. Jeff Strowe

Apparently, Sir Robert Bryson Hall II, aka Logic, hasn’t let the final leg of his summer tour keep him from writing new music. The 28-year-old rapper took to Twitter recently to say he’s been sitting on seven projects. It could be nothing more than a characteristically boastful statement from a best-selling rapper. All seven of the alleged projects could just be plain bad, too. But given his character and the rave reception of his latest mixtape, Bobby Tarantino II, if Logic speaks the truth, your boy is sitting on a goldmine. The Macklemore antidote hit the scene opening for the likes of Pitbull and Ludacris as they came through his home state of Maryland. His third mixtape, Young Sinatra: Undeniable, earned him his first national tour and made him a shoe-in for the 2013 XXL Freshman Class alongside Joey Bada$$, Action Bronson and Schoolboy Q. Three studio albums and two mixtapes later, and Logic is nearing the summit of the rap game. Hits such as “1-800-273-8255” and “Sucker for Pain,” helped ingratiate his complex lyricism with mainstream audiences while he kept the connoisseurs satisfied with straight rap bangers like “Dead Presidents III” and “44 More.” If you’ve haven’t already heard, let this be a wake-up call. Nicholas Bostick
KEEP THE DALLAS OBSERVER FREE... Since we started the Dallas Observer, it has been defined as the free, independent voice of Dallas, and we'd like to keep it that way. With local media under siege, it's more important than ever for us to rally support behind funding our local journalism. You can help by participating in our "I Support" program, allowing us to keep offering readers access to our incisive coverage of local news, food and culture with no paywalls.
Make a one-time donation today for as little as $1.