Richard Rawlings May Have Shaved Loyal Sally's Beards, But Their Folk Sound Is Still Growing 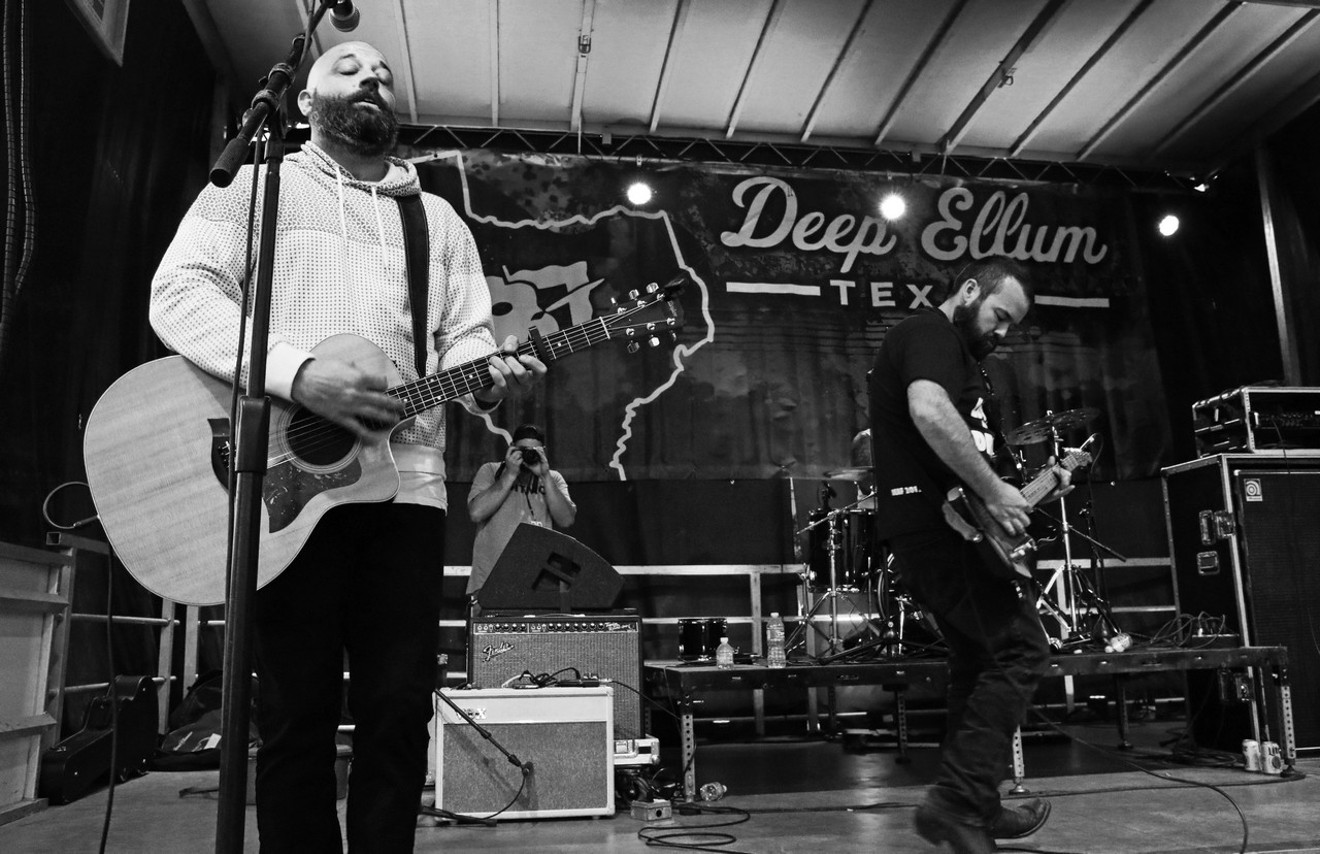 Michael Lewis (left) and Michael Lindblom (right) of Loyal Sally playing the Deep Ellum Arts Festival earlier this month. Roderick Pullum
The bromance between Michael Lewis and Michael “Bubba” Lindblom began in middle school. The Garland natives and co-frontmen of folk rock band Loyal Sally bonded in 5th grade over their first names and shared taste in music. Soon they were trying to make some of their own in Lewis' garage.

“We were like Green Day junior in middle school and high school,” Lewis says. “We played pop punk and were really into them and bands like Blink 182.”

Loyal Sally is spending a Sunday afternoon Valley of the Kings recording studio in North Dallas, recording and guzzling Tecate Light. The band is a personal favorite of Bowling for Soup frontman Jaret Reddick, and Fast 'N' Loud star Richard Rawlings once paid $20,000 just for the pleasure of shaving the band's beards.

In middle school, Lewis and Lindblom got a leg up when they managed to find a drummer who was 10 years their senior and plugged into the Deep Ellum scene. From 1998 to 2001 they lived out their punk rock fantasies performing as “New Hatt" at the Galaxy Club, Trees, Curtain Club and Insomnia.

However, as Lewis and Linblom transitioned into adulthood, other obligations got in the way of their musical ambitions. At 19, Lindblom fathered a child and got married.

But when the marriage “went south,” according to Lindblom, he began to find more room in his life for music. Eventually he and Lewis rented a house together, turned one of the rooms into a studio, and embarked on a new period of musical experimentation, which brought them to the folk sound they have today.

In 2011, they reached out to two other players to form the quartet Loyal Sally, named after Lindblom’s pet dog. They recorded a 14-track album before playing a single show.

Michael Lindblom at Valley of the Kings recording studio
Roderick Pullum
“People would come over for parties all the time and we’d perform for them at our house," Lewis says. "We printed up 2,000 CDs, T-shirts and stickers, and spent two months passing them out.”

Their grassroots promotional tactics were effective. They booked a series of shows at Curtain Club, which brought out people in Loyal Sally merchandise who knew their songs.

Today Loyal Sally's roster consists of drummer AC Capers and bassist Lucas Weiss, while Lindblom and Lewis share lead vocalist and guitarist duties. Lately they've been focusing on improving their songcraft which has already matured a great deal from their days in Lewis' garage: They combine minimal and infectious lyrics with well constructed hooks and melodies.

The band attributes much of this growth to their experiences working with Valley of the Kings' engineer and producer Billy Syn.

“I’ve had a chance to work with them since they were in the transition stage," Syn says. “They’re serious about their music, they love being in the studio collaborating with others and when they’re experimenting that’s when they’re at their best.”

Loyal Sally have also found a kindred musical spirit in Bowling for Soup’s Reddick. The bands connected after Bowling for Soup posted to their Facebook page that they were looking for a band to open for them in Denton.

“I shared it on our page and all of our fans bombarded their post. He messaged me asked if we wanted to do it and we played the show the next day," Lewis says. "When we finished our set Bowling for Soup got on the mic and said Loyal Sally is officially our new favorite band in Dallas.”

After the show, they stayed in touch. Reddick even produced a soon to be released Loyal Sally single. And Reddick isn't the only high profile supporter the band has attracted.

Rawlings is also a fan, although he's more interested in their facial hair than the music. In recent years, Lindbloom's and Lewis' navel-length beards have provided something of a signature look for the band.

Loyal Sally preparing to play for an intimate crowd at a SoFar Sounds show.
Roderick Pullum
They were even included in the first installment of Brent Baxter's photography book, Best Beards in Dallas. But that all changed February 18, when they played a show at the Rustic celebrating the release of Baxter's second book of beard photos.

“It’s about time for us to perform. Richard Rawlings, who was featured in the second installment of the book, is hyping the crowd up and talking to them about the Movember Foundation, because a portion of the proceeds from the book were donated to them," Lindblom recalls. "He looks back at us and says I’ll donate $10,000 if you shave your beard off. Then he says I’ll pay another $10,000 for [Lewis'] beard.”

With knots in their stomach, the pair agreed to let Rawlings himself with do away with their beloved facial hair in the name of charity. They say it was like losing two members of the band

This kind of flexibility and openness is characteristic of the band. They know not to put all their eggs is one basket. That's why they have numerous side projects, including voiceover work (most recently for a children’s book called Serious Henry); writing jingles; and hip-hop group, Boxer Brains, which was invited to open for Ghostface Killah earlier this month.

But Loyal Sally is their central focus, and particularly the April 28 release of their new EP, Eureka Moment, which they'll celebrate the same night with a show at Sons of Herman Hall. Bum Lucky and The High Moons will share the bill.

In promoting the album, Loyal Sally have turned to the same grassroots methods that have served them will in the past. They've been hitting the SoFar Sounds circuit the last few months — small secret shows accessible only by RSVP — and performed at the Deep Ellum Arts Fest

“We were in the studio until 5 a.m. recently just fine tuning things and putting the finishing touches on the project so we’re really excited to get it out there,” Lewis says. Lindblom adds that they have other music that didn't make the cut for the album ready to go, too: "This is going to be a good year for us."