Jumbii of Jumbii Soul Jumbii Facebook
The drum and bass scene in Dallas has a fire underneath it, and Jumbii Soul is just one example. Jumbii Soul is a collaboration between DJs and producers BigESoul and Jumbii. For this week's Observer mixtape, they're in full-blown drum and bass mode although their music backgrounds have led them to explore a variety of genres. These two scene vets clue us in to their journey as DJs and what brought them together.


How did you get started deejaying? What drew you to it?

Jumbii: I had always been fascinated with electronic music. When I was 14, a friend introduced me to Movement in Still Life by BT. It had such a profound impact on my life at the time, and I began playing around with a boombox and a Walkman with computer speakers, trying to do my own DJ mixes at home. And in 2006, I got laid off from my job. I was back in school at the time and figured I would be a DJ. I have always been the type of person who would just get out and do something if I felt passionately about it. I found a pair of Technics in a pawn shop and bought a two-channel mixer that had broken faders from a friend. I then went to R-Type Records in Fort Worth and met DJ Format, who ended up taking me under his wing. A few months later, I joined the 12inchpimps, and the rest is history.

BigEsoul: It all started at renegade parties and warehouse raves for me in the late '90s. I fell in love with house music. My friend Marc Vickers had all of the equipment we needed to practice in his bedroom. That was such a huge advantage. My friends and I had a tight clique. We all grew up together and had the same passions, so we started deejaying and throwing our own events. FBK was the name of our crew. We had taggers, B-boys and DJs. All of the elements. We had a very fun and successful run together. We are all currently doing our own thing but remain close friends. I have been playing out for at least 15 years now and don’t plan to stop anytime soon.

How did you start working together? Is there an advantage to pairing up?

Jumbii: Eric ["BigEsoul" Quintero] and I were eating dinner one night and decided to go to my studio and start working on some music. In about three hours, we had already put together our first tune. When things come together that fast, you know there is chemistry. We enjoyed it so much that we decided we needed to put this DnB [drum and bass] project together, and it has been going very well.

How was this mix made? Is there a theme?

Jumbii: This mix was made with love for the music. DnB has always had this element of love and feeling good that has drawn me to the genre. We centered it around our own production and created it from there. [We found] songs that spoke to us and created the right vibe.

What is your involvement with activesessions.fm?

BigEsoul: I joined activesessions.fm late last year. Joe MxMind welcomed me into the family, and I host a night on the station every other Sunday at 7 p.m. featuring DJs from Dallas and around the world. It’s nice to have an outlet like ASFM to give other DJs a chance to share their music.

What was your most significant musical experience of the past year?

Jumbii: Playing Still Dream Fest and then Wormhole Wednesday in Oakland after my first release with Mallabel Music.

BigEsoul: Going to the Day for Night Festival in Houston last December was pretty dang awesome. Such a sweet lineup and experience. 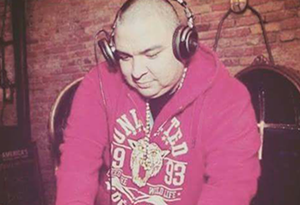 Eric "BigEsoul" Quintero of Jumbii Soul
Price Voss
Do you have a musical background?

BigEsoul: I dropped out of high school, and my dad paid for some music theory/guitar lessons for me to take. He also gave me my first guitar, and I have been playing ever since. Guitar is my first love when it comes to any type of music, and I think it will show in my future production.

How did you get involved with production?

BigEsoul: Like most DJs, I got tired of playing other people's tunes. Eventually, I got curious and wanted to make my own ideas come to life. I started taking Ableton lessons about six years ago, and I continue to learn the tools of production. It’s exciting to learn and very satisfying to be able to create your own music.

Jumbii: After I got sober, I knew that the next step was production instead of just deejaying. And like everything else in my life, I just went for it. I made a bunch of really bad music until some things started sounding right.

What releases have you done and what labels have you worked with?

BigEsoul: I have no official releases, but hopefully that changes this year with Jumbii and I working on some stuff. I have done some guitar work for my house music mentor, Roy Davis Jr., and hope to be able to continue working with him and release something cool soon.

What do you use for production?

Jumbii: Ableton and an endless array of plug-ins.

BigEsoul: For software I love using Ableton. It’s so perfect for the live instrument ideas I have. I also rewire Reason into it and run some of their old synth sounds. As far as hardware goes, I have a couple of go-to midi keyboards I use for melody making, and I love adding live guitar to anything I make. It’s sort of a signature sound I want to have in all of my music.

Are there any producers or DJs in particular who have your attention?

BigEsoul: Producers? Heck yes. Com Truise is up there for me. SG Lewis has been doing some really cool stuff. Nitemoves (drummer from Tycho) also has my attention lately. So many I could name that aren’t necessarily dance music. My Spotify playlist is really diverse.

Where do you like to dig for tracks (digital or actual store)?

Jumbii: I try to get most of my music from producer friends.

BigEsoul: Thanks to the activesessions.fm show, I have been fortunate enough to get some good promo packs from friends and producers who I have worked with lately. You can catch me lurking on Beatport from time to time. SoundCloud is also pretty useful.

What local DJ nights or gigs do you frequent?

Big Esoul: TwoTone at Wits End or anything that activesessions.fm and Basshead Society are doing lately.

What music gets your attention outside of dance music?

BigEsoul: I have been highly influenced by synthwave, electropop, future bass and chillwave-type music the past year. I recently got sober myself, and it’s opened up another world of music to me. Tycho is by far my favorite band right now. They are amazing. Anything with synths and bass has my attention right now.

What gigs or releases do you have coming up?

BigEsoul: Not Another Halloween Party 2 festival in November and activesessions.fm has some events coming up soon.