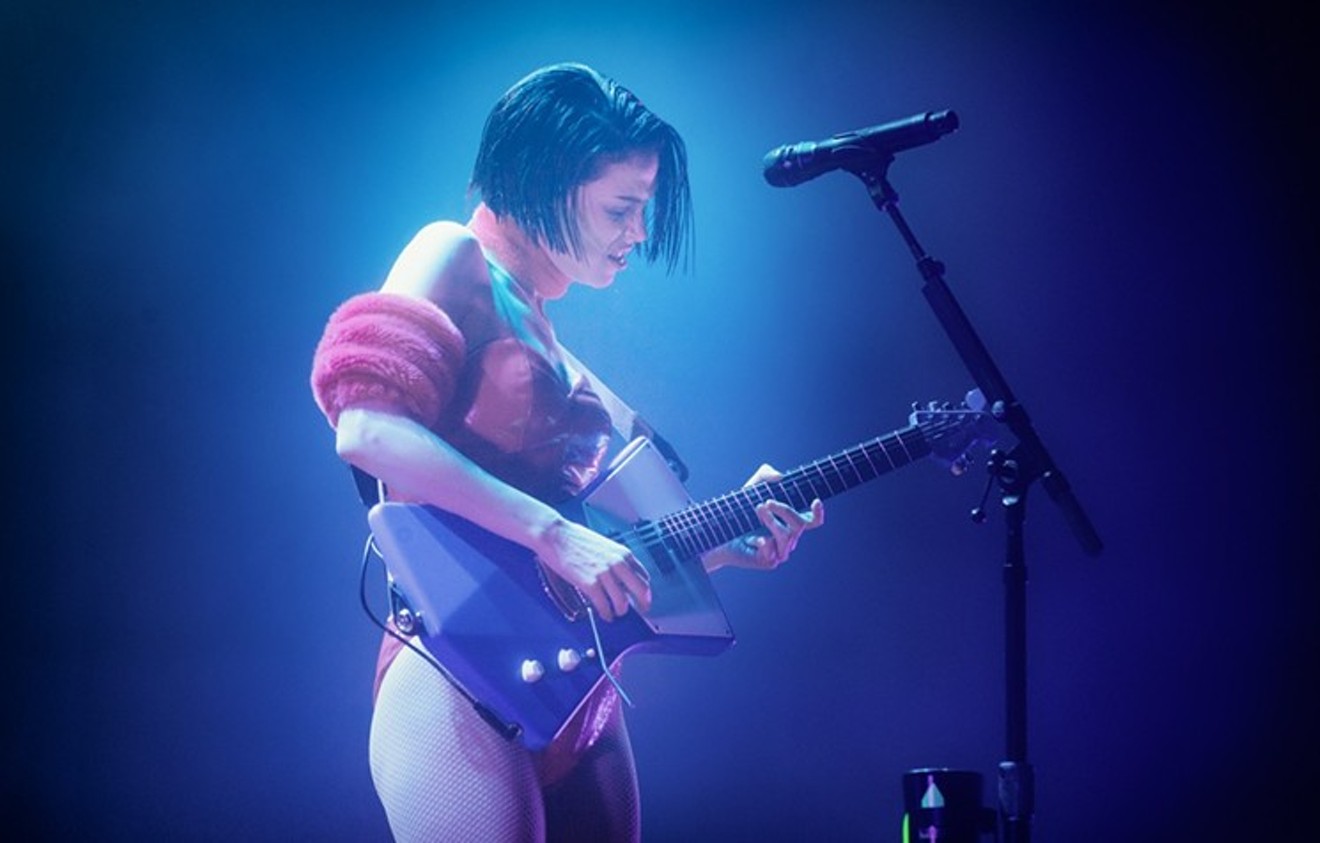 Everything indie rock icon Annie Clark, aka St.Vincent, touches turns to SOLD! Mike Brooks
St. Vincent plays well with others — very well. The enigmatic Dallas-raised performer has collaborated with a wide array of musicians, from pop princesses to indie rock titans to grunge gods. Just this week, she was invited to fill Kurt Cobain's Converse at a benefit show with Dave Grohl and Krist Novoselic of Nirvana, and Beck. Boasting an impressive versatility, the multitalented songstress can seemingly do it all, both onstage and behind the scenes. So to help honor Dallas’ patron saint of indie pop, we’ve compiled our 10 favorite St. Vincent collaborations. 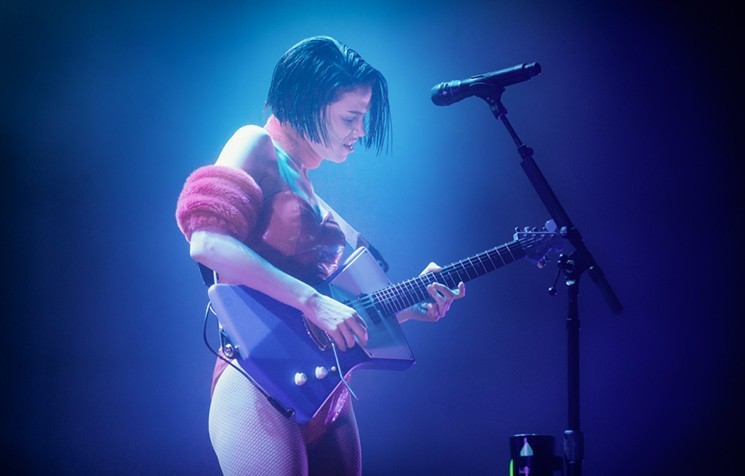 Everything indie rock icon Annie Clark, aka St.Vincent, touches turns to SOLD!
Mike Brooks
Dua Lipa and St. Vincent, “Masseduction / One Kiss”
Damn, don’t watch this one at work. For this collaboration, St. Vincent and Dua Lipa set the 2019 Grammys ablaze in a white-hot live performance. Our gal St. Vincent opens with “Masseduction,” an electro-pop banger off her 2017 album of the same name. Then, Dua Lipa saunters onstage to join in the chorus before the song seamlessly streams into her 2018 dance-pop hit “One Kiss.” The sexual tension between the two sirens is palpable during this steamy set. Adding to the greatness is the moment when St. Vincent slays a guitar solo on her signature Ernie Ball Music Man electric. As far as collaborations go, this one’s definitely the hottest. Yeow.

David Byrne and St. Vincent, “Who”
Sometimes when two musicians sit down to collaborate, it can go well. Other times, though, it can really go to shit. Take the confusing Jonas Brothers and Common merger, or the truly terrifying T-Pain and Taylor Swift union where the latter attempts to rap. Well luckily for us, when frequent collaborators St. Vincent and David Byrne produce art together, the results never disappoint. Take “Who” for example. The off-center single from St. Vincent and Byrne’s 2012 album Love This Giant is objectively brilliant. The two somehow manage to marry complex melodies, syncopated horns and a funky beat into one insanely infectious pop song. But, considering the level of talent we’re dealing with here, that should come as no surprise.

Taylor Swift, “Cruel Summer”
OK, all right. Yes, we may have dragged Swift’s subpar rapping skills in the last entry. But she totally nails it with her single “Cruel Summer,” co-written by St. Vincent. With its ’80s-inspired synths and insanely catchy melody, it’s just the kind of song that’ll help to thaw out this unwelcome winter weather. Swift impresses with her mellifluous vocals and impressive range, and the production is as lush as a pre-Bolsonaro Amazon. Jack Antonoff, who co-produced Masseduction with St. Vincent, earned a co-writing credit on this one, too. Overall, this is a Grade A+ summer single. The only thing that would have made it better is if St. Vincent contributed vox to it, too.

Sufjan Stevens, “Mystery of Love"
Dang, the saint’s back at it again with a fierce power stance at the 90th Academy Awards. In this tranquil live performance, St. Vincent joins Sufjan Stevens in playing his song “Mystery of Love” from the movie Call Me By Your Name. (The film by Suspiria director Luca Guadagnino was nominated for the Best Picture category at the 2018 Oscars.) What’s so great about St. Vincent is that she has an innate sense of when to shine and when to lay low. Here, she plays electric guitar and contributes sparse backing vocals. And she seems fully comfortable letting Stevens enjoy the limelight. Brava.

Nirvana, “Lithium”
Kurt Cobain would definitely be proud of this St. Vincent-led Nirvana cover at the 2014 Rock and Rock Hall of Fame Ceremony. With a shock of white hair, our gal embraces her inner grunge goddess during a killer rendition of the 1991 classic “Lithium.” It makes total sense St. Vincent would ace it, after all. She once toured with the Polyphonic Spree, another Dallas-based band that absolutely nails its own “Lithium” cover. It might be a long shot, but if Nirvana were to ever get back together, St. Vincent should be their frontwoman. Seeing that the band invited her back for their Hollywood show last week, it’s well within the realm of possibility. Fingers crossed.

St. Vincent and Andrew Bird, “What Me Worry”
As Owen Wilson would also say: “Wow.” And as Gordon Ramsay would also say: “Wow. Wow, wow.” This intimate living room set featuring St. Vincent and multi-instrumentalist Andrew Bird is replete with the stuff that heaven must be made of. With Bird on violin duty, St. Vincent executes complex vocal melodies with ease while she fingerpicks her electric guitar. And even though the cozy room looks pretty packed, St. Vincent doesn’t seem to notice. In fact, it’s almost like she’s just singing to herself with closed eyes and a sweet, slight smile. If you weren’t already in love with her by now, this is the song that’ll do it to ya. Don’t say you weren’t warned.

Fiona Apple and St. Vincent, “Money Changes Everything” (Cyndi Lauper cover, originally written by The Brains’ Tom Gray)
We might not be hearing a more studio-polished version of this song any time soon, but that’s cool. Fiona Apple and St. Vincent still delivered the goods in a live cover of “Money Changes Everything,” a song popularized by ’80s sugar pop princess Cyndi Lauper. The two look like they’re girls who just wanna have fun in this 2017 video from Marfa’s Trans Pecos Music Festival. Apple stomps around the tiny outdoor stage, delivering the lyrics with her trademark vocal ferocity. Meanwhile, St. Vincent sticks to the background, filling in on acoustic guitar and backing vocals. Sure, it’s a pretty short video, but what it lacks in longevity it makes up for in marvelousness.

Justin Vernon (Bon Iver) and St. Vincent, “Roslyn”
Phew, well if this one doesn’t pull at the ol’ heart strings. “Roslyn” is a gorgeous collaboration between St. Vincent and Bon Iver’s Justin Vernon. The pair met at Bonnaroo in 2009 and eventually decided to collaborate on “Roslyn,” a song Vernon had been workshopping. The track landed on the Twilight: New Moon soundtrack, a fact that probably helped elevate the poorly received film in at least a few critics’ eyes. It definitely sounds like a Bon Iver tune, but St. Vincent adds dimension with her angelic harmonies. The two songwriters sound like they were made to duet; each of their voices shine, brave in their vulnerability.

Talking Heads, “Burning Down the House”
Yes, we’ve listed another David Byrne and St. Vincent collaboration. But this time they’re performing under the proper Talking Heads moniker, so it still counts, OK? Watching this version of one of the Heads’ ultimate cuts can only be described as delightful. Just fast forward a minute into this video — that dude gets it. Here, a snappily dressed Byrne ’n’ St. Vincent sing and play their respective guitars in front of a full-blown horn section. True to her Southern roots, St. Vincent even gifts us with a sweet, lap steel-inspired solo. It’s an absolute, balls-to-the-wall reincarnation of the classic. They say it’s hard to improve on perfection, but these cats somehow managed to do it here.

Swans, “Screen Shot”
You’ve gotta listen closely — really closely — for her on this one. St. Vincent contributes vocals to the 2014 single “Screen Shot” by experimental rock lords Swans. Sure, this song is a few shades darker than most St. Vincent collabs, but it still freakin’ slaps. A nefarious-sounding bassline opens before other instruments file in, gradually adding cacophonous noise behind bandleader Michael Gira’s monotonic mantra. Throughout the 8-minute track, the listener feels like they’re stumbling upon a ritualistic human sacrifice. It’s the last place one would expect to hear St. Vincent’s pure vocals, but that’s exactly what makes “Screen Shot” so great. Plus, St. Vincent tweeted in 2014 that working with Gira was “a dream come true,” so you know she made it out of the booth alive. Thank goodness for that.
KEEP THE DALLAS OBSERVER FREE... Since we started the Dallas Observer, it has been defined as the free, independent voice of Dallas, and we'd like to keep it that way. With local media under siege, it's more important than ever for us to rally support behind funding our local journalism. You can help by participating in our "I Support" program, allowing us to keep offering readers access to our incisive coverage of local news, food and culture with no paywalls.
Make a one-time donation today for as little as $1.