Gathering of the Juggalos 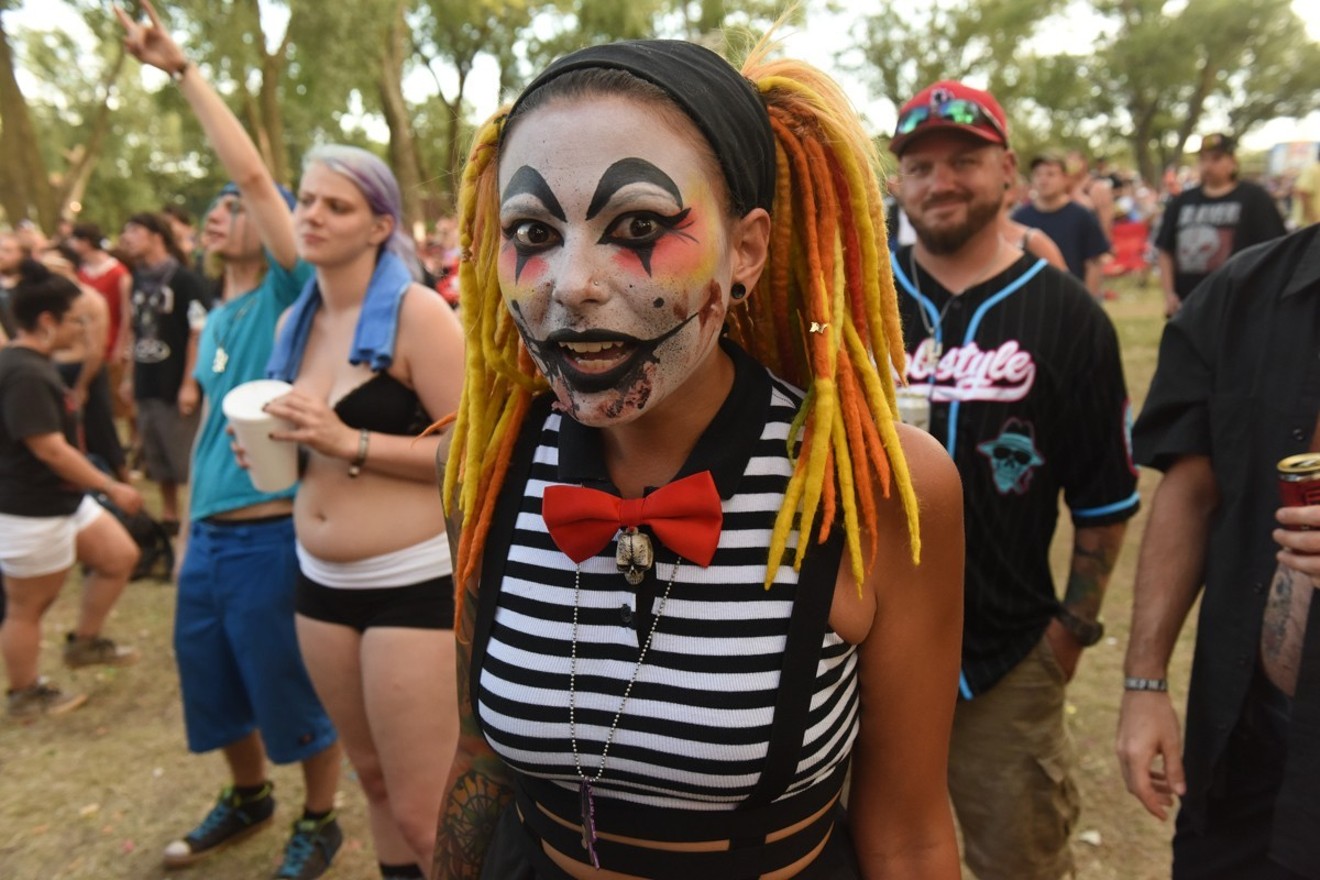 “There’s tents set up,” the KOCO guide noted helpfully. “There’s some slides,” he continued, seemingly unsure whether he was narrating a Not in My Backyard stakeout or an infomercial. “They’re pretty intense.” This went on for more than 30 minutes.

Meanwhile, on the other side of the split-screen Facebook feed, a real-time poll hinted at something more foreboding: “Are you concerned about the Juggalos’ Gathering?” A link in the caption suggested maybe you should be: “See what law enforcement officials have to say.”

If you're reading this from the relative sanctuary of a blue state or any other place where the major cultural centers aren’t Walmarts or megachurches, it’s easy to forget that any grown adult still feels “concerned” about Insane Clown Posse loyalists gathering in a dilapidated campground. But there are still population clusters in this broken nation that are threatened by the idea of lost kids deriving a sense of joy and inclusion from scrubby costumes, colorfully crude vernacular and white Midwestern rapping. And Oklahoma City is one of them.

In its previous 17 years, the Gathering has taken place in seven locations throughout three states, Michigan, Ohio and Illinois. Over the last decade, it’s faced initial resistance from those communities, but that skepticism usually wanes after a day or two.

“Every time we come into a new town, it’s always the same,” Jumpsteady, the Juggalo persona of Violent J’s brother and Gathering co-founder Rob Bruce, told a packed tent of sunburned Juggalos later in the week. “Everybody’s up in arms; they’re buying guns — they think Juggalos [are] gonna be running through the streets, tipping over cars and shit. But when we get here, then they start to see that ain’t the case, and [the police] start to ease back.” 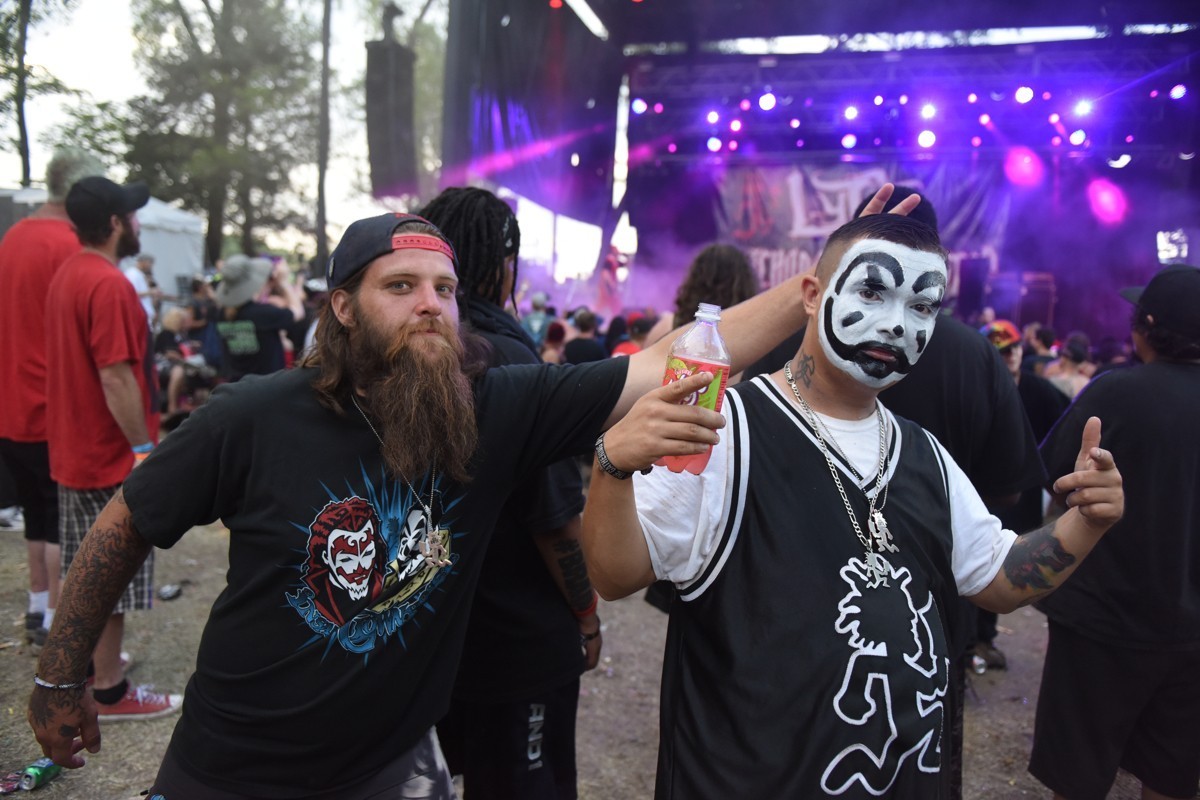 Do these guys look scary to you? If you answered "yes," you're probably an Oklahoma law enforcement official.
Nate "Igor" Smith
In other words, there’d be checkpoints and visible patrols and state-cop mean-mugging for the first day or so, but law enforcement would give them some breathing room after seeing that the Gathering was a self-contained surreality and that Juggalos were more interested in shirtlessness and hooting like sick owls behind the gates than ravaging the streets.

But this was the first time the psycho-porn shantytown had ventured into the Bible Belt. Simple logistics for ICP shows have become more difficult since the FBI publicly labeled Juggalos a gang — a branding Insane Clown principals Violent J and Shaggy 2 Dope plan to protest with a Juggalo March in Washington on Sept. 16 — and the Oklahoma City Police Department was’t having any of it.

“We’re aware of what’s going on there, and we’re obviously going to be taking appropriate measures because the safety of the public is what we’re there for,” department spokesman Gary Knight said publicly days before anyone stepped foot on site. “Without going into details, it’s something that we are addressing.”

Behind the scenes, the OKCPD threatened to shut down the event before it began. Once the festival got underway, the specter of overzealous law enforcement manifested in a kind of paranoia and swirl of rumors that ranged from believable to uproarious. Allegedly, Juggalos waiting outside the premises, hoping to land free tickets from generous homies with extras, were ticketed for trespassing; people were nabbed for marijuana; a woman got arrested for toplessness; undercover cops posed as medics.

At one point, someone started a rumor online that Violent J was hauled off for punching a cop. (He was not.) By far the best rumor: “A Juggalo was arrested for showing a cop his butthole.” (I wanted this to be real, dear reader, but alas, it was not.)

What can be said with certainty: This was a decidedly neutered Gathering. Nudity, formerly as common as face paint, wasn’t permitted; some women improvised by fashioning pasties out of stickers. Visible drug sales were strictly forbidden. Long gone were the Gathering days when you could borrow a Sharpie, handwrite a list of substances your crew had for sale and hang the menu on your tent with Band-Aids.

Even smoking a blunt had to be a relatively discrete act. Liquor wasn’t allowed on site, either. Beer brought into the venue had to be concealed in bags. Although temperatures reached 100 degrees, coolers weren’t allowed by the main stage area.

Some restrictions seemed punitive with little regard for logic. Lost Lakes’ closest neighbors are a concrete company, a used-car salvage yard and a scrap yard. The venue has upcoming dates booked with the kind of ribcage-rattling dubstep DJs (Excision, Datsik) whose bass music sounds like Transformers copulating. Yet noise ordinances were strictly enforced for the Gathering. According to one Lost Lakes affiliate, the venue was ticketed every time sound decibels went out of compliance. That meant Juggalos were frequently chastised for playing music at their campsites, and a sound curfew cut short two late-night sets.

A Juggalette expresses the sentiment toward Oklahoma at this year's Gathering.
Nate "Igor" Smith
But more than anything, the real problem, according to the Juggalos, was that there was an overarching presumption of guilt before innocence. That’s what deeply upset Carl Kovin, a 26-year-old from Lakewood, Colorado.

On Saturday afternoon, the Gathering’s final day, Kovin was standing in a tent, waiting for Violent J and Shaggy 2 Dope’s annual seminar — a kind of State of the Juggalo Union address — wearing a Mario Bros. hat and a fake mustache attached to blue sunglasses. The first night, he’d been “messing around” with a laser pointer — at the Gathering, props like megaphones and laser pointers are impish icebreakers — “shining it on people and in the trees,” he says. “Then these two security guards grabbed me and said, ‘You need to come with us right now.’ But they wouldn’t tell me where I was going — or why. They scared the shit out of me.”

Kovin says he didn’t know that someone had been shining a laser pointer at planes from the parking lot across the street, and security had fingered him as the culprit. Eventually, after he’d been thoroughly interrogated, he was released.

“The way they treated me? They treated me like garbage,” said Kovin, tearing up. “The Gathering is my Christmas — when I get home, I start saving for the next one — and this year broke my heart.” His bottom lip quivered under the plastic mustache. “The Gathering does not ever need to come back to Oklahoma.”

That seemed to be the consensus. “This sort of treatment is exactly why we’re fucking marching,” Violent J said during ICP’s seminar. Later that night, a main-stage host asked the crowd, “How’s Oklahoma treating you?” and hundreds roared back, “Fuck Oklahoma!” The demand "take the gathering back" appeared in big letters on one of the shower trailers — and below, in a smaller script, "free the boobies."

Nate "Igor" Smith
In the end, the Gathering wasn’t shut down. ICP played a full headlining set, complete with Faygo showers, and the Juggalos whooped joyously.

On Monday morning, Knight, the OKCPD spokesman, hadn’t heard about any arrests — KOCO later reported that there were eight — and that alone spoke volumes. “It was actually pretty peaceful out there,” he said.

The only thing shut down was the reviews section of Lost Lakes’ Facebook page, where Juggalos went to vent their frustrations as they headed home. “This place just sucks the Ultimate Pee Hole!!!” read one comment. “I’d rather Gather in a Walmart parking lot,” read another.

“I will literally avoid the entire state of Oklahoma for the rest of my life,” promised a Juggalette by the name of Aarika Kross. “Wack.”

KEEP THE DALLAS OBSERVER FREE... Since we started the Dallas Observer, it has been defined as the free, independent voice of Dallas, and we'd like to keep it that way. With local media under siege, it's more important than ever for us to rally support behind funding our local journalism. You can help by participating in our "I Support" program, allowing us to keep offering readers access to our incisive coverage of local news, food and culture with no paywalls.
Make a one-time donation today for as little as $1.
Camille Dodero
Contact: Camille Dodero