In Bed with Richard 'Picnic' Escobedo 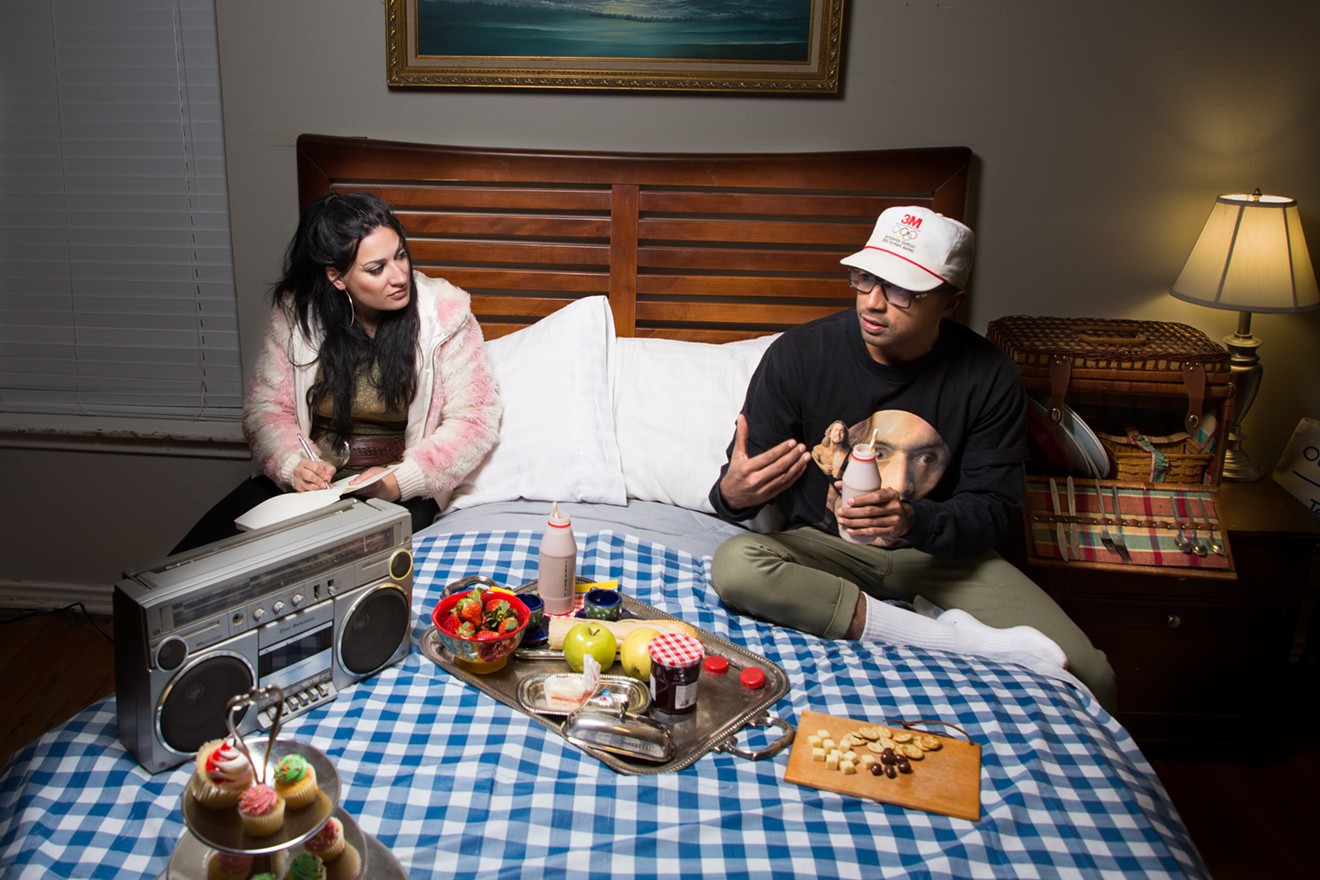 "In Bed With" is a series in which we delve into the homes and personal lives of Dallas music industry professionals.

His East Dallas house, where he and his Star Wars memorabilia have lived for seven years, has hosted royalty — the Queen of Neo-Soul Erykah Badu, with whom he’s worked since 2006.

When it came time to lie in bed with him for our "In Bed" series, naturally the Observer set up a picnic. The concept is a pretty obvious one, but Escobedo is still amused by the small feast. “Nobody’s ever done this,” he says, before toasting with chocolate milk.

Escobedo remembers first being introduced to Badu and her keyboardist, RC Williams, by Grammy-winning producer Symbolic 1, whose ear he caught back when he was doing beat battles. Williams had been called to curate a group of super-producers for Badu, now called the Cannibanoids.

”Honestly, that was a moment for me because I’m from Wichita Falls, from a really small town,” Escobedo says of the first meeting at the Greenville Terrilli’s, “so being able to really take advantage of meeting someone like Erykah and collaborate with her on a lot of different projects was kind of a dream come true.”

Escobedo's fridge
Exploredinary
Those projects included touring with Badu for a year and a half, first as a photographer and on her social media team. Later, after Badu’s drummer was unable to make it overseas, Williams persuaded her to move the percussionist to drums and put Escobedo on percussion, which he’d studied in high school.

“We basically went around the world twice,“ Escobedo says of tour life. “I have so many crazy stories, man. One thing I can say is that it was like going to music industry college.”

In Paris, he met Prince, who played on a bill with Badu and Janelle Monáe.

Escobedo says he also played a part in co-directing the controversial music video for “Window Seat,” in which Badu famously strips off her clothes while walking around Dallas’ Dealey Plaza in the spot where JFK was murdered.

“That was her idea," he says. "I was thinking she was gonna chicken out. No way she’s gonna get naked in front of all these people. But she did it.”

He says the success of the song prompted Badu's label, Motown, to expand her domestic tour to an international one.

Escobedo worked with Badu on musical direction of the Comedy Central series Legends of Chamberlain Heights, which ended in July. He says they plan on continuing to produce TV scores together and that they became particularly close as she came over to record her voiceovers for the series.

“She knows my family; I know her family; she would bring Peachy treats,” he says, referring to his dog.

His favorite Badu moment was when she asked him to work with her at her grandmother’s, where she cooked dinner.

“It was just them two,” he recalls. “What celebrity does that? She can do whatever she wants, and she’s at her grandmother’s making dinner.”

Escobedo says he never learned Spanish because “he gets too distracted.” His mother is Mexican and manages five Subway restaurants (“I get a lot of Subway back home,” he says), and his father is African-American and runs a car shop.

“I’m pretty good with cars. I literally have a garage in the back,” he says.

He describes his parents as “both Air Force babies,” and proudly displays pictures of his little sisters on his fridge, next to pictures of him and Badu.

Escobedo recently introduced his father to Williams and told him about the time Pharrell came into their dressing room looking for the keyboardist.

Escobedo's upcoming album is named for his dog, Peachy.
Exploredinary
“I’ll never forget it,” Escobedo says. "We were in Baltimore, and Pharrell goes up to RC and he’s like, 'I just want to say I had a conversation recently with Questlove about you, about Erykah Badu’s keyboardist named RC Williams, and he said you’re one of the top three keyboardists in the world, and I wanted to come down and meet you because he was right — you are hands-down one of the best I’ve ever seen.'

Escobedo, who’s worked with artists such as Rick Ross, Kid Cudi and Devin the Dude, first learned to produce beats through a PlayStation game called MTV Music Generator as a junior in high school, when he was in band and writing music for classmates.

“It kind of boosted my confidence,” he says of the contests he participated in when he was first starting out. “I got introduced to the culture and fell in love with it and showcased my stuff anywhere that I could. I think that’s where I garnered a lot of respect from S1, who, honestly, that dude really changed my life.”

Escobedo studied video production and photography at The Art Institute of Dallas, where he earned a full scholarship after winning a contest. “I was gonna go to the University of Phoenix to study architecture and go a completely different direction in my life,” he says.

He submitted a 12-minute short film he’d written and directed, and he'd involved his whole town, even its police department, in the making of the video. He believes it was his resourcefulness that impressed the judges.

Today, he’s still part of music duo Bootyfade with DJ Sober (“We have a whole project we’re sitting on right now; we just haven’t gotten down to releasing it,” he says) and focusing on DOWN, the creative agency he runs with partner Jordan Smith, who’s known for his 3-D photography.

“It’s all multimedia based,” Escobedo says of DOWN. “It’s all based on video, photography mainly.”

Escobedo is a friend and collaborator of Erykah Badu.
Exploredinary
DOWN works on an investigative show for WFAA-TV called The Originals, and also creates content for Badu. It produced a video of celebrities such as DRAM and Young Thug wishing her a happy birthday before her birthday show at Bomb Factory.

“Erykah’s been very instrumental in trying to help me get this off the ground and supporting,” Escobedo says.

His upcoming solo album, set for release later this month, is named after his restless dog. Peachy was recorded partly at his home studio, which is guarded by collectible toys, and partly at Klearlight in Mesquite.

In addition to Badu, the album features guest musicians Blue, the Misfit; Bobby Sessions; and singer Sarah Jaffe, who plays drums on a track. He describes the bass-heavy album as “N.E.R.D meets neo-soul."

"It has some funk elements. ... It’s absolutely not hip-hop,” he emphasizes. “I kind of wanted to challenge myself on this one.“

He got the name Picnic from his uncle Freddie, who nicknamed all the kids in his family.

“I fucking hated it as a kid,” he says. “But because [Freddie] was my little league football coach, all the other kids on the team I also went to school with, so of course they called me Picnic in school. No one knew why.“

He never found out.

“He passed away two years ago,” Escobedo says of his uncle. "I asked him literally on his deathbed, 'Why did you name me Picnic?' And he looks at me and says, 'I don’t know.'"

Escobedo says he embraced the nickname once he was trying to come up with a producer name. For a while, he went by Picnictyme.

“The 'tyme' was something I added for Google purposes because picnic.com wasn’t available," he says. "With this album, it’s just Picnic.”