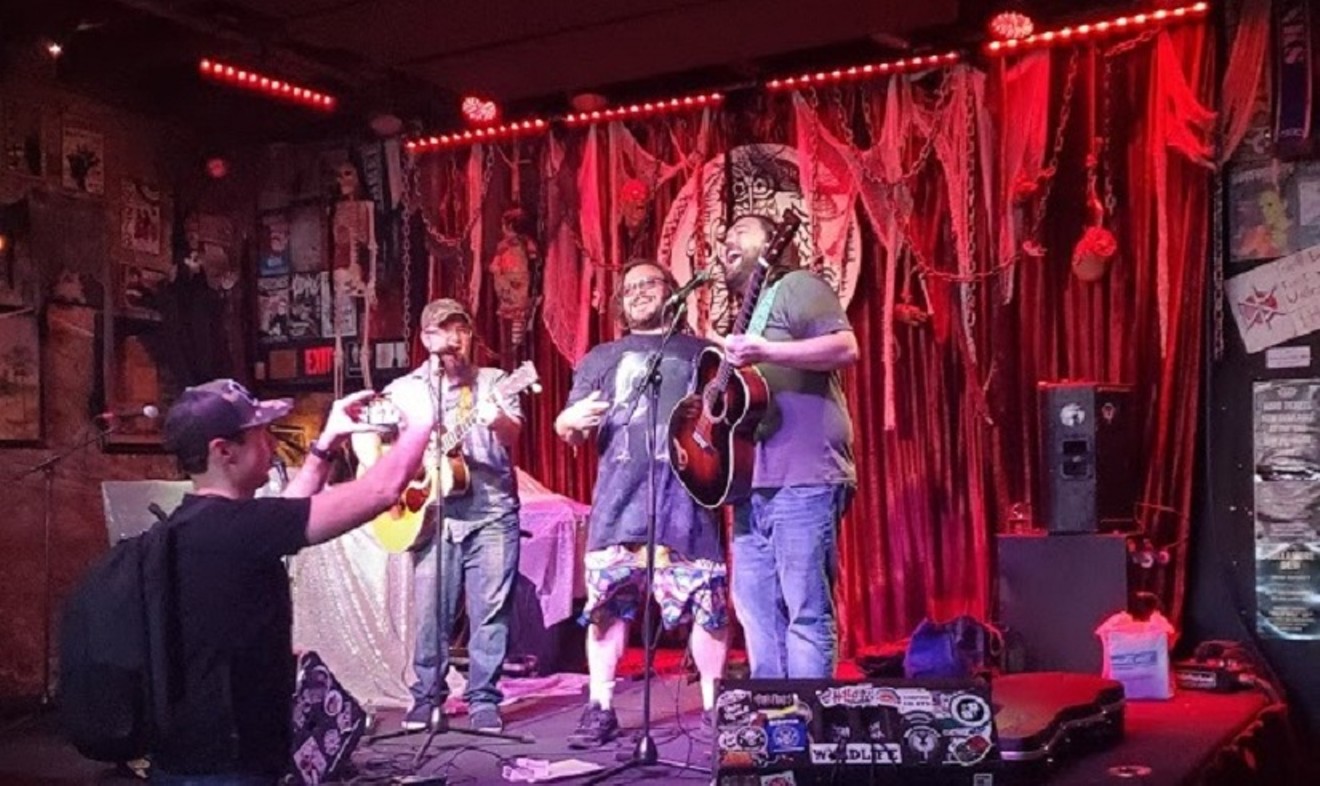 Tenacious D members Jack Black and Kyle Gass doubled the awesome on Saturday night, when they joined a Dallas Tenacious D tribute band onstage. Megan Pavey
If Tenacious D is the “greatest band on Earth,” as they proclaim, then — naturally —Tenacious NR/CD is Earth's greatest cover band. One could say, then, that this past weekend, the two greatest bands in the world came together for one song in a Deep Ellum bar.

Tenacious D, the comedy rock duo consisting of actors Kyle Gass and Jack Black was scheduled to play a sold-out show at The Bomb Factory on Saturday night. But it seems the pair couldn’t wait to hit the stage, so a few hours before their concert, around 5:45 p.m., they hopped over a few blocks to a smaller venue, Three Links on Elm Street, where a Dallas-based Tenacious D tribute band, Tenacious NR/CD, was hosting a “pre-party” to commemorate the occasion of Tenacious D's show.

Black, who's starred in now comedy classics like School of Rock and Nacho Libre, made headlines earlier this year when he announced a songwriting collaboration with Jack White in a pairing fittingly named "Jack Gray." Tenacious D released a vinyl album, Tenacious D Blue Series 7’’, produced by White, on Oct. 11, and the band is on a nationwide tour, which included the Dallas stop at Bomb Factory.

Nick Russo, who's also the drummer for the band Duell, says he first created Tenacious NR/CD a little over four years ago with fellow member Casey Dennington, whom he's known since middle school. Russo says the idea for the band came about when he jokingly told a Weezer cover band member that he would open for his show as a Tenacious D cover band and, eventually, the idea morphed into a working tribute band.

The first show NR/CD played was also at Three Links, and the band has played sporadically throughout the years, usually for Halloween shows, and once even opening for musician Creed Bratton, who's best known as the ridiculously mysterious Creed from The Office.


"I have a feeling that Jack may not have remembered all the lyrics to the song because he leans over to Kyle at some point and kind of whispers in his ear." — Tenacious NR/CD's Nick Russo

Russo approached venue owner Scott Beggs about putting on a pre-Tenacious D show, he says, for the fans who hadn't been able to purchase tickets to the sold-out show. Or, perhaps for those who just couldn't get enough Tenacious D and needed to pregame through the tribute band.

This past July, Russo saw Tenacious D playing at Colorado's Red Rocks festival, and an online friendship of sorts sprang with the band.

"I had taken some pictures at the show and I tagged some of the backing band members, and they all kind of responded and said 'thanks, cool pics', whatever, through Instagram, and I had casually been messaging with their bass player," Russo explains.

After he set up the Deep Ellum show for Saturday, Russo says he sent a message to the band's bass player, John Spiker, inviting the band to come by the show.

"[Spiker] was like 'that's awesome man, we'll try and make it over, just remind me whenever it gets closer and we'll see what we can do,'" Russo says Spiker responded.

But Russo, who sings Black's lyrics in NR/CD, says he wasn't sure if any of the band members would actually stop by, or whether Spiker was just being polite, but he sent the reminder message regardless. Spiker responded, "Some form of our group will be there, we'll see you at the show," Russo says Spiker wrote back.

Jack Black and Nick Russo singing Tenacious D's "39."
Megan Pavey
"I thought maybe he was just trying to pacify me and let me know that he was listening and there might be a chance that some of their backing band members might come over, but never did I think that Jack and Kyle would come by," Russo says.

But, come by they did. Russo says he and Dennington were in the middle of their hourlong set when he saw the band's drummer and Spiker walk in, quickly followed by two golf carts that pulled up to the venue's doors, as the crowd took pictures, which tipped him off.

Russo says he had saved a song on the set list, "39," in the hope that he could play it with the band, in the remote chance that they showed up. And his wishful thinking paid off. Russo switched to "39," and Black and Gass walked past the crowd and joined them onstage.

The song is a ballad of sorts to a 39-year-old woman, and includes the lyric, "When we text each other, I fiddle with my anus."

But somehow, Black couldn't remember the words — or at least Russo suspects.

"I have a feeling that Jack may not have remembered all the lyrics to the song because he leans over to Kyle at some point and kind of whispers in his ear, and just by his body language I get this vibe that he doesn't remember the lyrics," Russo recalls. "But there's one part of the song, though, that it's ... if you sang it a million times you can't forget this part, so whenever that part came up I kind of tapped Jack on the shoulder and he leaned in and sang the rest of the song with me."

Russo and Dennington weren't the only ones who were pleasantly surprised. Megan Pavey, who watched the Tenacious D/NR/CD combo performance, says: "The whole place lit up. It was such an amazing place to see such a big personality but [Black] didn't upstage the cover artist and really respected them."

Russo says Black gave him a hug after they finished the song and asked if they were coming to The Bomb Factory show that night.

"I said, 'Yeah, we'll be there' and he said 'very cool, we'll see you there,' and that was it. They were gone as quick as they showed up."