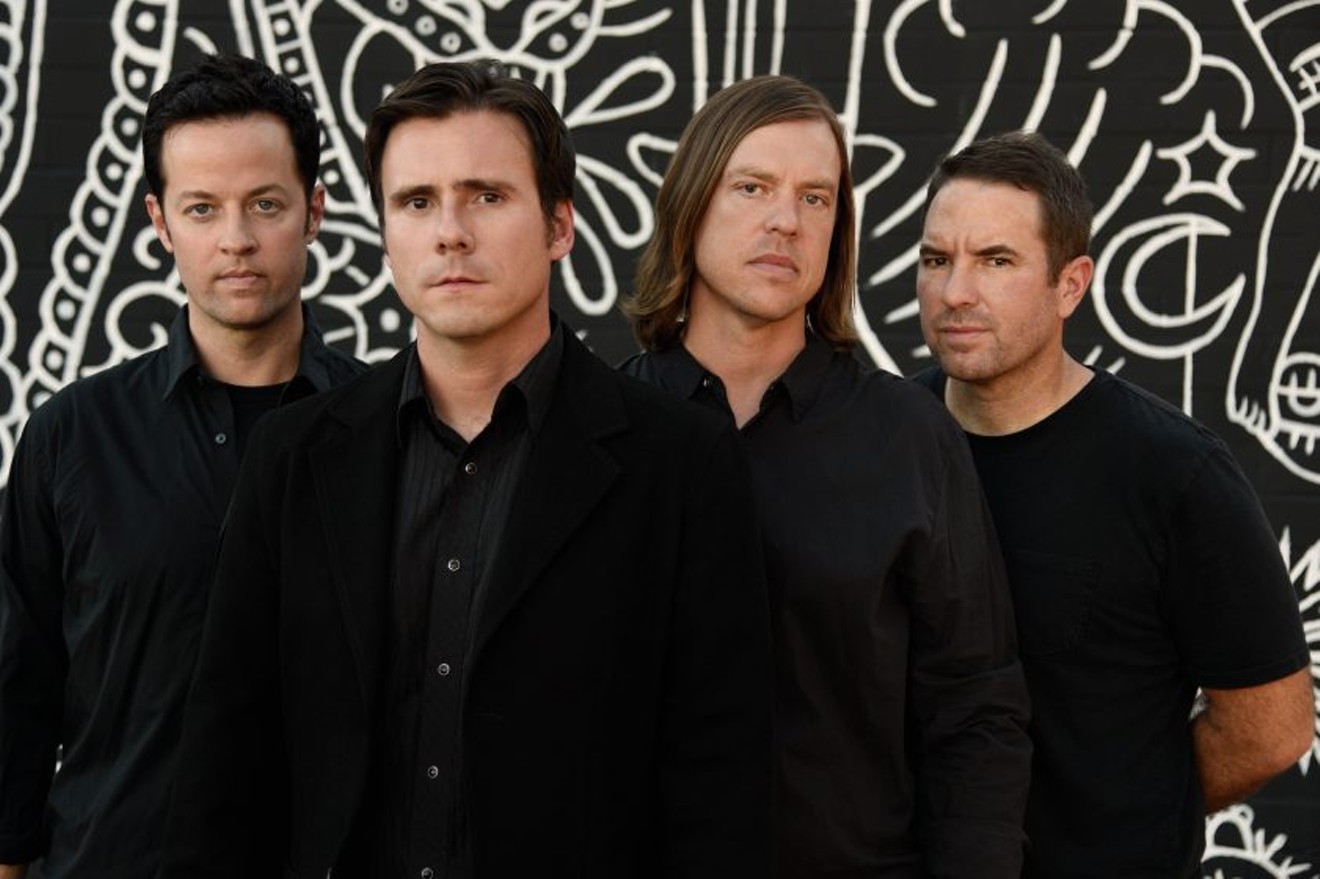 In navigating their career, the less Jimmy Eat World have relied on a label or manager, the better off they've been. "There's a lot that is out of your control in this whole endeavor," says frontman Jim Adkins. "The only thing that is in control is being proud of the work that you do. The things that bring the true rewards to you are what's going to sustain you."

Touring in support of their ninth album, Integrity Blues, Adkins now says that he and his bandmates — drummer Zach Lind, bassist Rick Burch and guitarist/vocalist Tom Linton — had no illusions about becoming rock stars when they first formed in the '90s.

But not too long after their turbo-charged pop-punk debut album came out in '94, they found themselves courted by Capitol Records. This was the post Nirvana and Green Day years, and a few keen A&R people at major labels looked into signing contemporaries like Mineral, Texas is the Reason, Sense Field and Christie Front Drive.

When most of those bands split before they signed, Jimmy Eat World became the frontrunners. Suddenly — even though they were unknown outside of their hometown of Mesa, Arizona, and had a developing sound that didn't scream Top 40 — they found themselves signed to a major label.

The band gained traction with two masterpieces on Capitol: Static Prevails and Clarity. But when they were dropped by their label with new songs in development, they decided to record their next album themselves, before they found a new one. The resulting album was Bleed American, a bona fide blockbuster thanks to the success of the singles "Sweetness," title track "Bleed American" and “The Middle."

Once the charging power pop of “The Middle” hit airwaves, people could not get enough of it. That album set the Jimmy Eat World on a path of success that they've followed ever since.
"If you want to be a writer, OK, what's stopping you? Write something today, then! Poof! You're a writer!" Adkins says. "I think people put off their passions and their dreams because they think they need something and you don't. Just do it. If you want something, the next question is, what are you doing about it?"
The band has been working and touring a lot, all while maintaining family lives. After touring for the anniversary of their fourth LP, Futures, the band took a yearlong break before making Integrity Blues.

The band keeps coming together because they all share the same drive to chase the next song or album. "I think we all like that we're really fighting for the same thing," Adkins says. "When there might be friction or an argument, you can't really take it personally. It's just the other person trying to forward the group. I think a lot of bands will break up over dumb stuff that just doesn't matter."

Since they experienced tours where barely anyone knew them and they had to scrape by, it helped them appreciate what they have now. "We have built a small but real base of fans before the commercial success came in," Adkins says. "That's been a major sustaining force for us. The worst thing that would have happened was [if] the first thing we did blew up. It would have been over by now."

Playing at art galleries, rehearsal studios and basements was vital to prove to themselves they were committed. "The fact that we were able to tour around and play small places and get a chance to connect with people in an honest way, it's sort of set the foundation for everything else to come," Adkins says.

Adkins seems excited to return to Dallas this weekend. "There are so many memories early on when we were touring around in a van, playing wherever we could," he says.

Playing coffee shops, house shows, Rubber Gloves and Deep Ellum venues helped nurture that strong fanbase. "It's always been a good time [with] supportive people," he says. "From the beginning of our band, we've been coming there to play and we're glad to be back."