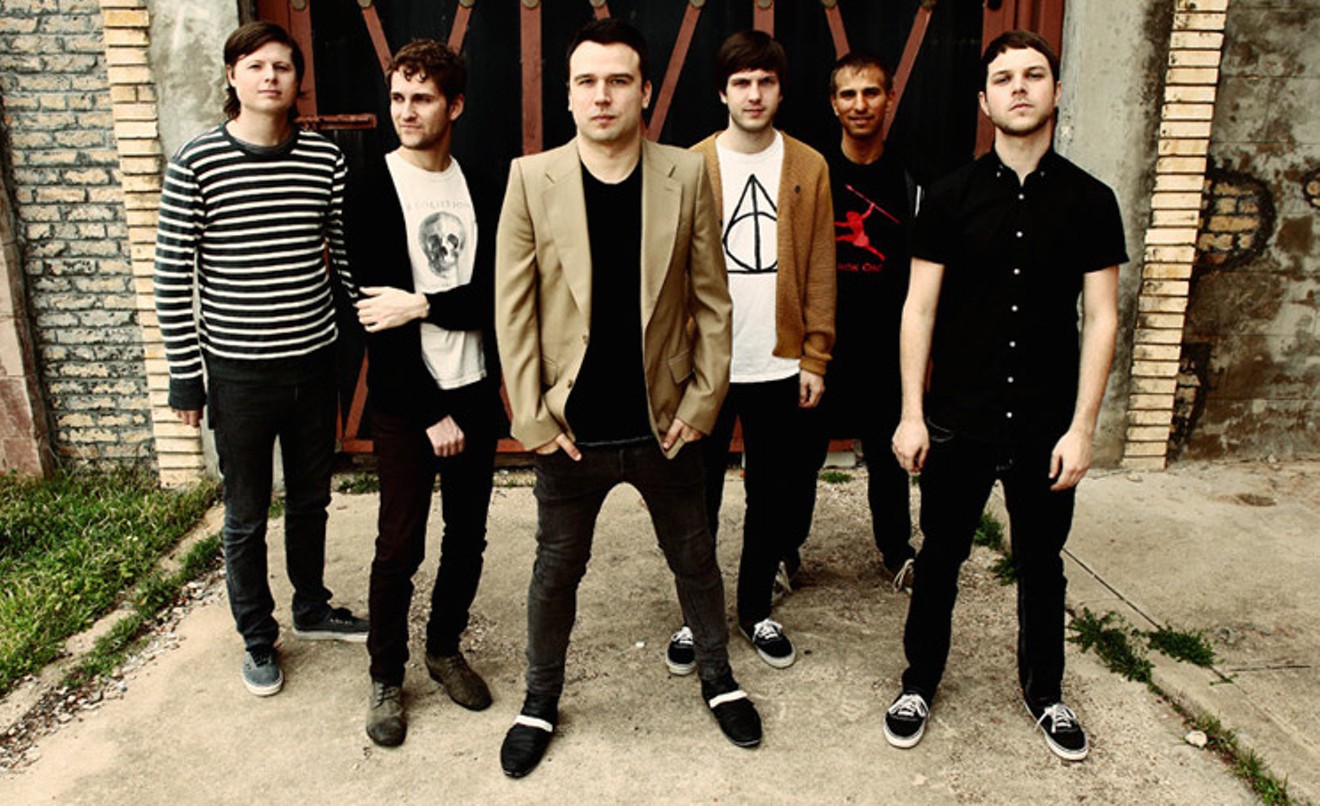 Max Bemis (third from left) has been able to maintain Say Anything's success even as the band's lineup has shifted around him. Ryan Russel/courtesy the artist
Bummer news, Say Anything fans. The emo band has canceled the rest of its tour — including shows at Trees on Tuesday, Jan. 30, and Wednesday, Jan. 31 — for health reasons.

This morning, the band's official twitter accounted tweeted that frontman and founder Max Bemis has laryngitis.

"We are sad to have to cancel the remainder of this tour. Dr’s diagnosed Max w/ laryngitis and said to stop singing or risk permanent damage to his voice,"  the tweet read. "This will have no effect on the scheduled Australian shows. Refunds available at point of purchase."

Those Australian shows are set for the final week of February, which should allow Bemis enough time to recover. But shows in Atlanta, Nashville and Dallas all were canceled. The Dallas shows were to be the final American dates of the In Defense Anniversary Tour.

"We are sad to cancel the remainder of this tour. Dr's diagnosed Max w/ laryngitis and said to stop singing or risk permanent damage to his voice." — Say Anything on Twitter

Both nights at Trees sold out long ago. On the first night, Say Anything — which has a sound that walks a fine line among emo, pop, rock and musical theater —  was set to perform its 2004 breakthrough album, ... Is a Real Boy, and the first disc of the double album In Defense of the Genre (2007). On the second night, Say Anything planned to perform its 2009 self-titled LP and the second disc of In Defense of the Genre would.

Bemis is the core of the band — Say Anything's lineup has changed many times around him — so it makes sense that his poor health would necessitate canceling shows. The current lineup has Parker Case on keyboards and guitar, Remington DuPree on drums, Garron DuPree on bass and Kenny Bridges on guitar.

The band managed to keep its fans happy long after emo lost its mainstream popularity. In Defense of the Genre didn't shake the music world like ... Is a Real Boy did, but the double album (along with the self-titled LP) gave Bemis the opportunity to really strut his stuff.

Earlier this week, Say Anything canceled two shows in Carrboro, North Carolina, because Bemis had the flu.

"Max has been recovering from the flu, but has relapsed," a tweet on Monday read. "Drs. have ordered that he rest to avoid contracting pneumonia, and to finish the tour healthy. Unfortunately, we are having to cancel both Carrboro shows. Refunds are available at point of purchase."

The same day, Bemis apologized to fans for the problems his illness caused to the tour on his personal Twitter account.

"Hey guys I have been physicall [sic] Ill [sic] most of this leg of this tour so apologies for the shows I’ve cancelled or croaked through," he tweeted. "It’s still been an absolute blast."