MC 900 Ft. Jesus Returns with a Sold-Out Show at the Kessler 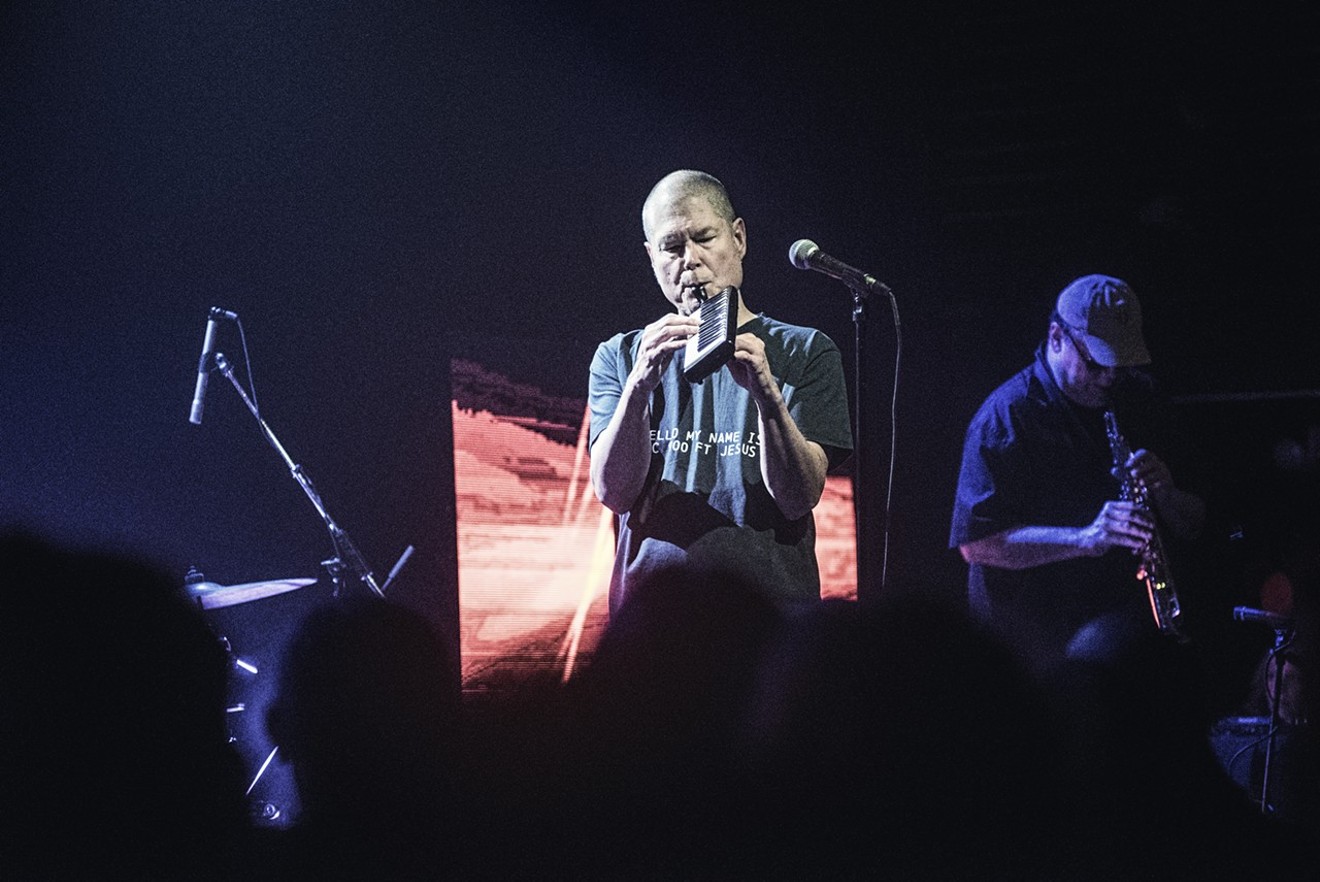 Griffin played a melodica at various points throughout the show. Mike Brooks
One of Dallas’ most beloved cult rappers has come back to life. Jeff Liles, creative director of the Kessler Theater, says he’d been hitting up Mark Griffin once a year since the venue opened in 2010, hoping to get him on stage to perform as MC 900 Ft Jesus, an act that had seen airplay on MTV in the ’90s.

“He was tired of me asking, and I didn’t badger him,” Liles says. “If he wasn’t going to have fun, I didn’t want him to do it. At one point I just gave up.”

On Friday, it happened. Griffin performed as MC 900 in a quartet featuring former touring musicians Chris McGuire and Greg Beck, as well as Wanz Dover, who Griffin says has been vital to translating the music’s electronic aspects into a live experience.

Griffin took the stage wearing black jeans and a black T-shirt that read, “Hello my name is MC 900 Ft. Jesus,” as if he needed an introduction. Maybe it was a jab at himself, and he felt the need to jog people’s memories after his lengthy absence. Quiet irony is perhaps what Griffin is best at.

The crowd clearly didn’t need a reminder, as they met him with crazy applause and shouts of “Welcome home, Mark!” His reaction to the deluge of attention was much like his dress: casual.

After a conversation with former Buck Pets drummer, Ricky Pearson, about the band’s 2016 reunion show at the Kessler, Griffin says his desire to take the stage once more just clicked in his head.

The sold-out show featured songs Griffin says he hasn’t played since 1991, due in part to the difficulties he had replicating some of his more electronic-inspired tracks on stage. Now armed with modern technology and some helping hands, Griffin dug deeper into MC 900 Ft. Jesus’ catalog than ever before for his comeback show.

Griffin’s loyal fan base clocked in mostly in their 40s. They were the middle-schoolers and high-schoolers who had watched him on MTV’s 120 Minutes and heard him on 94.5 the Edge back when the station’s reception was filled with static.

“It was right when I was starting to discover different music — the Edge was awesome. I got into [MC 900 Ft. Jesus] and had no idea he was from here. Then when I found that out, it was like, ‘Oh my god.’ That’s really, really cool that this was coming out of Dallas,” says Michael Federico, 41, from East Dallas. “It was like listening to an awesome short story set to music. It was something so different than the music I was used to hearing on the radio.”

Fans such as Laurence Jesterton, 44, of Ft. Worth, and Craig Kolwhatski, 44, from Arlington, recall seeing him play with regularity at Trees.

“I grew up on this stuff in the ’90s. When he first came out, we knew about him, and we saw him at a couple of local venues,” Jesterton says. “When [he and DJ Zero] started playing Trees all the time, like every two or three weekends in [’90, ‘91], yeah it was good times. Trees was the highlight of Deep Ellum, that was the sweet spot.”

“I didn’t know he was still around,” Jesterton adds. “It was great to hear his name again. I was like,‘I’m in.’”

Wanz Dover helped translate the electronic aspects of Griffin's tracks to a live setting.
Mike Brooks
As Griffin fell of the map musically and navigated his way through different day jobs in Dallas, he wound up at Kitchen Dog Theater. Company member, Max Hartman, who also plays in the band Mur, remembers working with him.

“He would come help us build the sets and shit. I’m standing there drilling a platform together going, ‘Oh my god! Tell me about this song. What was it like working with Earl Harvin?’ I was star-struck getting to work with [him],” Hartman says. “We got to be friends through that, and he ended up playing a little trumpet on this record [for Mur]. I haven’t seen him play live [since] 15 years back when he played at Trees, so I’m excited. It’s been a long time.”

Even in the “regular world,” it was predictably hard for Griffin to escape his past. Really no matter where he went in Dallas, longtime fans and followers would spot him and want to talk about music.

“A couple years ago I ran into him in Oak Cliff. He was working at a bookstore over here. I walked in and was like ‘Hey, Mark!’ and we started talking. I was friends with Earl Harvin and Mike Dillon who played on the first couple of records with him, and he’s good friends with some people I’m close with. It was kind of a surprise that no one was saying anything, and then he announced this show,” says musician Kyle Harris, 46, of Deep Ellum.

Harris discovered Griffin’s first album, Hell with the Lid Off, when he was working for a local record store in Denton. “We were big supporters of the local music. By the time he exploded everywhere else with the second record, we were already big fans.”

And it’s no wonder Griffin garnered such a following in his career. His lyrics cut through the bullshit, and messages like “The Truth Is Out of Style” might be even more relevant at the present time than when he wrote them:

“I’m going to reveal the secret of my success. So now you can share in my continued happiness. You will know the blissful peace of all the masters of old. Everything you touch will turn to 14-karat gold … The truth is out of style.” 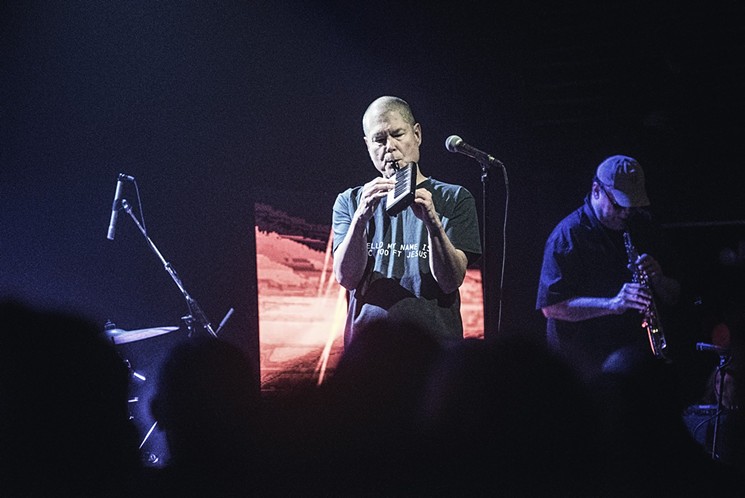 Griffin played a melodica at various points throughout the show.
Mike Brooks
During the 80-minute set, Griffin came off more like a spoken-word poet in an oversized coffee shop delivering verses calmly from behind a mic, than a rapper-musician in a concert hall. This was especially true during “Dali’s Handgun”:

When Griffin was done performing the 43-line poem, an audience member’s gratitude shot through the quiet hall. “Thank you, Mark!”

At various points throughout the show, Griffin played the melodica, a flute-length keyed wind instrument. But the trumpet was noticeably absent from the set. That’s one of the instruments Griffin played in the local band the Telefones, before breaking off into his solo career. The instrumental heavy-lifting was done by Chris McGuire on altosax, Greg Beck on drums and Wanz Dover on an assortment of instruments including synths, computers and turntables.

The musicians embarked on lengthy instrumental interludes between Griffin spitting lyrics, and Dover’s electronic sound balanced the jazzier feel of McGuire’s sax. Dover’s job was to translate Griffin’s early ’90s electronic sound. His scratching on the ones and twos was a welcome throwback to that era, and grounded the audience in Griffin’s history.

At the end of the set, Griffin blamed Liles (or thanked him, depending on how you look at it) for "bugging" to get back on stage. Liles says he could tell Griffin had fun. Despite his reluctance to perform live, Griffin settled into a groove that night that worked for him and for the audience.
click to enlarge

MC 900 Ft. Jesus performing at his comeback show.
Mike Brooks
KEEP THE DALLAS OBSERVER FREE... Since we started the Dallas Observer, it has been defined as the free, independent voice of Dallas, and we'd like to keep it that way. With local media under siege, it's more important than ever for us to rally support behind funding our local journalism. You can help by participating in our "I Support" program, allowing us to keep offering readers access to our incisive coverage of local news, food and culture with no paywalls.
Make a one-time donation today for as little as $1.