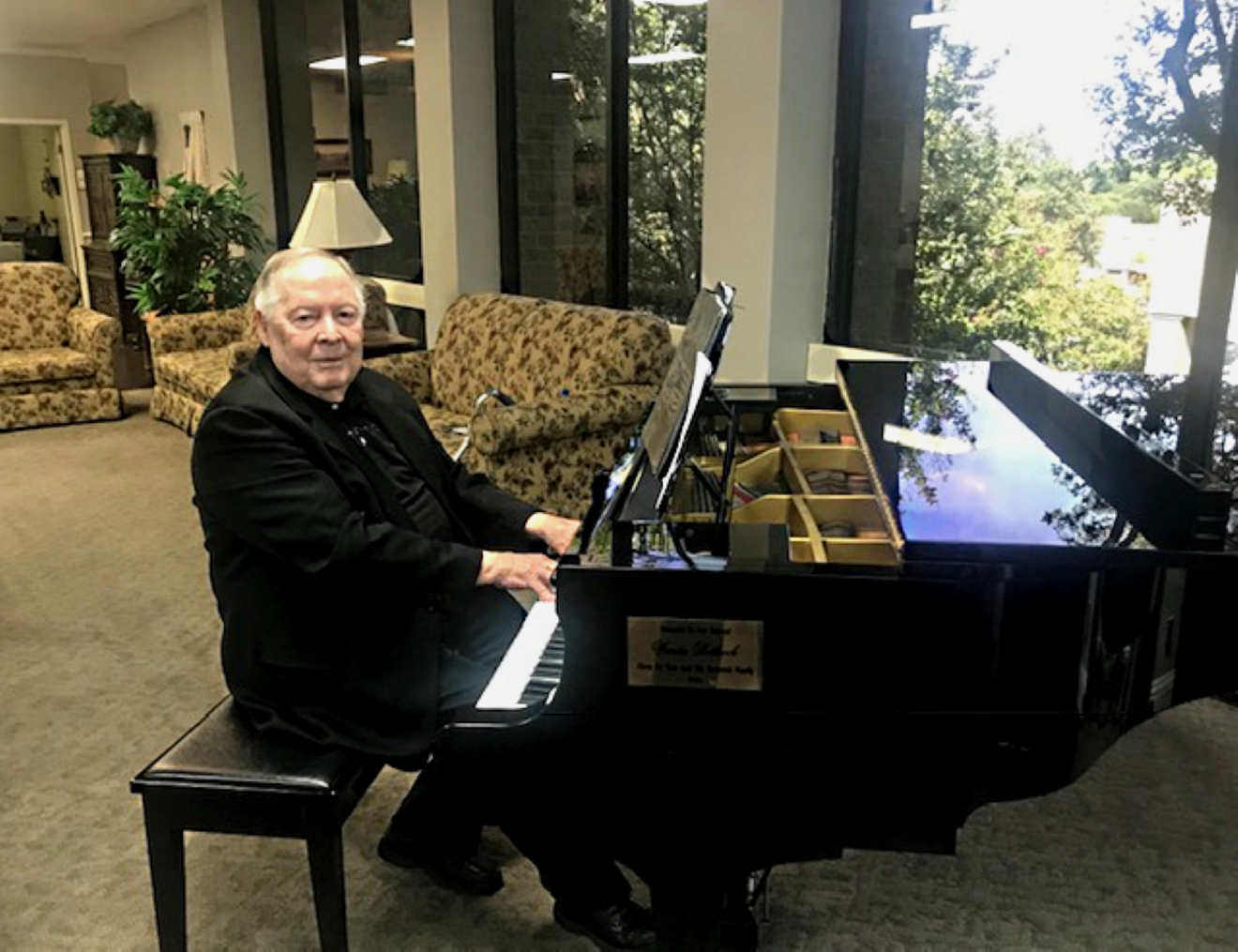 Piano Man Bill Schahn delights nursing home residents with his songs and his stories. Karen Gavis
On a hot August afternoon, 90-year-old Bill Schahn puts aside his black suit coat to play piano and sing for the residents who’d gathered in the dining area of a Fort Worth retirement home. Between songs, Schahn provides commentary, and the crowd, whom he calls his friends, responds with laughter. Music, he says, has been his life.

Schahn grew up Frank William Schahn in the Texas Hill Country. He was working as minister of music for the First Baptist Church in Lufkin when he says he was asked to become chorale director for the new Dallas Baptist College, which is now Dallas Baptist University.

That was in the 1960s, he says, when the college was moving to Dallas from Decatur.

”I came on as the chorale director and voice teacher and taught other courses,” he says.

Later, Schahn attended the University of Oklahoma where he also taught part time while in a graduate assistant program working on a doctorate degree with the goal of pursuing tenure at DBU. But instead of returning to Dallas, he followed fate to the Texas coast, California and around the world.

Schahn says he always enjoyed teaching music but preferred church work because it allowed him to work with senior adults as well as children. So when he was offered a job at the First Baptist Church in Port Arthur, he took it.

“It was a fine job,” he says, but he went to San Mateo when someone eventually challenged him to try California. There, he led multiple choirs and had an 11-year run producing a program that he calls a living Christmas tree, describing it as a lighted orchestra show.

Later, Schahn began working with a Presbyterian group, the Knox Fellowship, and traveled across the world. He says one of his favorite performances was in Interlaken, Switzerland, during the summer when “English-speaking Baptists would come from all over Europe for a summer conference.” Schahn performed there in the Swiss Alps on multiple occasions in an exquisite auditorium.

”They opened up the big curtain and there in the moonlight was the beautiful peak,” he says, his eyes brightening. “And there it was out the window. And I was singing ‘Climb Ev'ry Mountain.’ What an inspiration that was.


“I love it when students go beyond what I did. That was my whole plan is for them to do better than I did.” — Bill Schahn

”I enjoyed doing that. It was a way of doing ministry.”

Schahn was still performing with the Knox Fellowship, he says, when he came back to North Texas and started meeting with and performing for people in nursing homes. While music director at Riverside Baptist Church near downtown Fort Worth, he met many of the people he was playing for at the retirement home.

“Some of the people from that church moved in (here),” he says. ”They’ve become my family. I still keep up with all of them. They all come see me like they’re my family.”

Until about a year ago, Schahn, who never married, played piano at the nursing home every Tuesday at 2:30 for a “Sing-along with Bill.” He still plays on occasion and whenever people invite him.

Recently, some friends sent Schahn a plane ticket to Florida to celebrate his 90th birthday.

“They had parties at different places, and we’d sing and have music and play games and do things,” he said. “All week I was doing something. And then I came home and celebrated here.”

Nearly his entire life, Schahn, whose father was a fiddle maker, has been playing music, directing choirs and teaching voice. Schahn says he prefers a regular piano rather than an electronic keyboard. And he’s given free voice lessons to all the choir members in the dozen or so churches where he’s worked, if they wanted them. He says he believes his “God-given talent” is helping others to develop theirs.

“I love it when students go beyond what I did,” he says, adding that one of them has taught voice to Beyoncé as well as a member of Pentatonix. “That was my whole plan is for them to do better than I did.”

Schahn shares that he’s considering moving into the retirement home himself.

“If you moved here,” a woman who's making her way into the elevator and back to her room tells him, “you could play and sing all the time.”

Watch our video below: