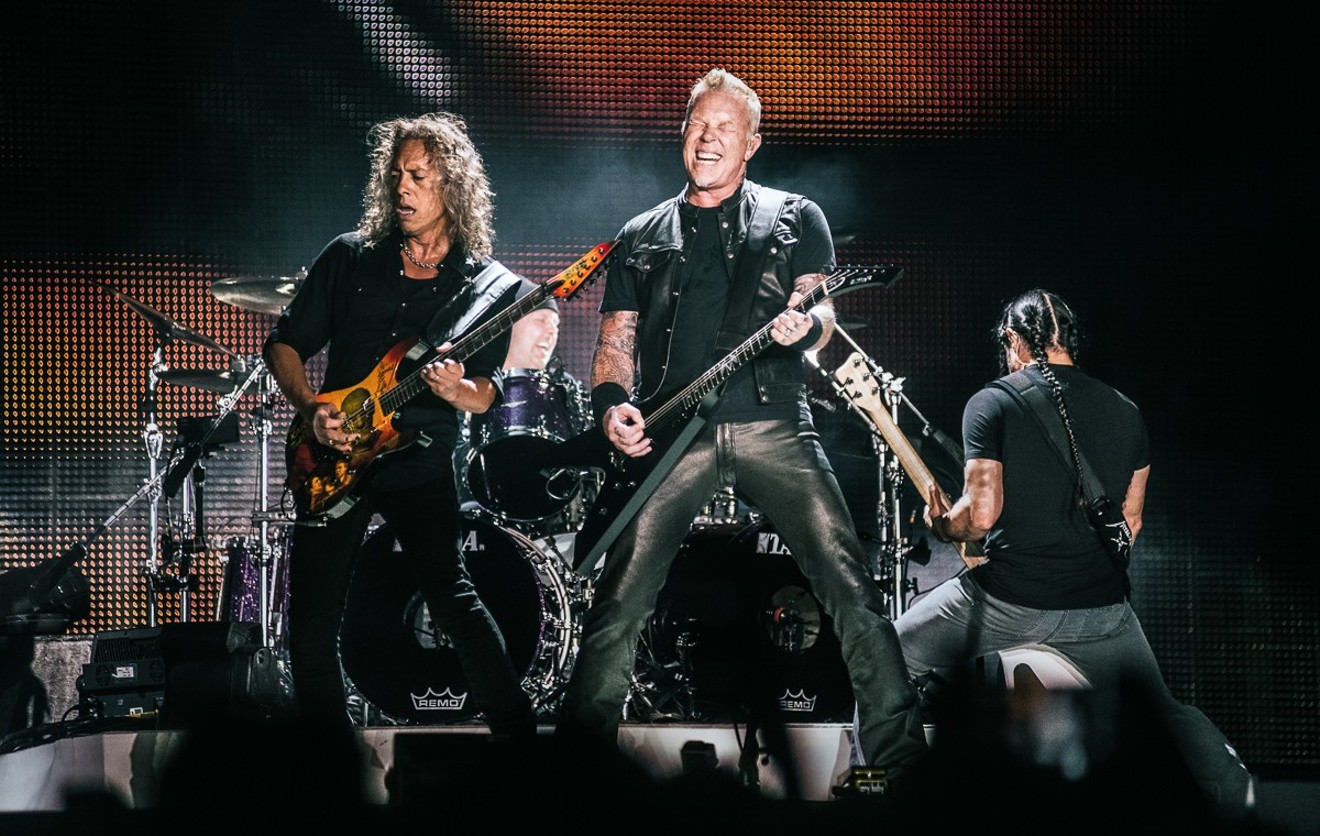 Thirty-one years ago, Metallica released its masterpiece, Master of Puppets. Not that you'll see the group commemorate it with an anniversary tour: The Angeleno metal legends are on the road for their WorldWired Tour, promoting their latest album, Hardwired...to Self-Destruct. But as they visited Arlington in Friday night for a stop at AT&T Stadium, the typically unsentimental bunch seemed to have found some degree of peace with their past — in their unapologetic way.

"Metallica don't give a shit," frontman James Hetfield declared early in the night, his rallying cry for the 60,000 members of the "Metallica family" in attendance, the majority of whom wore the band's T-shirts. The band has an unusually passionate fan base, one given to love and loathe the band in equal measure. Each time Metallica has invoked those fans' wrath — cutting hair, "selling out" (two things that may as well be synonymous in fans' eyes), the Napster controversy — members have had that same response: They just don't give a shit.


Metallica's fans want to hear songs about Cthulu and insane asylums and getting your limbs blown off on the battlefield. In its purest form, Metallica's music is social commentary wrapped up in unabashed escapism.

As the biggest metal band that's ever been, and almost certainly ever will be, that attitude is not surprising and is largely to be expected. But a crucial part of that attitude is also wrapped up in Master of Puppets and the tragedy that surrounds it: the death of founding bassist Cliff Burton in September 1986, six weeks before the album was released. Thus the record stands not only as arguably the pinnacle of the form but also one of metal's great what-might-have-beens.

The timing of Burton's death ensured that Metallica would never be the same band again — if not strictly because of quality, then because it had broken through to the mainstream and begun headlining arena and stadium tours. It was no longer a band of brothers taking on the world but a group of superstars having to play to and please it. "The Black Album," released five years later, showed how fame changed Metallica's music and the unease with which it shouldered that fame. It also sold as many copies as the band's four previous albums combined, helping pave the way for the likes of Arlington's Pantera to top the Billboard 200 pop chart.

"The Black Album" accounted for five songs Friday night, nearly one-third of the set list. Matching that total was Hardwired, the group's first studio album in eight years and one with surprisingly good reviews for a band long considered to be past its best (in the studio, at any rate). Metallica has always wanted to look toward the future, regardless of whether its fans felt the same, but being famous remains a thorny issue. In introducing "Moth Into Flame" off the new album, Hetfield said, "This is a song about fame and how it draws you in. But it's a trap."

The problem is, Metallica's fans don't really give a shit, either. They want to hear songs about Cthulu and insane asylums and getting your limbs blown off on the battlefield. In its purest form, Metallica's music is social commentary wrapped up in unabashed escapism, and the perils of being a mega-rich rock star don't really fit into that Venn diagram of interests. Growing old gracefully has never been easy for these guys because they've spent 25 years wrestling with a reality that alienates them from their fans.

Mike Brooks
They seem to be getting better at it, however, and thankfully for both the band and its fans, they still put on a good live show. Granted, there weren't many surprises, unless you want to count the fireworks and canon blasts that were consistently startling Friday night. But the fans aren't necessarily concerned with surprises, and most were likely to have left the Cowboys stadium pleased with what they saw. The band even paid tribute to Burton, projecting a picture of him on the more than 100-foot-tall screens while Robert Trujillo played his extended bass solo and the rest of the band took a breather.

Trujillo's solo led into easily the best part of the night, featuring a run of songs that included "One," "Master of Puppets," "Fade to Black," and "Seek & Destroy," a reverse chronology of classics from the group's first four albums (and, depending on whom you ask, the only four albums that matter). Each song played out like a mini suite, classical music played at thrash metal speeds, a fact that felt more pronounced when played alongside the slower, chugging riffs that have characterized Metallica's music since "The Black Album."

Inevitably, it was the title track of Master of Puppets that truly stood out from that batch. Even three decades removed, it felt like something approaching an apotheosis, but in Metallica's case it wound up being the apotheosis; it never approached those levels of complexity and ambition again. Nor, in truth, has metal ever pushed its bounds the same way since, a fact that's easy — but not fair — to blame Metallica for.

Metallica helped make metal a household word, maybe, briefly, even transcended it. But it couldn't save it — and that, whether the group likes it or not, is its burden to bear.

Hardwired
Atlas, Rise!
For Whom the Bell Tolls
The Memory Remains
The Unforgiven
Now That We're Dead
Moth Into Flame
Wherever I May Roam
Halo on Fire
Motorbreath
Sad but True
One
Master of Puppets
Fade to Black
Seek & Destroy