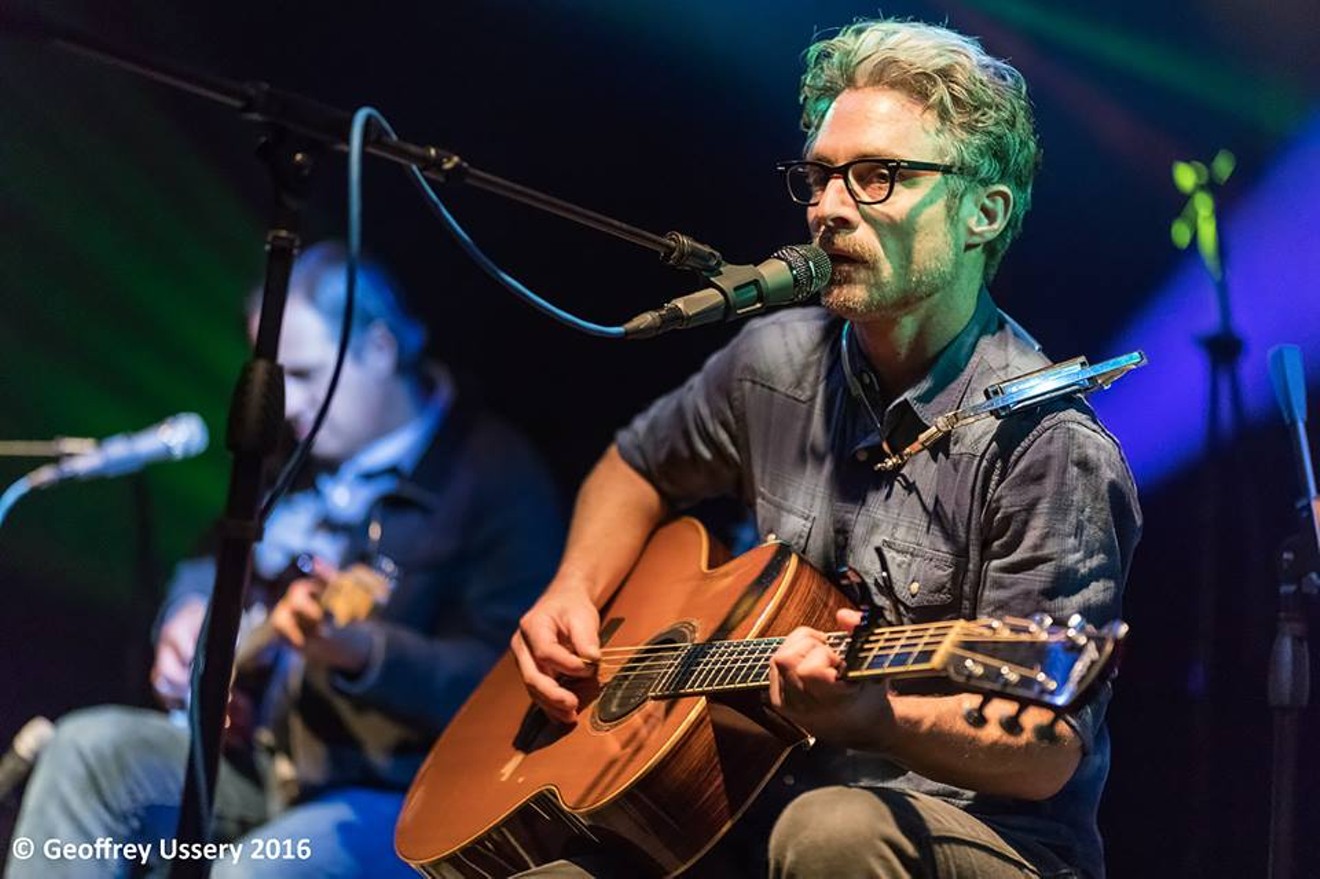 Doug Burr released his magnum opus, On Promenade, 12 years ago and has been a music scene fixture since. Geoffrey Ussery

Lord knows it’s hard to support a family as a regionally successful singer-songwriter, especially a big family. That’s why Doug Burr decided early on to work full time during the day to support his wife and four kids, switching hats to write music during the dark and quiet hours of night. It’s a difficult lifestyle, though one he says he happily chose.

But earlier this month, and after recently buying a house, Burr lost an 8½-year contract as a systems analyst — his family’s main source of income and a job he thought would last until retirement. And the Denton crooner is now hurrying to book as many shows as possible while he waits for something stable to come along, again. “The absolute worst just happened,” he says.

Burr’s 20-year music career has earned him a highly supportive fan base and critical acclaim, despite its modesty. Because he’s a dedicated family man, the many-time Dallas Observer Music Award nominee and winner usually only plays about a dozen shows a year, doesn’t tour and typically plays to the same audiences at the same venues throughout North Texas, such as Sons of Hermann Hall, Dan’s Silverleaf, Poor David’s Pub and others.

“It’s been a slow growth,” he says. “Many projects and songs that could have seen the light of day never did.” Burr wanted to watch his kids grow up, be there for the birthday parties and help his wife, Karen, raise them. It’s a decision he stands by, although he says doing music full time was always ideal, just not reasonable.

Despite his humble presence on the music circuit, Burr’s soft and syrupy vocals — usually paired with a guitar, harmonica and stomp box — have easily captivated nearly anyone who has caught him live, which has helped cement him as one of the best lyrical storytellers around and landed him on the California indie label Velvet Blue Music. Fans shared with others how personal Burr’s music was to them even in those very early days when he independently released his first album, The Sickle and the Sheaves, in 2003.

Bruce Burns, host of KUZU’s Colonel Burns Honkytonk Hour and vice president of the Denton Music and Arts Collaborative, says his love of Burr’s music began when his late friend Dillon Strange, who died in 2017, introduced him to that first album 16 years ago.

“The evening of Dillon’s memorial at Dan’s Silverleaf, the universe aligned and Doug was playing across the street at Harvest House,” Burns says. “By then I had become friends with Doug’s drummer, Jeff Ryan, and I asked if they could play the song ‘Stranger in This Land’ in honor of Dillon’s life, and for connecting me with Doug’s work.” They played the somber song from Burr’s debut album, and Burns says he cried from both the gravity of loss and the appreciation of that moment.

So when Burr posted to his Facebook on Aug. 8 that he had been laid off, and a few days later, a video asking for any music work he can get with the caption: “Hey y’all - check out my bargain basement prices and let’s strike a deal. Bring me out for some house shows. ACT NOW to take advantage of the incredibly low prices!,” it was no surprise that Burns came to Burr’s side to help.

“Time and again I’ve seen the Denton community embrace people when they’re down,” Burns says. “So this felt like the universe aligning once again to try and pay it back and ensure our artist and musician community knows we’re all out here and ready to support them.” Burns immediately booked a show for Burr at his home in Corinth last Saturday, which raised Burr $757, and has connected him with two other shows in the coming month.

Longtime fans of Burr may think he’s above small house shows, that his talent stretches far beyond someone’s living room, and maybe they’re right. But times are tough, and Burr says: “Why wouldn’t I? Why shouldn’t I?” He cites artists like Wil Johnson (Centro-matic, South San Gabriel) and John Vanderslice (The Mountain Goats, Spoon) as a couple of examples of larger acts who still play house shows.

As far as earning any money from merchandise at his shows, Burr says most of his fans likely already own all of his records — his latest being 2015’s Pale White Dove — and that he doesn't think many folks download music anymore. And while a lot of his fans stream his music on Spotify, Burr says he only sees a very small amount of money in royalties: “You see zero money from streaming. It’s like a hamburger every quarter of a year.” And while he says he doesn’t hate streaming services, there is a miserable downside, and the artist percentages in royalties are too low.

With a family and working a day job, practicing music became something Burr did hours a month instead of hours a day, like it was earlier in his career. And while he’s working with as many recruiters as possible to get his finances back on track with a stable office job, he’s eager to make his newly freed-up time count positively toward his music: “Rather than sitting around and wringing my hands, I’m going to use them.”
KEEP THE DALLAS OBSERVER FREE... Since we started the Dallas Observer, it has been defined as the free, independent voice of Dallas, and we'd like to keep it that way. With local media under siege, it's more important than ever for us to rally support behind funding our local journalism. You can help by participating in our "I Support" program, allowing us to keep offering readers access to our incisive coverage of local news, food and culture with no paywalls.
Make a one-time donation today for as little as $1.