Among artists with a North Texas connection, Post Malone leads the ranks in the number of subscribers on streaming services. Mike Brooks
People oversimplify music streaming.

While it’s true that Spotify and Apple Music comprise an enormous chunk of the sector, YouTube has become a major platform for streamed music, and SoundCloud has launched many music careers. Every streaming platform worth its salt brings listeners with different tastes to the table, so to treat Spotify or Apple Music numbers as the end-all-be-all of an artist’s commercial success is to misunderstand how many dimensions streaming has.

That makes it difficult to determine an artist’s commercial success in the age of streaming. Streaming isn’t a monoculture, and success can vary according to the platform.

We created a list of 20 of North Texas’ most commercially successful artists and compiled data using the Soundcharts database (I told them I did A&R for a label named Snakes With Human Traits, so I have one week to make that a reality before my free trial expires.) Soundcharts uses followers as a baseline rather than song streams, and since we’re looking at an artist’s built-in crowd on streaming services, it seemed more appropriate to compile the number of followers/subscribers per platform than the aggregated number of streams.

Oak Cliff rapper Yella Beezy has nearly twice as many followers on Spotify than YouTube. 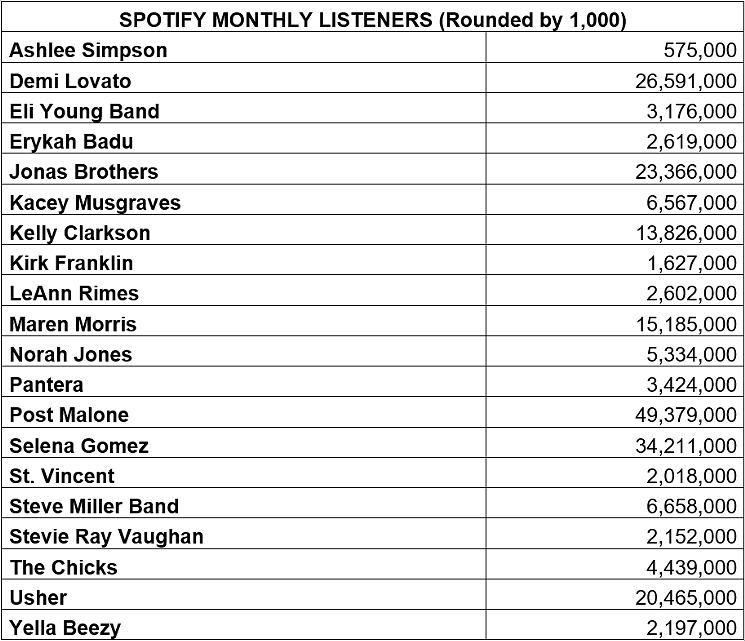 Garrett Gravely/Soundcharts
By this point, you’re probably wondering what the Apple Music metrics look like in comparison, but we’re going to guess that they're roughly proportional to Spotify, as Soundcharts doesn’t appear to have any Apple Music data.

Soundcharts does, however, have numbers from lesser-known streaming service Deezer:

Somehow, Beezy and Ashlee Simpson rank in the lower tier of this streaming service, while Post Malone ranks fifth behind Usher, Lovato, Gomez and Kelly Clarkson. There’s also a strange tendency for country music acts, no matter how commercially successful, to clock in at under six-digits with fans. Kacey Musgraves, who has three times as many Spotify listeners as St. Vincent, trails her on Deezer by 10,000 listeners.

Predictably, many of the less-current artists on this list have abysmal numbers on SoundCloud, but Soundcharts still sees fit to include the streaming platform in its reports:

Many might expect hip-hop and pop artists to have a more dedicated following on SoundCloud, but surprisingly, Norah Jones and the Chicks have the highest number of SoundCloud followers; even more than Post Malone.

Of course, if any of the listed artists read these numbers and get discouraged by the state of their career, Snakes With Human Traits is always looking for new artists.
KEEP THE DALLAS OBSERVER FREE... Since we started the Dallas Observer, it has been defined as the free, independent voice of Dallas, and we'd like to keep it that way. With local media under siege, it's more important than ever for us to rally support behind funding our local journalism. You can help by participating in our "I Support" program, allowing us to keep offering readers access to our incisive coverage of local news, food and culture with no paywalls.
Make a one-time donation today for as little as $1.