What We Heard at Rock Lottery in Denton on Saturday 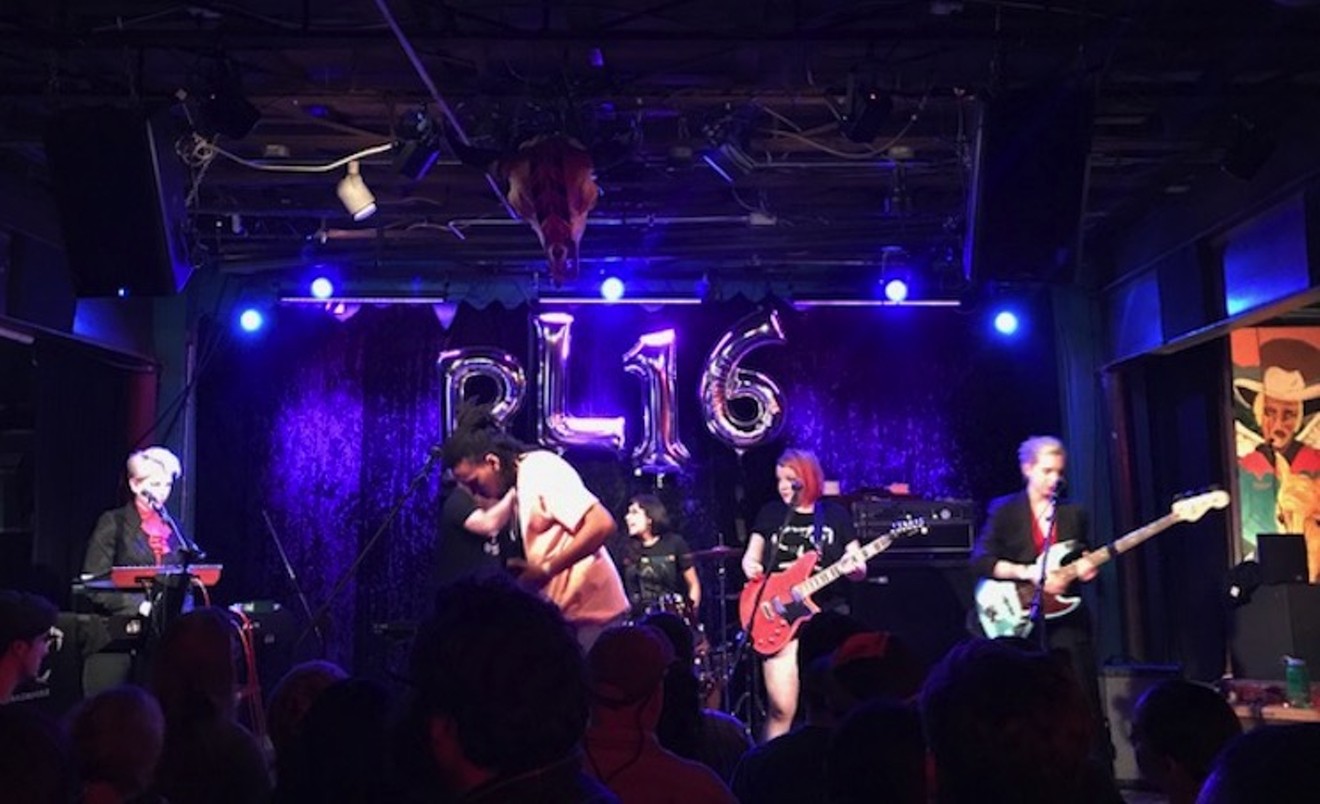 Orgasmivore might have what it takes to remain a band. Jeff Strowe
Dan’s Silverleaf hosted the 20th Rock Lottery on Saturday night in Denton. The concept has remained consistent for two decades, but it has taken place in a number of cities. Musicians met at Dan’s on Saturday morning for breakfast and to throw their hats in the ring for a lottery that would place them in a new band for the day.

Once decided, the bands retreated to different workspaces around the city. They had instructions to return 12 hours later with a band name and set list of three new songs, one cover allowed.

When the bands returned, they found a packed house of musicians, bartenders and fans. Here's what we heard.

Kuzumineers were a quintet consisting of John Hodge (Razorbumps), Ian Hamilton (Nervous Curtains), Dale Jones (New Science Projects), Joe Snow (Joe Pat Hennen) and Randall Minick (Felt & Fur). They drew the unenviable task of playing first, but they used it to their benefit and built their performance up slowly. 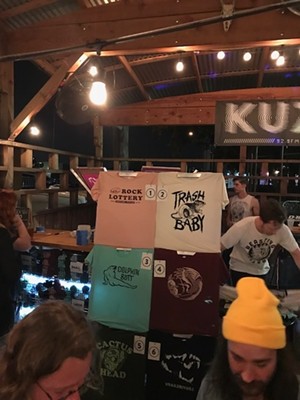 Saturday's T-shirts
Jeff Strowe
Minick’s steady, droning synths meshed nicely with Snow’s haunting lap steel notes, serving as a sturdy foundation for the dreamy soundscapes conjured by Hamilton’s bass and keyboards and Jones’ clipped and steely vocals. The set eventually shape-shifted into blues and alt-country before ending with a punk snarl. Kuzumineers' set was a solid kickoff to the festivities.

Next out was Trash Baby, featuring Bella Scott (Mimisiku), Avery Taylor (Kira Jari), Sudie Abernathy (Sudie), Cesar Velasco (Thin Skin) and Alan Painter (Black Sea). They made a stellar decision to take the stage to a cover of “Danger Zone,” Kenny Loggins’ theme song to the 1986 classic action film Top Gun. Conversation stopped and all eyes were on the stage.

Abernathy’s smooth and soulful singing established a relaxed and casual vibe. But as with the Kuzumineers' performance, the music got louder as the set progressed. Taylor’s bass squared off with Scott’s keys to produce swirling, pulsating music that echoed both the post-punk squalor of Joy Division and the funkiness of Talking Heads. Given more time, Trash Baby probably could have churned out a solid cover of “Psycho Killer.”

Orgasmivore also had the best band name and performed the best cover of the night — a joyous rendition of Abba's "Dancing Queen" that elicited cheers and squeals from the audience. Orgasmivore seemed like it might have what it takes to remain a band.

From there, the group kept spirits high, with songs full of shredding guitar kick-outs, groovy backbeats and forceful vocals — including a scene-stealing Janis Joplin-esque moment from Danielle. At times, it resembled Alabama Shakes on speed; at others, TV on the Radio.

At this point, the event was running well over its intended four hours. The closing band, Dolphin Butt, had little time to waste.

Dolphin Butt made sure that attendees, at this point quite tired, received a proper sendoff. While there were occasional dips in the momentum — and a caffeine bar would have provided a welcome break from a more than four-hour drinking marathon — the audience’s continued focus and enthusiasm was a testament to the organizers’ vision and the bands’ showmanship.