NOFX Is Hosting Punk in Drublic, a Festival With No Kids and Fewer Bands 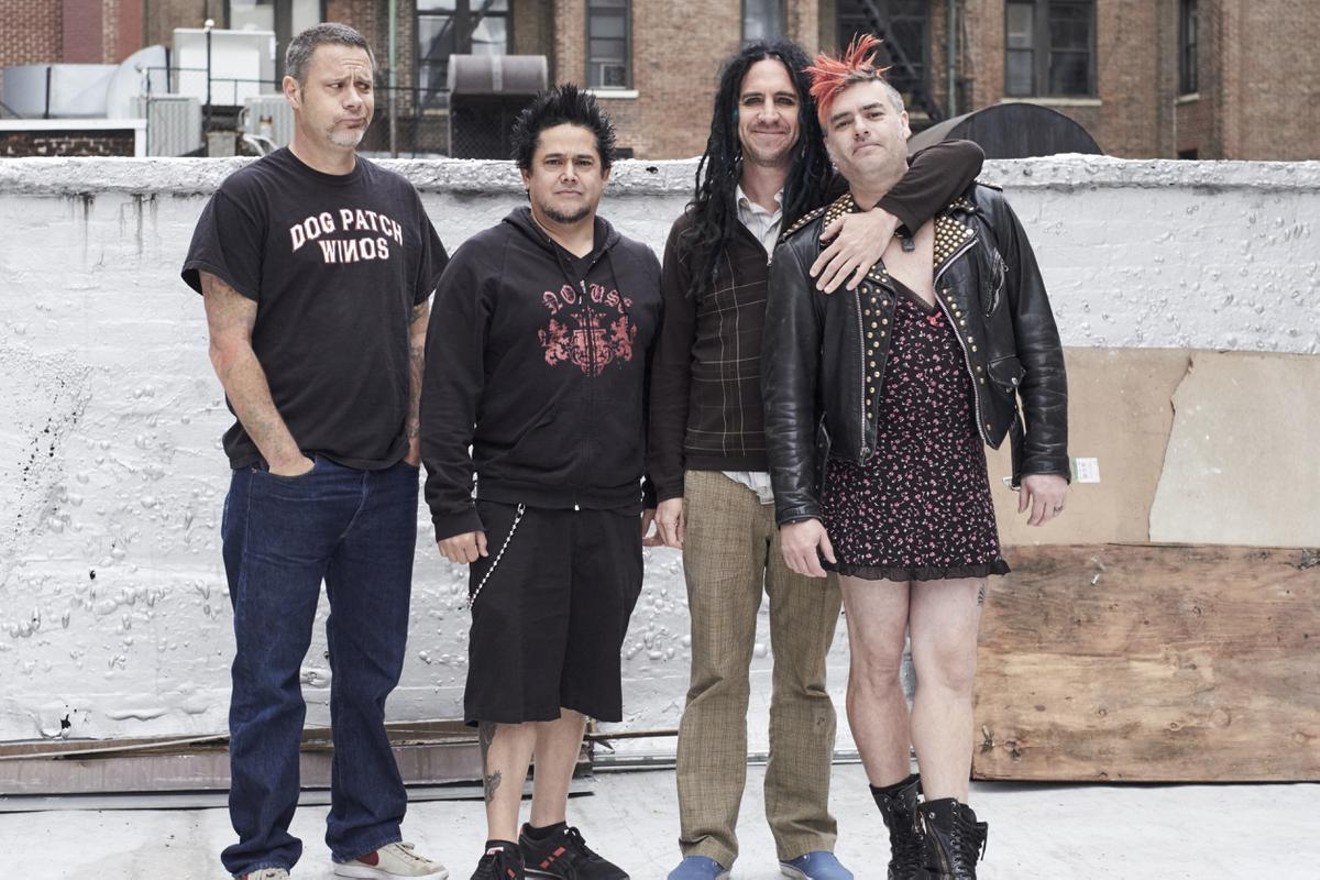 No kids allowed at Punk in Drublic. Joe Leonard
On Sunday afternoon at Panther Island Pavilion in Fort Worth, NOFX, Bad Religion and a few other punk bands will give fans a different kind of festival. It’s nothing like the Warped Tour or a club show; the Punk in Drublic festival is meant to be the kind of show NOFX frontman Mike “Fat Mike” Burkett would want to see with his friends.

Named after one of NOFX’s best-known albums, the festival is meant for the longtime fans of the band who can't make shows all the time. It’s a pseudo-destination festival, dictated by Burkett’s wishes.

“I pick the bands,” he says from his office at his label, Fat Wreck Chords, in San Francisco. “They’re all friends of mine. They’re all bands that I like.”

After they did six Punk in Drublic shows in 2017, Burkett and the festival’s organizers wanted to do them again this year.

“Even the smallest one was successful,” Burkett says. “I think people had a great time. People had never been to anything like this.”

Burkett sees advantages in hold a 21-plus festival.

You’d think not having an all-ages festival would be a bad business idea. Not so.

“Having these shows be over 21 hasn’t hurt business at all,” Burkett says. “There’s more punk rockers over 21 than under 21.”

One of the big attractions is free beer. The first four hours of the festival feature samples of beer from at least 15 local beer companies. Attendees are given a small glass and will have access to more than 100 different kinds of craft beer. After 4 p.m., they'll have to start paying for beer.


"We’re really trying to think outside the box of what makes a good experience. Not this shoving 25 on a bill over three stages. What would us and our friends like to go to?” – Mike “Fat Mike” Burkett

As much as beer has been the subject of many of NOFX's songs in the past, Burkett has been vocal about playing shows without a drop of alcohol in him.

“It's the only thing that isn't fun sober,” he told the Dallas Observer in 2016. For him, playing shows in clubs sober was torture, while spending more time with his family and riding his bike was far better.

He's blunt about how things have been since then.

“Well, I’m not playing sober anymore,” he says. “These Punk in Drublic shows are on weekends. The problem was when I had to play every night, it got kind of tiring. Playing Saturday and Sunday night, what’s the problem?”

“I don’t think it’s surreal anymore, but they’re still my favorite band,” Burkett says. “[Bad Religion's] Jay [Bentley] and Brian [Baker] are two of my best friends. We’ve been trying to tour together for probably 12 years, but we could never figure it out because playing clubs doesn’t make sense. This was the first time it made sense. So, it’s great.”

The tour includes shows in Austin, Richmond, Virginia, and Philadelphia, but the most peculiar date is one in Ohio. This one is a camp-out during the first three days of June. The campground they’re using has hosted a rave festival before, and it’s in a perfect spot for people to come to.

“We have offers from all over the world,” he says. “Even South America wants to do it. It’s a fresh idea. We’re really trying to think outside the box of what makes a good experience. Not this shoving 25 on a bill over three stages. What would us and our friends like to go to?”

Punk in Drublic Festival is Sunday, May 6, at Panther Island Pavilion in Fort Worth.