From Chaos to Car Wash: A Day Around Denton With The Wee-Beasties 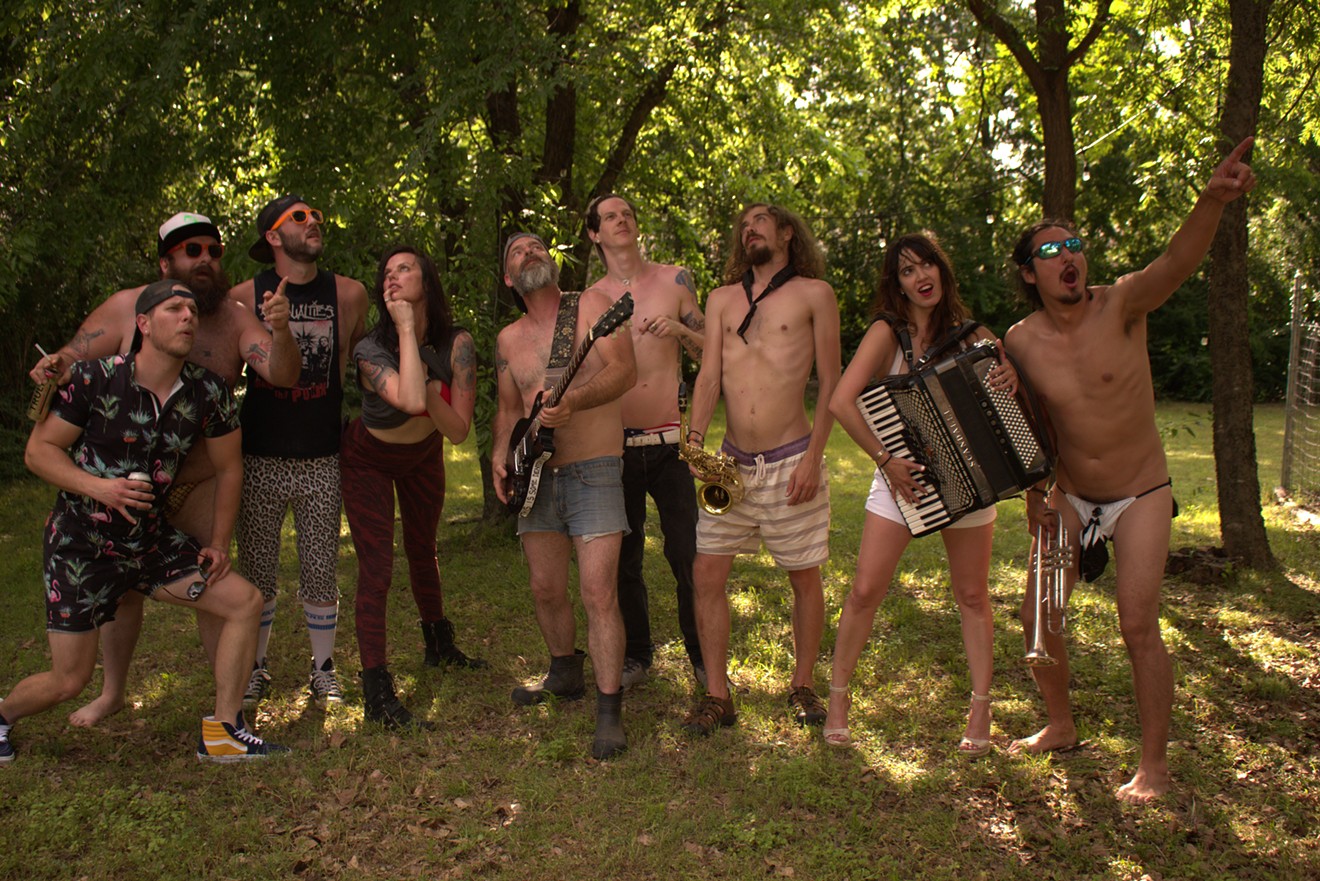 The Wee-Beasties are looking forward to putting their car wash funds to good use. Carley Elsey
It was right after churches let out Sunday afternoon. An older couple was driving down Hickory Street toward the Denton Square, possibly discussing their lunch options. The woman turns her head away from her husband as they approach Fry Street, looks to her right and sees Richard Haskins, the big-boned front man of The Wee-Beasties, wearing nothing but a worn-out pair of shoes, his band’s trucker hat, Riprocks-labeled sunglasses and a golden, mermaid print speedo.

A bright pink sign held by his bikini-clad friend Stefani Cofer beckons “Vroom, vroom… Let us give you a SQUIRT – The Wee-Beasties.”

A water balloon launched by bass player Paul Burke comes flying overhead, just missing Haskins and landing on the pavement, splashing the wheels of the couples’ car as they drive off visibly disgusted.

That kind of salesmanship might have been lost on the after-church crowd. The group of motorcyclists having some drinks across the street at Cool Beans, however, are hooked.

The four engines rev up, move slowly across Hickory and pull into the punk rock car wash.

“We needed to raise some money for the record, and I didn’t want to do a GoFundMe, ‘cause that’s just, like, asking for shit,” Haskins says, waiting for the lights to change and send the next group of cars his way. “No! We’ll work for it. We’re the hardest fuckin’ working band in Denton. Let’s earn it.”

Haskins brought the idea of asking Riprocks owner Paul Bruno if the band could use their back parking lot for a car wash to raise funds to Holloway, who set to work on turning the idea into a reality.

For all the shenanigans going on in front of the bar, the Holloways' heroic ability to manage the most infamous band in Denton was readily apparent in the donation packages offered. $10 suggested donation for a wash and a koozie. $50 for a wash, koozie and bandana. For $69+, patrons were able to get all of the above, plus a detail.

“Can I get that 69 detail?” became the running joke shared among the band for the rest of the afternoon.

One might expect a joke from the Beasties, but what one might not expect is that this punk rock car wash was actually a success.

While the band didn’t have any specific goal in mind, none of the band’s nine members expected to make more than $1,000 washing cars for a couple of hours. But they did.

“Make it a party and people will come,” Haskins says as the band finishes detailing the final car. “Even if it wasn’t monetarily successful, everybody who was there was happy that they were there.”

The Wee-Beasties were thrilled with how the car wash went even before they counted the money.
Carley Elsey
When the business of the midday has concluded, the “hardest fuckin’ working band in Denton” still has to tend to some more business. That is, the business of being a band.

Piling into a handful of freshly washed cars, the band headed to Holloway’s home to run through a short set of songs. To call it a "band practice" would be a bit of a misnomer. This short set is not about working out any kinks in their songs. It's about sealing the bond that elevates this group of nine men and women from a band to a family.

Haskins arrives after making a quick beer run with sax player Matt Cochran. The band gathers at the side door of the house, shotguns one or more Lone Stars and gets to work setting up for the rehearsal.

Holloway’s living room, roughly 500 sq. feet, is a tight fit for two singers, two guitar players, an accordion player, a sax player, a bassist, a drummer and a trumpeter, but its shoebox layout makes for an acoustically perfect place to crank out some post-hardcore tunes before the sun sets and her sheriff neighbor has anything to say about it.

“I’ve been with the Beasties for two years,” Holloway says. “I’m the manager, but the boys in the band call me 'momager,' though. That’s for sure. Every time we rehearse, I cook food and I always make sure that all the things are done.

“I’m his other half; I won’t say his better half, just his other half,” she says turning to Haskins. “There’s this synergy that happens between Richard and I. I don’t know exactly how that started or where that’s going to go, but ever since we’ve done this, it’s just been dynamic.”

A successful car wash is a testament to the dynamism of Holloway and Haskins' relationship, but seeing the band well-known for its wild antics come together with studio precision is another.

The Wee-Beasties formed back in 2000 as a three-piece punk band. It was in the band’s infancy that Haskins started performing in a speedo after a woman working the door at a New Orleans club jokingly asked if they were the band with the lead singer who performs naked. He answered “yes,” and the rest is a near 20-year struggle of break-ups, line-up changes, arrests, club bans and other controversies.

“God put these people in my life,” Haskins says looking around at the eight well-vetted people who now make up the band. “I really do believe that.”

“We’ve had to make some tough calls,” Holloway adds. “The band always has to come first … We do a lot of fun stuff. All of this is fun for us, but there is a business side of it. Lucky for us, we have a band full of absolutely amazing talent, amazing humans, who put the time into it and the energy into working towards a common goal.”

Haskins and company are still dressed in their car wash regalia, sun-fried and full of booze. The rehearsal feels more like a venue performance as Haskins sways in his boyish manner, turning his heels out and his knees in, falling to his knees screaming and rising to hold his microphone up to each musician and letting them give it their all.

They keep their new material under wraps, however, acknowledging that there are outsiders present. That material is being saved for The Panhandle House recording studio when the Beasties put their car wash earnings to use.

When the rehearsal comes to a close, the Beasties make their next move to an afterparty hosted at Cofer’s home to spend the evening with their extended family of friends.

The Wee-Beasties gather together for rehearsal at "momager" and singer Stephanie Holloway's home.
Carley Elsey

If you ever wondered if the high volume of alcohol consumption ever gets to the band, the answer is an absolute yes.

After the band arrives at the little backyard barbecue, guitar player Kyle Harper finds a nice spot on a blanket to rest his badly sunburnt body and sleep away some of the alcohol.

Harper comes to after momager Holloway delivers a plate complete with a burger, chips, cheese balls and potato salad, and he notices the crowd that has circled around him as he slept — not to mess with him, just to be there for a fallen comrade.

“Thanks for coming to KyleFest,” Harper says, sounding a bit confused, dipping a Dorito into his potato salad. “I just wanted to lay down. I wasn’t expecting all of this.”

Harper doesn’t really regain his spirit until the instruments come out. He takes turns with a djembe, congas, a guitar and a melodica. The last one he has a little trouble with, forgetting that to make the keyboard work, he hast to continue blowing into it.

“Music always brings me back to life,” Harper says. It's something that everyone in attendance could relate to.

Haskins walks up in the midst of all of the improvisation, takes a seat next to a friend who happens to be using the congas and starts playing a little something.

The rest of the party comes over following the sound of the music, curious to hear what Haskins has up his sleeve.

“Teddy sniffing glue he was twelve years old / Fell from the roof on East Two-nine,” he sings, catching the ears, hearts and minds of the punks who have gathered in what looks and feels more like a hippie drum circle.

The party begins to dissipate after the singalong. Even Haskins admits that he is a bit faded at this point in the long day. The handful of people who remain retire to Cofer’s garage for a smoke and quieter conversation before ultimately saying their goodbyes.

The Wee-Beasties might have a history as one of the most controversial and chaotic bands in North Texas, but to spend the day with them is to see how organized that chaos truly is.

When Holloway introduces the band, “We’re The Wee-Beasties, and we’re from Denton, fucking, Texas,” the emphasis is just as much on the band as it is on the city from which they hail. Their success — both recent and future — depends on a community who hosts them, feeds them and truly loves them.

Haskins likens the band’s act to that of a wrestling match. “Why do people go?” he asks. “Is it because they’re going to see two fake fighters? No. It’s the spectacle.”

Haskins was found asleep on the couch the next morning holding a half-eaten block of cheese in his hand.
Lora Ridl
KEEP THE DALLAS OBSERVER FREE... Since we started the Dallas Observer, it has been defined as the free, independent voice of Dallas, and we'd like to keep it that way. With local media under siege, it's more important than ever for us to rally support behind funding our local journalism. You can help by participating in our "I Support" program, allowing us to keep offering readers access to our incisive coverage of local news, food and culture with no paywalls.
Make a one-time donation today for as little as $1.